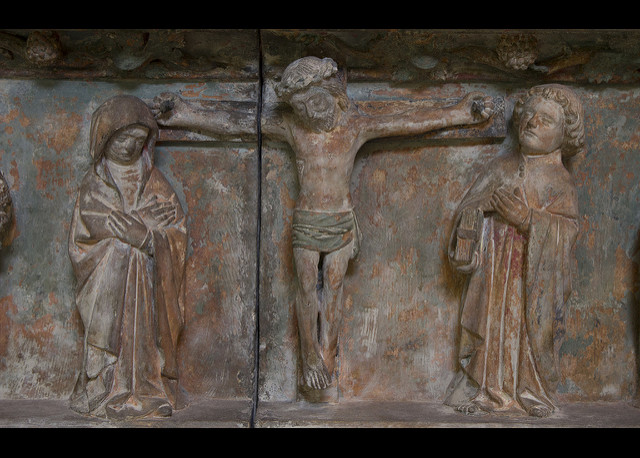 Behold the Silent One

Good Friday. fr Timothy Radcliffe reflects on the silence of Jesus Christ in his birth and in his death.

This year Good Friday falls on March 25th, the day upon which we usually celebrate the Annunciation. It may seem odd that the same day is linked with Christ’s conception and his death. But in the gospels the new-born child is from the beginning seen as the one who will die for us. He is lain in a manger, the feeding place for animals, evoking the Last Supper when he shall become our food. The magi bring him myrrh, which is used in the anointment of the dead. The baby is wrapped by his mother in swaddling clothes mother as he will later be wrapped by the women in linen cloths for burial.

In in T. S. Eliot’s ‘The journey of the Magi’, one of them says ‘I had seen birth and death, but had thought they were different; this birth was hard and bitter agony for us.’ So the Christmas child is the one whose whole life is pointed to the final gift of his very being, that we may live.

How does this intersect with our daily lives? Either end of the arc of Jesus’ short path on this earth are marked by a lack of speech. The baby can cry and scream but not speak. As Jesus comes his end, the Word is, in a sense, extinguished. The first reading from Isaiah prophesied: ‘Though he was harshly treated, he submitted and opened not his mouth; like a lamb led to the slaughterer or a sheep before the shearers, he was silent and opened not his mouth.’

In Mark and Matthew’s accounts, he is taken silently to the cross, and his life ends in a terrible cry of abandonment. In John, he slowly slips into silence. When the soldiers come to take him in the Garden of Gethsemane, he boldly proclaims the divine name – ‘I am- – and they fall to the ground in terror. Before Pilate, he still claims his kingship, but which is not of this world, but more discreetly. When he shown to the crowd – ‘Behold the man’ – he is silent. He says nothing more, except bid farewell by handing over his mother and the beloved disciple to each other, and then ‘it is finished.’

This man of debate and conversation, this wise and witty teacher and preacher, is made dumb. Until in the garden a stranger meets Mary Magdalen and asks a question: ‘Woman, why are you weeping? For whom are you looking?’ The Risen Lord breaks the silence of the tomb and never again will be extinguished.

In the Bible, silence is the shadow of death: ‘The dead praise not the LORD, neither any that go down into silence.’ (Psalm 115.17). It belongs to our human dignity and our call to be the children of God that we speak and are heard.

Think of the many who plunged into inarticulacy in our world: refugees who have fled from war in Syria and struggle to find words in the alien tongues of their lands of exile; children who have been abused and who cannot share their terrible secret; women who are beaten up at home but who can only avoid worse if they keep mum.

All of these are silences which cry out for a word. But it easy for all of us to impose silence on each other. A glance can warn another not to stir things up. Unpopular thoughts are not shared. It is easier to keep quiet than risk disapproval. Better to wait for another day. But to accept this silence is to let the shadow of death to fall upon us.

On Holy Saturday, Jesus was silent in the tomb and then the victorious Word spoke again. One of the ways in which we shall celebrate the Resurrection is in refusing those silences in which good words are repressed. We serve the young, the uncertain and afraid, those on the edge, by helping them to break their silence. Maybe initially they cannot find the right words, and what emerges more like a scream than a statement, but they are on the way to finding the right words, and share in the victory of Easter morning. We too must dare to speak.

For the Holy Thursday homily by fr Thomas Skeats, Sharing the Life of God, click on the link under Recent posts in the right hand sidebar.

The image above is a medieval retable in the Burrell Collection, Glasgow.