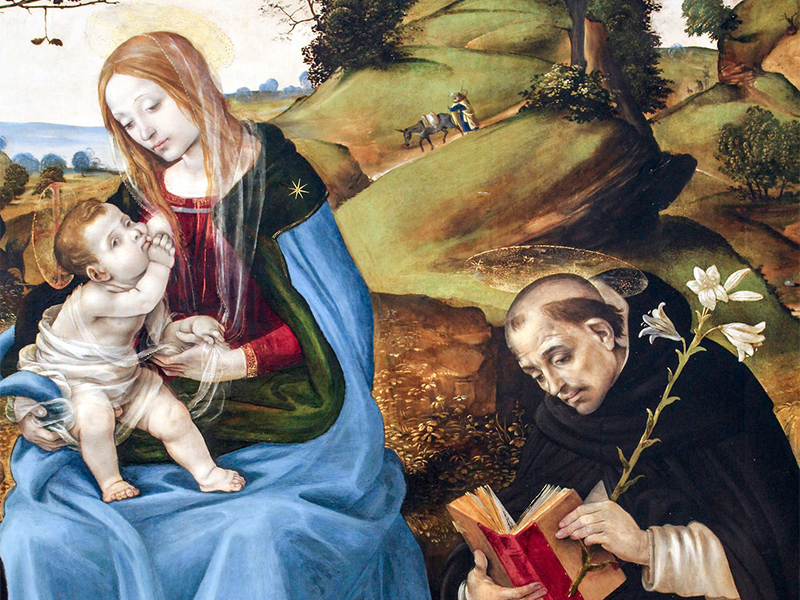 Solemnity of Mary, Mother of God. fr Simon explains how Mary through her Motherhood shares in the life of her son, Jesus Christ.

Today’s Gospel takes us beyond the biological fact that Mary was a biological mother. It tells us more about her motherhood than that she gave birth. We learn how Mary, together with Joseph, had the baby circumcised when he was eight days old, introducing him into the covenant between God and the Jewish people. At the same time they gave the boy his name, Jesus, which means Saviour, because he would save this people – and all peoples – from their sins.

With these actions, we see Mary undertaking the ongoing work of being a mother, treasuring every moment of this motherhood in her heart, just as she had already treasured her Son since she conceived him in her womb. Mary’s motherhood is not simply to conceive and give birth as a biological fact. Together with Joseph, she has the responsibility of nurturing the one who gives life to all. Together with Joseph, she has the privilege of drawing the Word of God to speak human words in a human language, to oversee the growth in wisdom of the one who is true Wisdom and the Teacher of all.

Together Mary and Joseph initiate the boy into the covenant he himself had made; their family life brings him experience of the law he himself had given Moses on Mount Sinai. And so in bringing up their child in the wisdom of God’s law, they will find him to possess a Power and a Wisdom they cannot comprehend. Mary had conceived a Wisdom in her womb that she cannot fully conceive in her mind. Eventually, when they find Jesus in the Temple, after losing him for three days, they will have to confess that the boy shows a Wisdom and a Power they simply cannot truly grasp, but must accept in faith.

Just as Mary’s motherhood was a mystery to her from the beginning when an angel told her she, a virgin, would conceive, so her motherhood is again a mystery she can only ponder in faith. There is so much that Jesus has – the power to work miracles is but one – that does not come from her. When she asks him to provide wine at the wedding in Cana, he replies, ‘Woman, what have you to do with me? My hour has not yet come.’ Jesus performs the miracle at his mother’s request, but this event doesn’t fully reveal what the relationship is between Mary and Jesus, because his power to work miracles comes not from his mother but from his Father who is in heaven.

But the words ‘My hour has not yet come’ point us forward to the hour of the cross when Jesus will say to Mary, ‘Behold, your Son.’ It is here that the importance of Mary’s motherhood is fully revealed to us. Her motherhood did not give Jesus the power to work miracles, but it did give him a body in which he could suffer, and save us from our sins. The full meaning of the Mother of God is that Mary gave to an invulnerable God of miraculous power, the vulnerability of a body which could suffer, die and save. And so we honour her today, because it was she who gave us our Saviour, the Mother of the Saviour, the Mother of God.