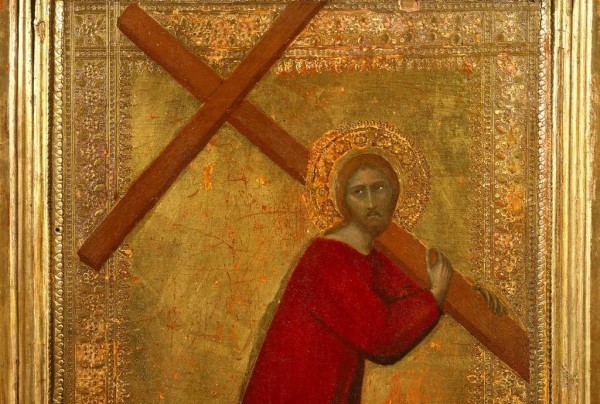 Twenty-Fourth Sunday of the Year. Fr Robert Ombres preaches on the transforming power of Christian discipleship.

Today’s gospel is demanding. It is demanding because it makes us think about ourselves at a deep level, and because it makes demands on us.
As Christians we are disciples of Christ, we take our most fundamental identity from being in him. Baptism, we believe, can never be undone and it changes us at a level so fundamental that it can be described as ontological. By baptism we die to our former selves and enter a new, risen life. What we believe about Christ literally, that he died and rose, is to be believed about ourselves sacramentally.

It is a lifetime’s task to come to understand these truths about our identities, and to live them out daily and to the end. In today’s gospel, Peter begins confidently and correctly to acknowledge Jesus as the Christ – but he misunderstands the implications of this. When the identity of the Christ is revealed to him as involving Jesus’s suffering, death and resurrection, Peter does not accept this. He is firmly rebuked by Jesus.

Jesus then turns to speak to a larger group. We should consider ourselves as being addressed by him: those who want to be followers of mine, let them renounce themselves and take up their cross and follow me. Anyone who loses their life for Jesus’s sake, and for the sake of the gospel, will save it.

To renounce self: there is something both incomplete and flawed about us, especially because of the effects of sin, original and personal. It is by responding to God’s saving grace that we can renounce the limitations of our old self, our former identity, and be transformed into a new creation. Of course we remain substantially the same person throughout, but following Christ involves constant renunciation, a turning away from a lesser to a better and more complete self. There is an unmaking and a remaking of attachments and values.To take up our cross: this is something for us to do, it is an activity. The daily renunciation of a self that is passing away becomes most dramatic and definitive at death – and dying is the action of a living person. In dying and in death we will not be separated from Christ, we will in fact still be following him. This is why a Christian death is not a lonely leap in the dark. It is a leap accompanied and made possible by Christ into ever greater light.

The cross to be carried during the life of each one of us will not be the same for everyone. Bearing a cross may take the form of suffering discrimination, persecution and even martyrdom. Today such crosses are not rare. Or it might be called the martyrdom of conscience, when in varying ways each of us in fidelity to Christ makes demanding and even painful choices about what to do or not to do. This can affect our relationships, our jobs, our plans, our aspirations.

Because Christ has suffered, died and been raised could we not simply join him in that last stage – in other words, could we not have the resurrection without the suffering and the dying? But this would be precisely to deny our following of Christ. He is not only an ideal, he is a pattern for us. Not conforming to Christ would be to think that our fallen natures could blossom into grace without sharing his saving and costing intervention. It would be to underestimate the grip on us of a passing world and an incomplete self. It would mean wanting to be free from false attachments and sin just by wishing them away, as we would wish away those who oppose goodness and truth. Evasion is not a way to salvation. The prophet Isaiah speaking in our first reading was painfully realistic yet stayed hopeful:

The Lord comes to my help,
so that I am untouched by the insults.
So, too, I set my face like flint;
I know I shall not be shamed.

Virtue can find it difficult to make its way in a fallen world. The cross to be taken up by each one of us is fashioned when our following of Christ is opposed by the weakness and sin in ourselves and in others.