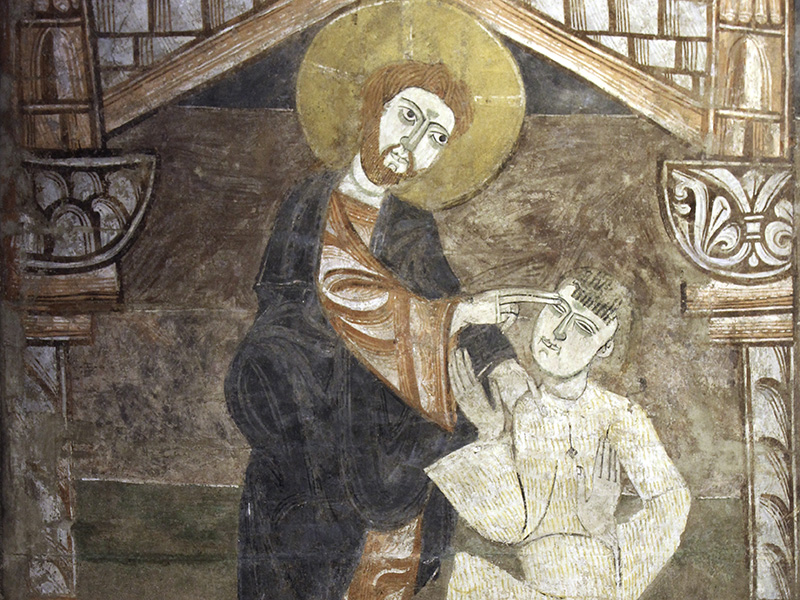 Fourth Sunday of Lent (A)  |  Fr Robert Ombres considers Christ as the Light who helps us to see in dark times.

There are ways and ways of seeing. In today’s Gospel, a man born blind is given sight in a doubly extraordinary way. He is given by Jesus ordinary sight, except that this gift came to him in an extraordinary way. It was by way of a miracle. Receiving sight was also for the man a sign of something else, in fact, a sign about someone else. The man who had been blind is given by way of faith to see who cured him, in all his depth. Once he has the eyes of faith he believes in Jesus, and worships him.

As the season of Lent unfolds, we are sharply aware of the clouds that gather around Jesus, how the darkness of his suffering and death increases. The increasing darkness is ominous of very dark deeds to come. ‘As soon as Judas had taken the piece of bread he went out. It was night’. In the Gospel we have just heard, Jesus says that the night will soon be here, yet while he is in the world he is the light of the world. Later in the same Gospel, Jesus will say that he has come into the world as light, to prevent anyone who believes in him from staying in the dark any more. Nobody who walks in the dark knows where he is going. The effects of the light, we are told by today’s second reading, are seen in complete goodness, right living and truth.

This Sunday is also called Laetare Sunday, a day of special joy. The sombre violet vestments of the celebrant at Mass can be exchanged for more radiant rose-coloured ones. This is for us an encouraging glimmer of hope, a radiant flash of light amid the encircling gloom. It is a kindly light that leads us; rather, it is a kindly light who leads us. We can rejoice, we are invited to rejoice, because our joy is constructed out of something reliable, and not mere wishful thinking, a whistling in the cosmic darkness. How the Gospel multiplies these reassurances!

‘What has come into being in him was life
life that was the light of men;
and light shines in darkness,
and darkness could not overpower it’.

The vestments may be rose-coloured, but Christians do not look at the world through rose-tinted glasses in the sense of unfounded optimism. There is much, there are many people and situations, calling on us to look with truth and compassion. The One who is light is also truth. We cannot deny that there is a darkness even after Christ’s resurrection. It is a residual and lingering darkness which can dim the light for us though not extinguish it. Till Christ’s total radiance is definitively revealed, we live in a time when drifting clouds can obscure the sun. The sun is there unfailingly every day, but at times we go forward with less than clarity and with stumbling steps. Yet our hope is grounded on God’s gift to us, not on the resources of a natural optimism we may or may not have.

Not everyone rejoiced at what had happened to the blind man. He used to beg, he was a marginalised person. Once healed, he was not believed by everyone and was driven away. For some, the man who had come from the margin of disability and poverty was still to be kept at bay. Jesus took yet another initiative. When Jesus heard that they had driven away the formerly blind man, he went and found him. There was more light to be given to the man, the light of faith of which the giving of natural sight was a sign. The One who is light is also love.

The healing is done by Jesus spitting on the ground, making a paste with the spittle and daubing it on the man’s eyes. It is an extremely tactile process, described in a detailed and prolonged way. This is not love from a distance. After that, far from wanting to drive the cured man away, Jesus goes and finds him. Jesus is reconstituting our damaged humanity, our communion with God and each other. We can hear echoes of Adam’s creation in what Jesus does to the blind man; Genesis in a fallen world.

We often speak about coming to understand something we had not understood before as a ‘coming to see’: ‘now I see’ can mean now I understand. The cured man was brought by love to see not just the natural world, but also to see and share in the world being transformed in Jesus Christ.

Photograph by Fr Lawrence Lew OP of Christ Healing the Blind Man, mid-12th-century mural from the Hermitage of San Baudelio de Berlanga (Soria), and now housed in the Cloisters Museum in New York.