Twenty-third Sunday of the Year. Fr Benjamin Earl preaches about prudent budgeting and the generosity of God.

Of all the things the Church affirms, perhaps one of the least controversial is that prudence is a virtue. And anyone who has that virtue will know by second nature that if one is about to embark on a major project, a certain preparation is necessary. There needs to be a feasibility study, there needs to be planning, and there needs to be a budget.

I have the privilege of living at Santa Sabina in Rome, where the Basilica was built some 1600 years ago by the priest Peter of Illyria. We no longer have his feasibility study or budget, but clearly the project was feasible and he managed to pay for it… though I would not be surprised if it was over budget, because construction projects almost always are. What Peter of Illyria certainly would not have known then is how long his church would be around, or the amount of money that would need to be spent on maintenance in the course of a millennium and a half. He certainly couldn’t have imagined our electricity bills, but then neither could we a year or so ago.

In various parts of the world, including some not too far away from us, a more gruesome accounting is going on: counting the human cost of war. No doubt those involved budgeted for a certain cost, both economic and in lives. However, as is all too often the way in conflict, the cost seems to be beyond what is budgeted, and the accounts are being written in the blood of the young, who were not the architects of this fratricide.

There is a well-known prayer of St Ignatius of Loyola ‘for generosity’ which runs as follows:

Teach us, good Lord, to serve thee as thou deservest:
To give and not to count the cost;
To fight and not to heed the wounds;
To toil and not to seek for rest;
To labour and not to ask for any reward
Save that of knowing that we do thy will.

At first sight it might appear that St Ignatius – who knew a thing or two both about new foundations and about war – is contradicting the teaching of Christ; but in reality what both Christ and Ignatius are telling us is that the true disciple of the Lord is prepared to give all that he or she has, and indeed to suffer mocking, pain and even death for Christ. The cost of ‘serving the Lord as he deserveth’ is everything. And if we have to give everything we have and everything we are, that makes the arithmetic a lot simpler.

Given the high cost of discipleship we might be tempted to ask, ‘why?’ Why can’t God just let us give, say, ten percent of what we have, and maybe a few hours a week for works of piety and charity, and let us be?

Heeding the teaching of the Book of Wisdom in today’s first reading, of course I cannot presume to know all the intentions of God. But what we do know of his intentions we know from the Wisdom by which we were formed, and whom God has sent among us to ‘be with [us] and toil, and that [we] may learn what is pleasing to you’. By this divine Wisdom – who is Christ among us – we are taught and are saved.

What Christ shows us is the Lord who humbles himself to become a human being, who empties himself, who has no place to lay his head, and who ultimately shows his love by giving himself willingly to suffering and death. To be his disciple is precisely to follow him: that is, to take up our cross as Christ took up his cross.

That is the cost. Those are the wounds. That is the toil and labour of the Christian. That is the will of the Lord, the doing of which is the only reward that counts.

Image: interior of the Basilica of Santa Sabina, Rome, photographed by Steven Zucker

Categories:
23rd Sunday of the Year 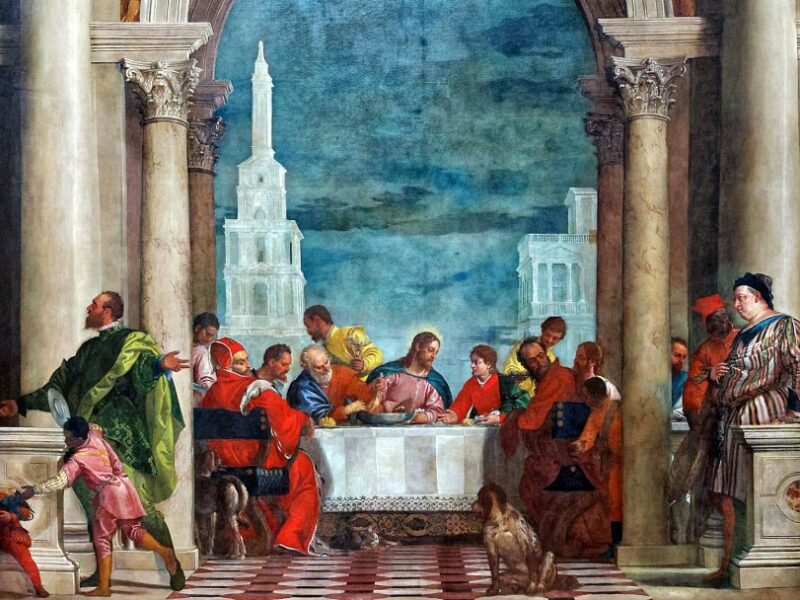