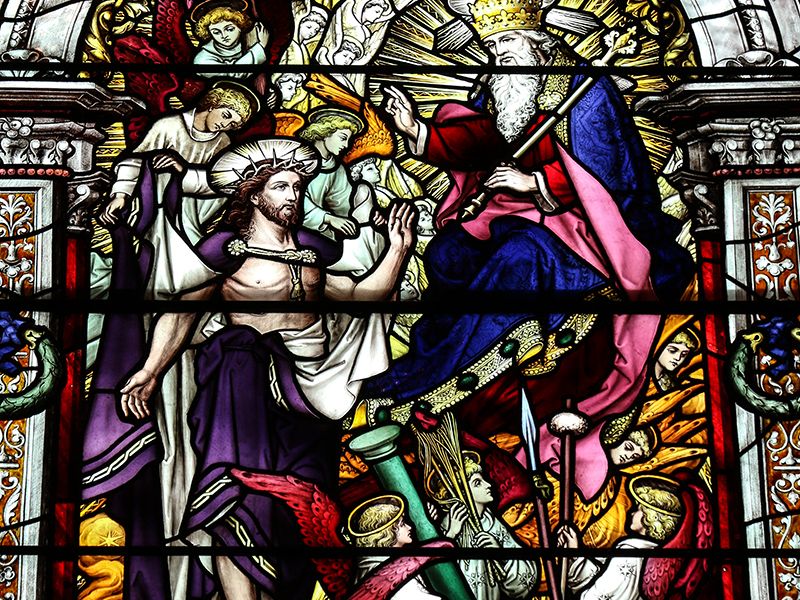 Sixth Sunday of Easter (C)  |  Deacon Toby Lees explains the two natures of Christ, and says that through the Incarnation of Christ God invites us human beings into the life of the Blessed Trinity.

According to one account of the Council of Nicea in 325AD – the very Council which gave us the Creed that we affirm each Sunday after the homily –  one bishop, St Nicholas, yanked the beard of a priest and punched him in the face when he proceeded to spout heresy.

Now the man whose beard was purportedly rudely and roughly yanked was named Arius and he was accused of several heresies, but the one which is most relevant to our Gospel today, is the heresy of ‘subordinationism’: which is a view which tends toward seeing the Son as mediating between God the Father and the rest of creation, with the Son existing in some undefined middle ground between the two, not truly divine, but not truly human either. Now I hope that you’re thinking, ‘Well, I certainly don’t believe that, I believe that each of the Father, Son, and Holy Spirit are God, that the Persons of the Trinity share the same Divine nature, and that none is the inferior of the other’. If so, well done your catechism teacher!

But, the problem is that when we read today’s Gospel, it might start to sound like Arius had a point, and we might start to think that maybe he didn’t deserve to have his beard tugged after all and that St Nicholas really ought to be writing somebody a note saying, ‘I’m sorry I tugged your beard for being a heretic, I was wrong’. Because there are least three things which Jesus says, which Arius could turn to in support for his view:

First, Jesus says that it is the Father who will send the Holy Spirit, albeit He will do it Jesus’ name.

Second, Jesus, says the word which we hear from Him is not His own, but that of the Father.

And thirdly, and seemingly most crushingly for orthodoxy and the argument of the equality of Father and Son, Jesus tells us that the Father is greater than Him.

What are we to make of this? It starts to sound an awful lot like Arius may have had a point!

But when we think and pray more on today’s Gospel; when we think and pray on today’s passage bringing to our reading of it the Faith of the Church, and being docile to the Holy Spirit whom the Father has sent to remind of us all Jesus has said . . . when we do this, we start to go beyond the meaning that makes sense of a sentence as a standalone sentence, and we begin to embark on the task of trying to understand the sentence within the context of the Gospel, within the context of the Bible, within in the Faith of the Church.

Now hopefully, you’re on board with all of this, but what then of Jesus’ claim that the Father is greater than He?

Well, the first thing to make clear is that reading this line as a denial of Jesus’ divinity is incompatible with what we recite in the Creed, and it’s also incompatible with the rest of John’s Gospel, which in the very first verse tells us that ‘In the beginning was the Word, and the Word was God’. It’s also incompatible, with that moving scene in one of the very last sections of the Gospel, when St Thomas sees the Risen Lord’s wounds and proclaims Him, ‘My Lord and my God’. Upon Thomas’ acclamation, Jesus offers no corrective, in fact, he affirms the truth of it, and says that ‘Blessed are they that have not seen and yet believed’.

So we’ve got to find a reading of ‘the Father being greater than the Son’ which does justice to Jesus’ divinity, but doesn’t do violence to the literal sense of what Jesus is saying.

Now it’s the case that John’s Gospel is often spoken of as having the highest Christology and this is true insofar as it’s the one in which even to the modern reader, with no Old Testament or other contextual background, the divinity of Jesus is most obvious, but it’s less commonly observed that John’s Gospel is also the gospel where Jesus is also most obviously human. He weeps, he gets angry, he’s hungry, he thirsts. The Gospels show us that Jesus is fully human and fully divine. And this is Good News, because if He is not divine, He could not save us, and if He is not human, it would not be us, our humanity, that He assumes and saves.

There are then passages in the Gospel in which Jesus emphasises His divinity and in others His humanity, and, in any given passage, we need to consider which it is, lest we end up with a very confused reading. And in the particular section that we’re looking at in today’s Gospel, Jesus seems to be speaking in human terms about himself. In the preceding passages Jesus has been talking of his crucifixion and death which are now imminent, but now he’s also talking about his ascent to the Father after his resurrection.

And the Ascension which we’ll celebrate on Thursday is very important because another clue that Jesus is speaking with respect to His human nature is that in His divine nature He has never been away from the Father; so when He speaks of going to the Father in this Gospel passage, he must mean that He is going to do so in His full humanity, not just His Divinity which could never be other than with the Father.

So recognising that Jesus in our passage today is focussing on His humanity, we can start to appreciate not only how Jesus properly speaks in this context of the Father being greater, because an uncreated, omnipresent, purely spiritual being, unconstrained by the limits of time and space is evidently greater than a finite and limited human nature, but also that this passage is revealing to us something really quite magnificent and completely unprecedented: Jesus in His human nature, in a body which shares our finitude, our weakness in all things but sin, is going to be glorified and is going to enter into the life of the Trinity in heaven. Jesus in his full humanity and full divinity will be at the right hand of the Father, and from there He will send the Spirit, opening up the way for us, through the gift of His grace, to follow Him and to come to dwell with the Father also.

The Ascension of the glorified, resurrected body of Christ to the right hand of the Father, not just in his divine nature, which has always been the case; but in the human nature which he assumed in the Incarnation, is our invitation into the life of the Blessed Trinity. This is astonishing and a cause for joy; it’s more than we could ever have imagined, and it’s a much richer vision than the reading of Arius, which ultimately negates Jesus’ life of anything but a moral example. Yes, Jesus calls us to love Him and to keep His word – He still is a moral example – but keeping His word becomes possible and it becomes joyful because the Father and Son come and make their home within us, and so our keeping the word of God, keeping His commandments ceases to be something extrinsic to us – it is not some external obligation at odd with our happiness – but it becomes the living out of our loving communion in the life of the Trinity, who is the source of all our human happiness.