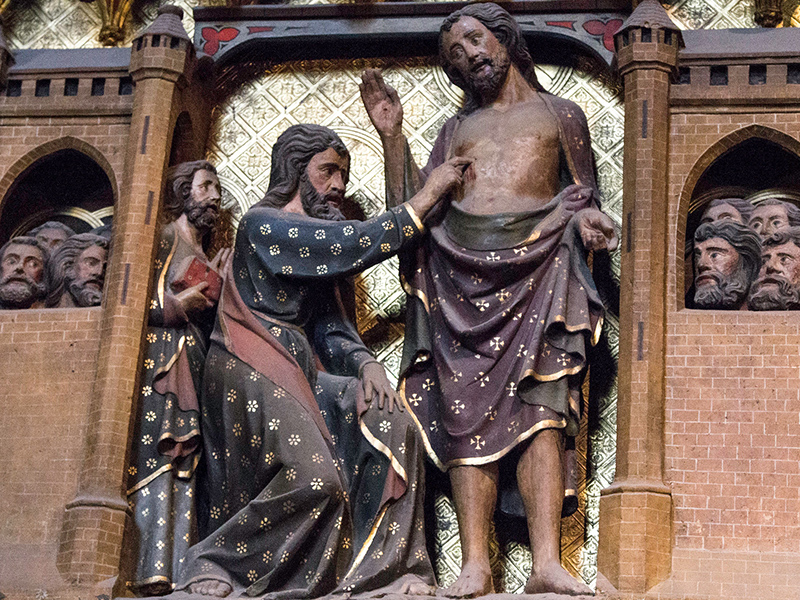 Second Sunday of Easter (C)  |  Fr Robert Verrill considers the usefulness of doubt, and the virtue of knowing when to put doubts aside.

There’s a story about the atheist philosopher Bertrand Russell being asked what he would say if he found himself standing before God on the day of judgment and God asked him “Why didn’t you believe in Me?” Russell replied “I would say, ‘Not enough evidence, God! Not enough evidence!”

For some people, no amount of evidence would ever convince them to believe in God and in Jesus’ resurrection, but in today’s Gospel, we don’t hear of the obstinate disbelief of a cynical atheist, but of someone who is struggling. The disbelief of the apostle St Thomas reflects the doubts of someone who would very much like to believe in Jesus’ resurrection, but he just finds it too astonishing to accept.

Now although St. Thomas struggled to believe in the Resurrection, Our Lord didn’t abandon him to faithlessness, for in His great mercy, Our Lord transformed St. Thomas’ disbelief into an act of faith that went beyond what any of the other apostles said. For when St. Thomas finally met the risen Lord, he not only accepted that He had risen, but in his confession ‘My Lord and my God,’ St. Thomas was admitting that Jesus Christ is truly divine. This is the deepest truth there is, and no amount of empirical evidence can make you believe it. It’s only by the gift of faith that anyone can say that Jesus is God.

So, St Thomas the Apostle isn’t revered as a saint because of his doubt, but because of his act of faith when he finally did encounter the risen Christ. Therefore, if we should ever struggle with doubts of faith, we can look to the witness of St Thomas, for he shows us that the power of the resurrection far surpasses any doubts we might have.

Nevertheless, for many people in the modern world, doubt is not something to be avoided, but rather it is to be embraced. Skepticism is often held up as a model of virtue, that the only way to attain any reliable certainty is to start from a position of doubt. Now clearly, in the realms of natural science, the method of doubt has been extremely successful, but the problem is when this methodology is applied to absolutely everything else. For there is surely a virtue to doubting, and this doesn’t mean doubting everything. Rather it means knowing when it is good to doubt and when it is good to simply believe. For instance, in our human relationships, there needs to be a degree of trust if we are to relate properly to one another.

Now when it comes to the resurrection, we still need evidence to believe in it, but we do have the evidence: we have the Gospels, we have the witnesses of the martyrs, and we have the living tradition of the Church. In the light of faith, which is by definition “the evidence of things not seen” we have all the evidence we need. To ask for more evidence is to lack the virtue of knowing when to put doubts aside.

Now this virtue requires humility. It requires us to accept that the deepest truths of all are not something we can work out for ourselves, for we can only accept these truths in the light of faith.

In our weak human nature, we may struggle to believe that Jesus is truly Divine and that He died and rose again for us so that we might enjoy eternal life, but as St. Thomas the Apostle shows us, the gift of faith more than makes up for what is lacking in our nature. Jesus Christ has given us everything He has in order that we might believe in Him and love Him, and through His infinite patience and mercy, we can embrace this astonishing reality and be transformed by it.