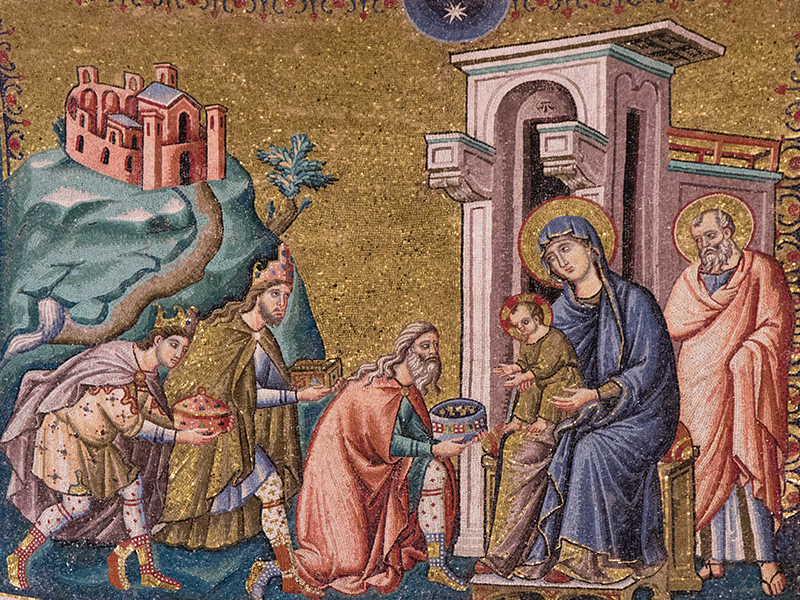 Epiphany of the Lord (A)  |  Fr Dominic White reflects on the humility of pagans in search of truth, and he asks if we might occasionally take for granted what God has given us.

Even the most highbrow of newspapers often include horoscopes in their weekend supplements. What are the stars revealing about my future? Probably not very much actually, as a casual inspection shows that often the astrologers don’t even agree with each other! Following Scripture, the Church condemns the practice of astrology: it shows a lack of trust in God, and a desire to control others and the future (Catechism of the Catholic Church, 2116). This doesn’t mean that the stars may not have some unconscious influence over us, just as the moon influences the tides. But they don’t take away our free will or God’s power for those who trust in Him.

Well then, what about these wise men from the East, or three kings as they’re more popularly known? They were astrologers. “We saw his star as it rose”, and indeed it was the star that led them from Herod to the place where Jesus, Mary and Joseph were staying.

Now the word for “wise men” in the original language of St. Matthew’s Gospel is magoi. Magi are priests of the Zoroastrian religion, which is still practised by about 200,000 people across the world, most of them in India and Iran. They have a temple in Westbourne Park in London. Zoroastrians believe in one God, practise astrology, and believe an ongoing cosmic battle between good and evil is going on, of which humankind is part. When the people of Israel were exiled to Babylon, Zoroastrianism was the main religion of the Babylonians. There are some similarities between the prophet Isaiah, whom we heard in today’s first reading, and the scriptures of the Zoroastrians – most of all the prophecy that a saviour will be born. This was the saviour that the Magi were looking for in the stars. Then something told them that this star – which may have been Halley’s Comet, a meteorite which people would have seen moving across the sky with a tail – this star was announcing the birth of the saviour they had longed for.

So does that mean that astrology’s OK? Well, as I said, astrology as people tend to practice it is about trying to get your own way over other people. The kings of Babylon employed their Zoroastrian astrologers to tell them when the stars were in the right place for them to fight a war and so on. The Book of Daniel shows that a lot of these astrologers weren’t up to much, and most of the time they just told the rulers what they wanted to hear.

But the Magi of the Gospel were real wise men. They were not looking for money or power. They were people seeking the truth, seeking God’s light, God’s love, because that was all that could satisfy them. As soon as they sensed that this was the star of the Saviour, they made their way to Jerusalem, that being the capital and thus where kings should be born. They brought very costly gifts too – gold, because the saviour was to be a king; frankincense, because He was to be a god – and myrrh, because he was to die.

These pagans, wise enough to be humble, show up Herod, who should have welcomed the coming of the Saviour, the Messiah. Instead, Herod is only fearful that this “infant king of the Jews” is going to steal his throne, whereas Jesus was never any threat to him. But perfect fear casts out love, and this ends in Herod’s mass murder of the Holy Innocents.

When the wise men find a poor child, they’re not disappointed or put off. They don’t think the star has brought them to the wrong address. Instead they kneel down and worship. They just take God as they find Him. They experience the meaning of this feast, which is called Epiphany because it’s when God “showed” Himself to people. The Magi receive God for what he wants to give them. And so God’s light fills their hearts.

It’s a humbling story. I expect you have neighbours who are devout members of other religions. I remember once some Hindus coming to our Rosary Shrine in London, and I was very moved by the great reverence they showed to God’s presence in the Blessed Sacrament, and their honour for the saints when they saw their statues. It made me ask myself whether sometimes I don’t take God and the Catholic Faith for granted.

The story of the Magi is a hopeful story, because it shows Jesus Christ drawing people to Himself through the truths which exist in their religions, so that they may find fulfilment and their journey’s end in Christ and the fullness of the Catholic Christian Faith.

But it challenges us too. Are we willing to take God as we find Him (as He finds us), trust Him to lead us rather than telling Him what we want and using all means to get it? It’s very hard to trust God sometimes if you’ve been hurt or feel lost. But deep down we know that these passing things won’t satisfy us (especially when the astrologers can’t even agree with each other), and that real Light – which is a universal symbol of all religions – only comes from God, and when we least expect. So after Mass let’s go to the crib and see that the Magi have arrived. Let’s make it our own pilgrimage, where we take to the Lord not just our wounds, but our gifts (yes, we all have gifts, because God gave them to us in the first place!). What we give to Him, He will give back to us, made glorious. And we in turn will become like God’s stars, full of light even in the darkness, and drawing our neighbours of all religions to the one Jesus Christ.

Photograph by Fr Lawrence Lew OP of a 13th-century mosaic by Cavallini in the basilica of Santa Maria in Trastevere in Rome.