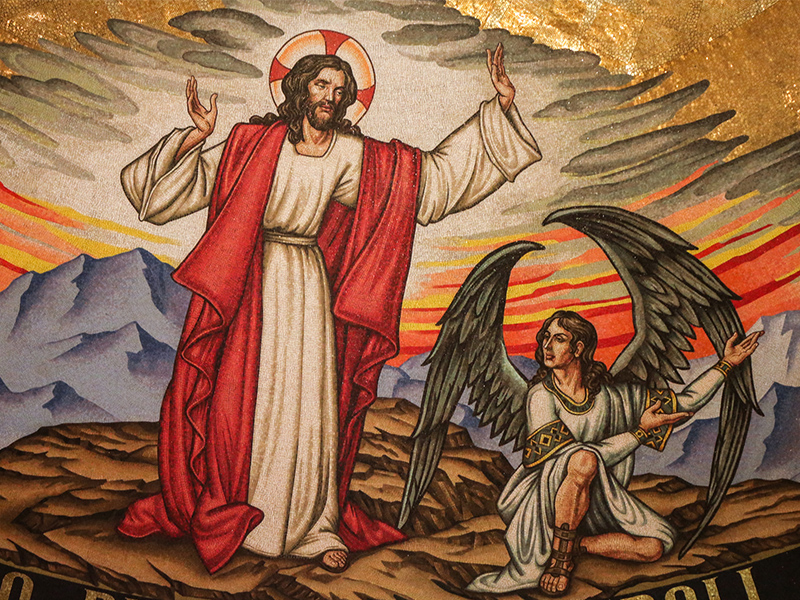 Torch
Home  /  Torch  /  Entering the Desert with Jesus as our Guide

Entering the Desert with Jesus as our Guide

First Sunday of Lent (C)  |  Deacon Andrew Brookes says that Lent can be a desert experience in which we grow in intimacy with the Lord.

Lent is about entering the desert with Jesus. The desert was a significant and special place for the Jews. Entering its harsh environment was an opportunity to spiritually grow through various challenges and trials. One could have intimacy with God there. But that outcome was far from inevitable.

Like the other evil spirits in the Gospels, Satan knew who Jesus is – the Son of God, the Holy One. Satan sought to deflect Jesus from using Divine power and status in accord with the salvific will of the Father.  Jesus saw clearly what Satan was about and refuted him with brevity but insight and authority. This was not an even contest as Jesus is Divine. But there was a cost for Jesus, either at the time or in the future.  In the first place, Jesus was really hungry after his 40 day fast. To continue to fast would have been painful.  Jesus was willing to put aside meeting legitimate physical needs for the sake of doing the Father’s will. Secondly, Jesus was never going to worship Satan, but Satan continued to exercise influence through the empires and institutions of the world. These were involved in the condemnation of Jesus in due course. Finally, Satan suggested Jesus should undertake a spectacular death-defying stunt, and one that would probably impress onlookers. However, Jesus made clear he will do His Father’s will, and not put God to the test. This will was that Jesus accept scandal, suffering and death – being rescued after death and not before it, saving us through that death rather than being saved from it.

The Book of Deuteronomy presents Moses speaking to the new generation of Jews as they are about to enter the Promised Land, exhorting them to learn from the mistakes of their parents, so that they will pass their own trials, grow in love of God, and so remain and grow in the blessings of God, rather than lose them.  Jesus used the exhortations and instructions of Moses to refute Satan in each temptation. Moses had explained that the Jews experienced hunger to learn that ‘man does not live on bread alone’ and that receiving the word of God and keeping the commands was a greater form of nourishment. Secondly, God, and no other power, had saved them, and they were ‘to serve God alone’ if they wished to remain in God’s blessings. Finally, Moses said they should ‘not put God to the test’ by grumbling about God and his providence, or resisting God’s will and deliberately doing things another way.  In his desert trial, Jesus succeeded where that generation of Jews failed and he also fulfilled these exhortations of Moses.  The attitudes that Jesus showed in these temptations continued to shape his public ministry and especially how he offered himself unto death on the cross. Through all this he continued to defeat and despoil Satan and to win us eternal salvation.

Jesus shared his temptation experience with his disciples. It was then written down to help other disciples, including us, in our combat with the flesh, Satan and the world.  What God did for us though the cross of Jesus, he wants to do in us.  That requires us to put on the mind of Jesus and take up our cross and follow him. That is a daily task but we are invited to do it in a particularly focussed way in Lent, a season of desert grace. The tempted Lord, who fasted for us and contested with Satan for us, is with us to help us, a compassionate high priest who knows our struggles. So, at the beginning of Lent let us ask him to show each of us how to discipline our body and restrain our physical needs; how to worship God better in prayer; and, rather than grumble against him or test him, how to serve him by generously obeying his call to love others, dying to our selfishness in the process.

We are asked to enter the desert in Lent. But it does not involve making travel arrangements. If, with Jesus as our guide, we commit to an integrated package of fasting, prayer and almsgiving with trust in God, and if we persist with the attitudes and words of Jesus in the desert, Lent will be a desert experience where we grow in intimacy with the Lord.

Photograph by Fr Lawrence Lew OP of a mosaic in the dome of the Basilica of the National Shrine of the Immaculate Conception in Washington DC.