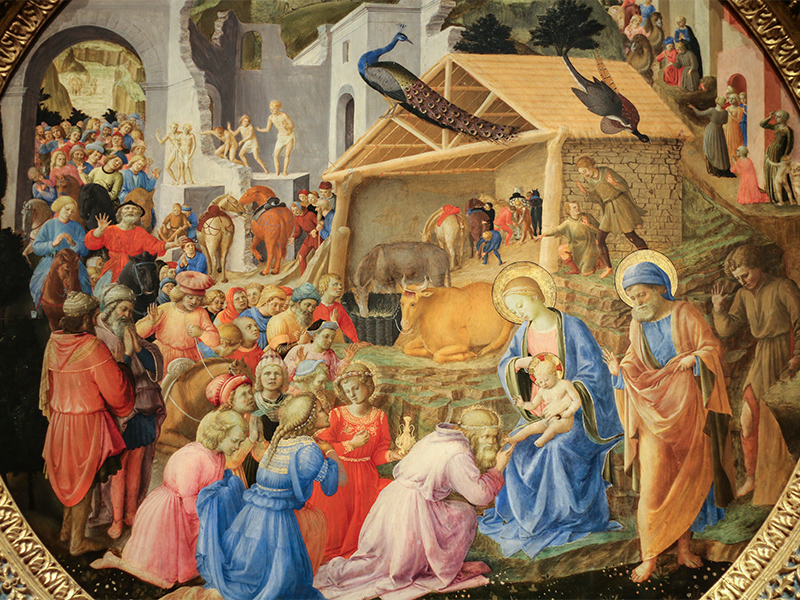 Among your Christmas cards, assuming you are still displaying them at home, is sure to be at least one celebrating the Epiphany. Three gorgeously attired, exotically crowned men, romping across the outback on camels perhaps? Perhaps a vast procession overwhelming the holy family, with three men presenting a precocious baby Jesus with precious gifts? Far more colourful than those poor drab shepherds who abandoned their flocks that we heard about on Christmas night, however romantically sanitised those shepherds may have become in our imagination.

But listen to the story Matthew tells us. Three gifts – yes, but no mention of how many givers. Camels – no mention of them, but the magi had to get to Jerusalem somehow. Kings – Herod is the king, the gift-bearers are “wise men”. Stars halting over the place where Jesus was – some very odd astronomy here.

Let’s start with the star. Astronomers and commentators have endlessly debated the star of Bethlehem. Was it a supernova, a comet, a triple conjunction of the planets or the memory of all three jumbled together, or something else? We don’t know. What Matthew does tell us is that some arcane astrologers recognised the birth of a child of great significance. Their stellar wisdom points to Jesus as being born as the king of the Jews. That same title which will later be hammered into the throne of Jesus, the cross at Calvary.

The magi were non-Jewish astrologers, in an ancient world where astrology was taken very seriously, where astronomy was the handmaid of astrology, and where horoscopes were widely credited. Magi were thought to have special knowledge, including medical skills. They were perceived as “wise men” and were valued by kings. At least some were magicians and cast spells. Magi inspired awe and respect. For faithful Jews and Christians, then and now, magi ranked along with necromancers, mediums, magicians card-readers and fortune-tellers, they were absolutely never to be trusted or consulted by the faithful. Yet despite this total and consistent rejection, these magi recorded by Matthew were indeed wise men. These pagan, yet wise and learned seers come from the mysterious east to worship the new-born king. All knowledge leads to the incarnation. It is later Christian imagination that has turned the magi into kings, helped by Matthew’s allusions to Psalm 72, just as allusions to Isaiah helped later convention specify that the magi used camels rather than horses, to the delight of renaissance painters.

Matthew tells us of the magis’ three gifts, gold, frankincense and myrrh, so we naturally think of three gift-bearers. More importantly, the gifts. From at least the time of St. Irenaeus in the late second century, Christian interpretation has been clear. Gold symbolising that Jesus is a king; frankincense that he is to be worshipped as God; and myrrh showing that Jesus will die. All this astrology/astonomy shows Jesus truly is born a king. Death though is not far away. Herod’s anxious enquiries amongst the wise men of Jerusalem about where Jesus was born, is motivated by the same Herod’s desire to kill baby Jesus off as a potential political rival. The myrrh will come in handy, but not yet. When Jesus does mount his throne at Calvary, reconciling heaven and earth, the myrrh will soon be needed to anoint his dead body. That reconciling throne of grace which is Calvary reveals Jesus is God, as symbolised by the frankincense, frankincense being an upmarket form of incense apparently!

As a final aside, St.Irenaeus also tells us that one magi was old with white hair, full of the wisdom of years. Another was handsome and beardless, with the enthusiasm of youth. The third magi was middle aged, a resolute man of action. Christian artists have frequently followed this age differentiation in their work, but it was not until about 1400 that they illustrated another comment of St.Irenaeus, that one magi was dark-skinned, an artistic convention that oddly developed in northern rather than southern Europe. The magi in their differences pick up the breath of humanity. These days we might expect the story to include a wise woman or two, until we realise that Mary, the Mother of God, who pondered all these things in heart, was that wise woman, the Throne of Wisdom.

Epiphany is the revelation, that baby Jesus is truly God, truly human, and will die for us.

Photograph by Fr Lawrence Lew OP of a painting by Fra Filippo Lippi and Blessed Fra Angelico in the National Gallery of Art, Washington DC.