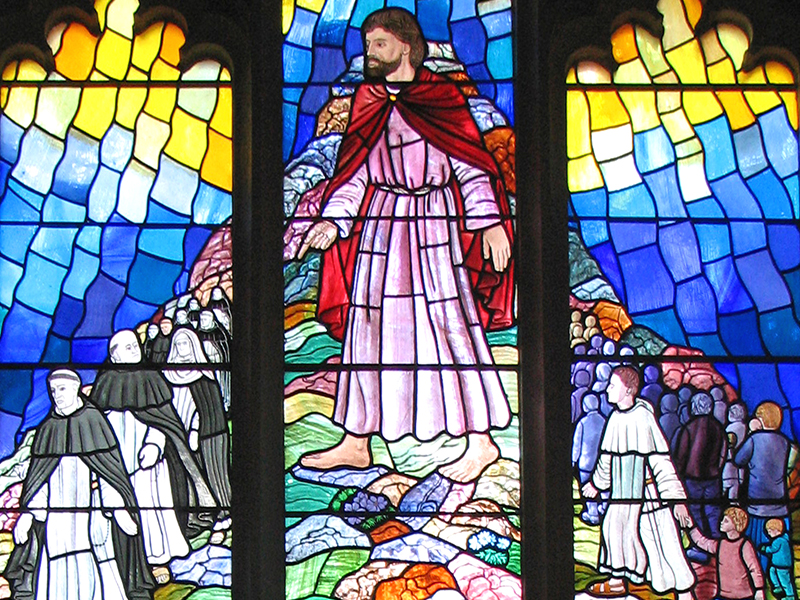 Fourteenth Sunday in Ordinary Time (C)   |  Fr Dermot Morrin ponders the significance of the seventy-disciples who are sent out on a mission by Christ.

About the Lord sending out of seventy-two others, or seventy depending on the English translation, I would want to ask who were these disciples? They just pop up and then as quickly disappear in the narrative.  They are not named. Their number, be it seventy or seventy two, is not without significance. But a more considered question is to ask what truth did Luke want us to grasp, when he, and only he, included this mission in his gospel?

But, of course, the Gospel of Luke is full of characters about whom we know very little. What seems to matter most to Luke is their encounter with Jesus.  Luke doesn’t need us to know who they were, or what happened to them next. We need not go there, because what Luke gives us is more than enough cloth.   Would anyone waste time wondering what the lost sheep did next or what the woman spent with her coin on after she found it?

The point here is that Christ did send them, and that it is the manner of his sending that is all-important.  After all, the reasonably detailed instructions are included.  In my view, the crux of the matter is that this sending is surely a sign to us of how God will achieve his purpose in our world.   And for me the clue to what this is all about is the repeated use of a single word in a repeated phrase that is often lost in translation. This Greek word can be translated as appearance or countenance or just simply face. When Luke says that they are sent ahead of him (10.1), what he actually says is that they were sent before the face of him.  He says this also a few verses earlier of the messengers who were sent to a Samaritan village to make preparations for him (9.52).  This follows directly on Luke telling us that Jesus “resolutely took the road for Jerusalem” (9.51), but again, what he actually says is that Jesus set his face to go to Jerusalem.  Moreover, Luke goes on to say that the ones who were sent as messengers to the Samaritan village were not received precisely because the Lord had set his face to go to toward Jerusalem.

The seventy-two (or seventy) are also sent before the face of him and they are told to be ready for rejection. It does not seem unreasonable to conclude that the rejection they encounter will be based on the fact that they go before the face of one who has set his face to go to Jerusalem.

What is it for Jesus to set his face to go to Jerusalem? What is it to be sent before his face?  These are the questions which their sending opens before us.   We ponder his face. It is the face of the one of whom Isaiah spoke, the one despised and rejected, “a man of sorrows, acquainted with grief, and as one from whom men hide their faces, and we esteemed him not” (Is 53.3).  Is Luke is telling us that when the meaning of what it is to set his face to go to Jerusalem is unpacked and its implications are weighed up, it is to be expected that many will turn away?

We make much of their being told to take very little with them. Down the ages Christians have heard in these lines a call to evangelical poverty.  But something more than voluntary poverty is in view here.  Those who are sent must take nothing for the journey, because somehow even basic items like a purse or a change of clothes will only serve to impede their progress. And there is an urgency about their mission as in harvest, when the may be only hours or day to save the crop. They must be single-minded and whole-heartedly dedicated to their task.  The last line before they are sent is the saying “No one who puts his hand to the plough and looks back is fit for the Kingdom of God (9.62).”

But taking nothing with them, they enter towns and villages, where they are the strangers.  They can neither defend themselves or feed themselves.  They have nowhere to lay their heads. Their vulnerability would be obvious to anyone they might encounter.  But it is in this vulnerability that they do indeed go before the face of him.  This is the ground from which they invite a response, their feet covered with the dust that will one day be mingled with his blood. Where they find a welcome, it is his peace, the peace won by the shedding of his blood, that they bestow.

But, perhaps, for these seventy two (or seventy) what the sending was really about only becomes clear on their return.  We learn that they are full of joy because of the power over evil that he has given them.  This is quite understandable but it is not the mark of a true disciple.  It is not where the true disciple must find joy.  Their joy is to be found not in what they have done in his name, nor in their own names,  but in the fact their names are written in heaven (10.20). What their sending was about is surely what the sender is always about, his saving love for all of our wayward world.

Categories:
14th Sunday of the Year