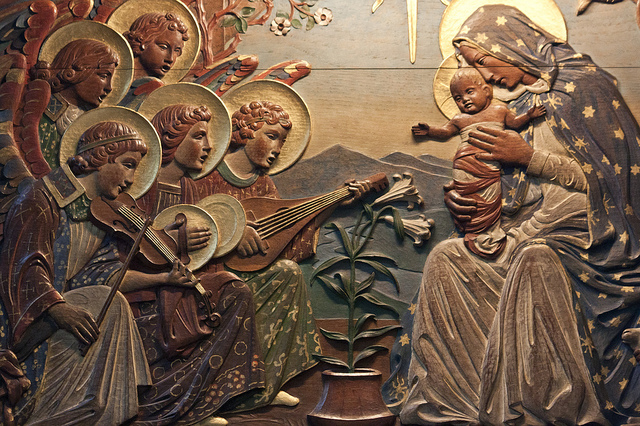 Fear of the Dark

Solemnity of the Nativity of the Lord (Christmas). Fr Euan Marley shows how the emotions of fear and hope relate us to the coming of Jesus Christ.

When people say they are afraid of the dark, it is not strictly speaking, the darkness that they fear. It is what might be in the dark that is frightening. Our world is a brighter world than the ancient one, but still there is darkness from time to time, and who knows what lurks in that darkness?

There is a darkness that never goes away, in which we cannot help believing there is danger. That darkness, is the darkness of the future. It arouses hope and fear, ‘met in thee tonight’ as the carol says. Fear is an emotion which relates us to the future. It has a function. It helps us to be cautious, to avoid unnecessary harm. Yet human emotions can take on a life of their own. Fear can populate the darkness with so many imaginary evils that we are unable to move. Hope, as an emotion and the opposite of fear, can deceive as well.

In tonight’s Gospel, for the second time, after the vigil mass, an angel tells someone not to fear.

Angels do not fear. They live in a world of light and nothing is hidden from them. The bad angels wrap themselves in darkness but they cannot hide from the truth. The good angels are filled with light. So it is natural for angels to tell us not to fear.

The angel appears to the shepherds, ‘guarding the guard of the night,’ to translate literally. They fulfil the prophecy of Isaiah, that ‘the people who lived in darkness has seen a great light.’ The shepherds are in a literal darkness, and they have reason to fear. Yet before we meet the shepherds, we have already met someone else who is showing signs of fear. That is the Emperor Augustus. He wishes to assess the size of his empire. It is more than a desire to bask in the power and wealth of the empire, or a desire for better organization in the imperium that would lead him to do this.

Whatever the historical basis of this census, there is a theological message behind this story. Luke is surely thinking of the census which King David made of his people which was a sin in God’s eyes. We are not told why he wishes to do this but Joab his general seems to understand when he demurs.

‘May the LORD your God increase the number of the people a hundredfold, while the eyes of my lord the king can still see it!’ (2 Samuel 24:3). David too shows his real motivation when he is offered a choice of punishments. David says, ‘let us fall into the hand of the LORD, for his mercy is great; but let me not fall into human hands. (2 Samuel 24:14). David wishes to count his people because he is afraid, and so was Augustus.

The empire was very much greater than the little field that the shepherds guarded but in the end that is exactly what the empire was. It was just a very big field. When we cling to our field, and its possessions we make ourselves afraid. The great are often more afraid than the little ones. Great power seems to generate great fear. The great tyrants of history commit atrocities, because they are afraid. They see conspiracies everywhere, even in their own families, and often enough, not only do they not succeed in defending themselves, but their actions bring about their own downfall.

The shepherds may have felt afraid and powerless but in truth, they had more courage than any king. No angel appeared to Augustus that night, but the shepherds were shown the truth of things. We are surrounded by a world of light, greater than any darkness. We cannot see it but we are promised light in our hearts. The powers of this world are nothing compared to the great host which sings wonderful songs of praise to God for all time. They are an army which does not offer battle to enemies, but offers peace to all human beings who can receive their message of peace. Those who may hear this message are the people of good will.

Torch now reaches readers from all around the world, in dozens of countries from Nigeria to New Zealand.

These homilies offer food for thought to thousands of men and women every week. Torch even helps many clergy with ideas for their own preaching – including some for whom English is not their native language, but who must preach using it.

Torch is provided free of charge, but as mendicant friars we rely on the generosity of others in order to continue our mission.

All the friars who write for Torch give freely of their time, but they still need feeding, clothing and housing – not to mention an internet connection!

We welcome any gift you feel able to make, and wish you every blessing for Christmas and the New Year.