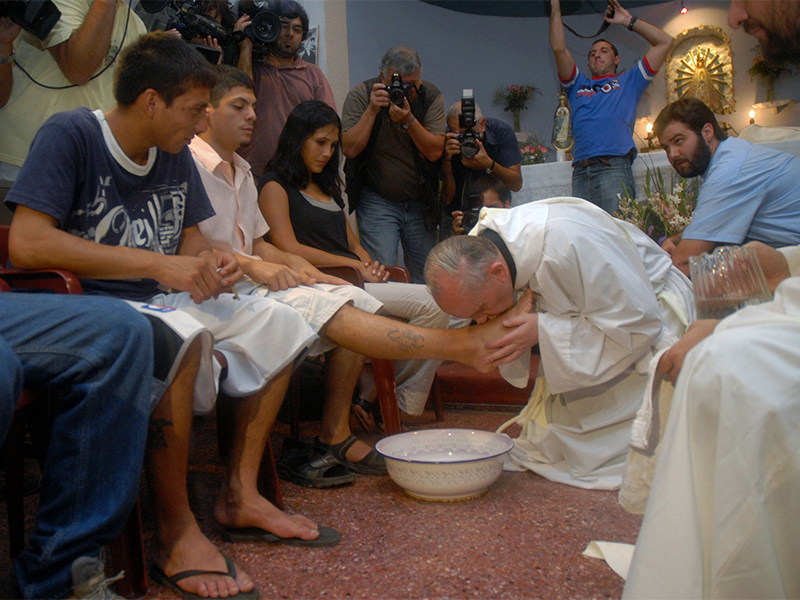 Maundy Thursday  |  Fr Dominic White reflects on the streams of grace that come from Christ’s washing of feet both in our imitation of his actions in liturgical ritual, and moreover, in our lives.

I spent a month on placement in prison chaplaincy when I was training for the priesthood. One thing that struck me about prison is the sameness of every day. Yes, there are changes in timetable at the weekends (in reality, that often means the prisoners are longer in their cells), but other than that it’s isolation from the change and variety of the outside world. For good reasons, of course.

But a few years ago in a prison in Rome something extraordinary happened, when Pope Francis came and celebrated the Maundy Thursday Mass, and washed the feet of twelve prisoners, among them a Muslim woman. He brought not just a bit of variety from the outside world, but a complete overturning of the social norms of criminal and innocent, insider and outsider, and indeed conformity and rebellion. The Pope showed a creativity borne of a profound understanding of the deep meaning of the Maundy Thursday ritual of the washing of the feet.

You see, sometimes we can feel prisoners of the sameness of our parish liturgies. Why not replace them with something different, experiment a bit? The trouble is that people have different tastes, and you can guarantee that if we try something new, half the congregation will feel that a minority have imposed their agenda. Which is why we have things called liturgical norms. Boring term, I know. But they structure the liturgy. They do not stop the creativity in its celebration which comes from a deep understanding. What Pope Francis understood is that every human being is called by God. Everyone, potentially, can become a member of God’s Chosen People. The Passover Ritual from today’s first reading is the origin of the Last Supper, the First Mass, but Jesus has opened it up so it can include everyone. And to prove the point, Jesus takes the place of the lowliest servant and washes the disciples’ feet. Not because they are worthy, but because they are dirty – dirty with the dust and muck of the road, which is a symbol of the sin which tarnishes us. Both our personal sin, and the sin of the world which has hurt us – sometimes in very concrete ways.

So Jesus tells the Twelve to copy him – to wash the feet of their brothers and sisters from the sin of the world. And we have copied him, more or less well, down the ages. As I prepare to celebrate the Liturgy of Maundy Thursday, I reflect with a sense both of profound gratitude and deep unworthiness on the trust of my brothers and sisters who will come up to have me wash their feet as God himself washed the feet of his friends. Since then clergy, successors of the apostles, have abused the bodies, souls and minds of our people. I pray that as we celebrate this ritual in brokenness, in the prison of trauma; as we celebrate a ritual so simple and so challenging, there may be an end to abuse and a beginning of healing for the countless victims, which includes those who have been so scandalised as to have left the Church.

Because this ritual comes not from mortals but from God made man, it still has the power to point to the grace of baptism, through the element of water. I wonder where that Muslim woman is whose feet Pope washed, how she reflects on that extraordinary moment of surprise. What stream of grace is coursing through her, maybe in the depths of her unconscious, to emerge at we know not what point in her life? Let’s pray for her, and who knows how many like her – maybe even others who didn’t have their feet washed but were there, prisoners confronted with the law of freedom, the law of love? Perhaps at some unlikely moment they will seek baptism into Christ.

For those who will receive the gift of faith by the inscrutable grace of the Holy Spirit, baptism is their cleansing from the original sin of the world, a washing from personal sin, and the gateway to Communion. Because on Maundy Thursday we also celebrate the Last Supper, the first Mass. Jesus takes the old ritual of the Passover and makes of it something extraordinarily new. He transforms bread and wine into his Body and Blood, so that we may eat and drink it, becoming part of Christ, part of his sacrifice. To this day the Sacrifice of the Mass incorporates us into Christ’s Cross and Resurrection, his dying for us to all that is false and evil and ugly and rising to all that is true and good and beautiful. A Communion that, when by God’s grace we fully realise it in our lives, is just that – a communion, a being one with God which is beyond giving and receiving. Our selves, our relationships, our Church, being made divine. In spite of everything.