Fifth Sunday of Lent. Fr Timothy Calvert shows us how Jesus sees the woman caught in adultery from the silence of His mercy.

When the disciples were caught in the middle of a sudden storm they cried to the sleeping Jesus to save them, and he awoke and sent the tempest to sleep, calming the waves and the wind. Who is this, they questioned themselves, that even the force of nature obeys him?

It is one thing to calm nature. It is another thing altogether to calm the sense of moral outrage that can seize a mob. Jesus in the Gospel is suddenly confronted with the outrage of the scribes and the Pharisees who bring a woman caught in the act of adultery before him. She is exposed and has nowhere to hide from her sin and shame

It is very hard not to be swept up into moral outrage when the storm breaks. Jesus is being put on the spot. If he tries to resist he is failing to keep the Law. If he goes along with them they have taken control of his ministry, and from now on he is a footnote in their story of who fulfils the role of the true Israel.

Storms of indignation and moral fury have usually very little to do with morality of course, but they do give some welcome distraction from own frailty, all that is sham and show in us. We may not have lives which outwardly fail as those of the transgressors we read about in our newspapers, but which of us could bear to have every dark thought, and temptation, each selfish motive and evil inclination opened up to public scrutiny. If you O Lord should mark our guilt, O Lord who would survive?

Jesus is not swept up in their phony outrage. They are using this woman as a test case to control him. He does not play their game, as he will evade every attempt throughout history to use him for political and ideological purposes. He is Lord, and he stands apart from our scheming. Neither does Jesus fight their fire with fire. It would be easy to become angry faced with such brazen manipulation, to shout and scream.

Jesus however fights fire with silence. He sits, and writes in the ground. We have no idea what he writes, but it makes a break between the gale of fury and the stormy response they hope to provoke. Jesus is silent, and does not reflect the violence that demands easy answers.

Sometimes there is no easy answer. To resort to a quick fire solution is to miss both the complexity of the situation, but also to miss my own culpability. I may not be guilty of this notorious sin I read about with such indignation: but my being a sinner distorts my view and lessens my ability to see clearly. Happy the person who knows they are a sinner!

From the silence of his heart Jesus speaks to the crowd. “Let him who is without sin be the first to cast the stone.” Starting with the eldest they turn away – first those who have had longer to break the precepts of the Law, but in the end including every member of the crowd leaving Jesus and the woman together.

He does not evade the reality of her sin. She is not told she is a victim. Jesus does not use passive verbs about her situation, the usual failing of those who stand against the indignation of the crowd – she did not find herself in adultery, neither did she develop a problem with sin. Standing before Jesus she is a moral agent, who can go and sin no more. Jesus gives her her life back, as he gives each one of us freedom to respond to his grace in the midst of the situations and struggles we live through.

So Jesus passes through the crowd. He does not fall into outrage, the escape clause of every sinner who wants to put sin to death in other people, but remain themselves out of sight. Jesus has no sin, so he can look at sin as it really is, he can be close to sinners. But neither does he fight fire with fire – he does not evade the reality of sin or deny the real force and power of evil.

From his silence, Jesus passes through the false choice the crowd presents him with. Lent is an invitation for us to grow in this silence in the heart of Jesus. To not rush to condemnation, to not reach for easy answers or to excuse ourselves from responsibility. The Lord is looking at each one of use as we are, undistorted by the outrage of the crowd, and he invites each one of us to go on our way, and to sin no more. 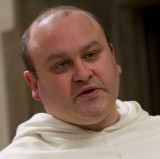