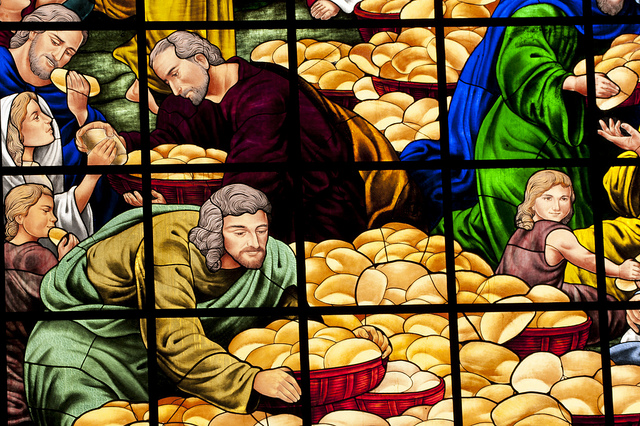 Seventeenth Sunday of the Year. Fr Sam Burke considers how we can imitate Christ and the Apostles at the Feeding of the 5,000.

The Feeding of the 5000 is the only miracle reported by all four evangelists, and each of them have their own take. Luke, for example, provides the location of the event as being at Bethsaida. Whilst Matthew, for his part, relays the interesting detail about the miracle taking place in the context of the tragic news of John the Baptist’s beheading. Mark, typically enough, gives us the bare bones. Whereas John’s Gospel — the account that we read this Sunday — contains several other details not mentioned in the other accounts.

What are we to make of the same basic story being told in different ways? It’s a matter of perspective, I think. Difference need not amount to what an erstwhile lawyer like me might call “inconsistency”. Rather, difference in this case is merely the kind of variance which characterises all human descriptions — unless those descriptions are influenced or “contaminated” by other accounts. People, often subconsciously, tend to alter or harmonise their story to fit or blend with the others. Counter-intuitively, then, variance can be taken as indicative of truthfulness, and properly considered should serve not to worry us but rather to delight us.

We’re told that Jesus has now left Capernaum and crossed over the other side of the Sea of Galilee to the shore of the new town of Tiberias. The crowds duly follow, impressed by the miraculous cures of the sick. Yet Jesus had a more ordinary concern on his mind. He was worried about the crowds’ need to eat. And so he asks Philip where they could buy some bread to feed the people. John explains that Jesus asked Philip to test him. Jesus knew what he was going to do. But does Philip?

Apparently not: Philip can’t see how such a vast number would be fed even if they had ample funds. I think most of us would have answered in similar terms were we in Philip’s shoes. I’d wager even an experienced caterer would be hard-pressed to spontaneously feed so vast a hungry crowd. Yet, the test is really a lesson. We learn from our mistakes. Three dimensions strike me, and apply to each of us, as much as poor Philip.

First, Jesus gave thanks before he distributes the food. This is profoundly eucharistic. Jesus gave thanks to God the Father thus showing what he says over and over in John’s Gospel, that he is sent by and doing the will of the Father. Where do we put the credit for our own cooking, or our work more generally? Perhaps there’s a lesson here for us to remember to give thanks to God before and after meals? For if Jesus can thank Father at a large picnic of fish and bread, surely we can do the same with the meals that we enjoy in various settings?

Second, the crowd took as much as they wanted. They had their fill and there were leftovers besides. Just as God had spoken through Elisha and done in the first reading, Jesus provided more than what was needed. There is, in other words, a superabundance to God’s gratuity. He opens wide his hand. God’s love is not reducible to necessity or sufficiency but is maximal and lavish. Do we recall God’s abundant blessings in our own life? Are we so lavish in our generosity to others?

Third, notice how the fragments were gathered. Nothing is to be wasted. This doesn’t just serve to emphasise the point of superabundance, or help the people to realise that what was happening was not a figment of their imagination although the instruction undoubtedly served to do both of those things. It was also to provide them with a message, which lies in the twelve baskets: the gathering of the twelve tribes of Israel – the Jews, and also the work of the Apostles which was to come – to proclaim the Gospel to the whole world. St. Thomas Aquinas comments that each of the Twelve had a basket, which was understood as an instrument of the peasant, of the lowly. Hence, “although they are looked down upon in this present life, they are nevertheless filled with the riches of spiritual sacraments…. to preach the faith of the Holy Trinity to the four parts of the world.”

When we come to Mass, in a similar way to the apostles on the grassy hillside, we are satisfied and fill our baskets with the abundant riches of Christ’s one body. We receive the immeasurable grace to go out and preach the Good News of repentance and salvation so as to be united — in the words of St. Paul — in one and the same hope: one Lord, one faith, one baptism, one God.

Categories:
17th Sunday of the Year