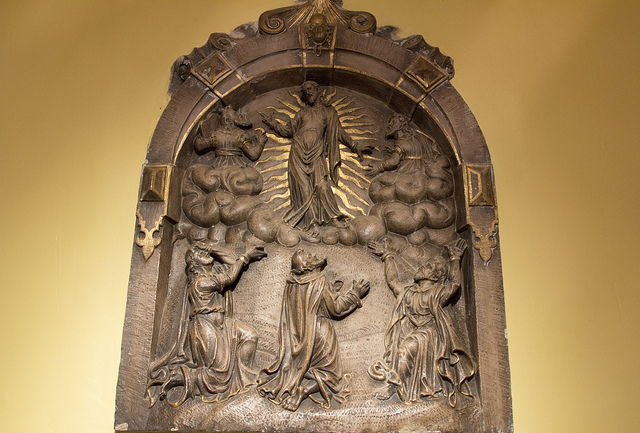 Second Sunday of Lent. fr Duncan Campbell helps us to understand the transfiguration as an expereince of prayer.

Why did Jesus appear, suddenly, and so changed, to his closest followers? The gospels are meant to raise these questions. They were written, to report the strangest and most important event in human history, something quite unlike anything else we are told. That was the point of writing them.

Let’s ask the questions. Why did this happen? We might answer by saying – Jesus, their Lord and Master, was to be condemned as a blasphemer and rebel, mocked, publicly flogged, and hung, naked, to die horribly on a Roman gibbet. His followers would need some reminder of who he really was, to see them through this ordeal.

Why were they told to keep silent about their vision? Perhaps because they simply wouldn’t be believed, until much more wonderful things happened. These would make something like this scene make sense, and be believed. Jesus was to rise from a tomb, appear to many other followers, tell them to preach – invite others to believe that after death there is life with God.

There are little niggling questions, however. How did Peter know that the two strangers talking to Jesus were Moses and Elijah? We don’t know. We may be in a world nearer to God than ours, with more knowledge of God, and God’s affairs, than we now have.

Jesus was the divine being Peter had already recognised. Moses brought the Law – the way to live with God. He never was seen to die. Elijah, the greatest of the Prophets – ‘spokesmen’ for God – didn’t die. He was spectacularly ‘assumed’ out of this world. All this could have helped Peter to know who they must be. I shouldn’t fumble with a mystery, but I could suggest that there might have been hints in their appearance.

We for example have the idea, from somewhere, that Peter had curly hair, and Paul was bald. We might recognise them when we meet them in heaven.

What did Peter mean by suggesting they make three booths? It was the custom to camp out in booths, to keep guard, over the harvest. Peter wanted these wonderful beings to stay, and keep guard over us, for ever. It was not to be. ‘He didn’t know what he was saying’.

A Voice – we might think of them all as being ‘within earshot’ of God – called Jesus the ‘chosen one’. In Hebrew, the words ‘chosen one’, ‘beloved’, sound – David, the author of the Psalms.

Jesus wasn’t just the ‘traveller’ they might have become very familiar with – a tramp, always on the road, sleeping rough, leaving his friends so hungry at times to plucking grains of corn. Worst of all, he faced formidable opposition from the authorities. He was presented in this wonderful scene, a majestic one – Law, Psalms, Prophet.

The point, for us all, was that Jesus was praying. We too can pray, especially with the help of the Law, the Psalms and the Prophets. When we pray – to God – a light must shine in the world of the spirit, and we are transfigured ourselves, and in such majestic company.

Whenever we think of God a flash of recognition must reach us from God – and God from us. I hope we have all had some glimpse of this when we pray, and ‘know what we are saying’.

We are recognised – and recognise. We are loved – and love. We are spoken to – and speak, words given to us by Jesus, Moses, and Elijah.

Jesus’ triumphed. He redeemed us. He atoned to God for us, in loving obedience. He clearly showed us this, in resurrection. We are now allowed to make the ‘booths’ Peter wanted – our parish churches, basilicas, and magnificent cathedrals, for Jesus, Moses and the Prophets.

We add the Saints. They lived with all this. They glowed, with God. Artists painted them with ‘haloes’ to suggest this.

They didn’t walk about with haloes. They looked ordinary – even Jesus. Their glory couldn’t be seen, while they lived with us. This can help us understand that the glory, in our lives with God, may not be seen by others, when we pray, and become saints ourselves.

The image above is a bas relief to be found in the Jesuit Church of the Sacred Heart in Edinburgh.

fr Duncan Campbell is a member of St Albert's Priory, Edinburgh, and is currently resident at St Mary's home, Stone.