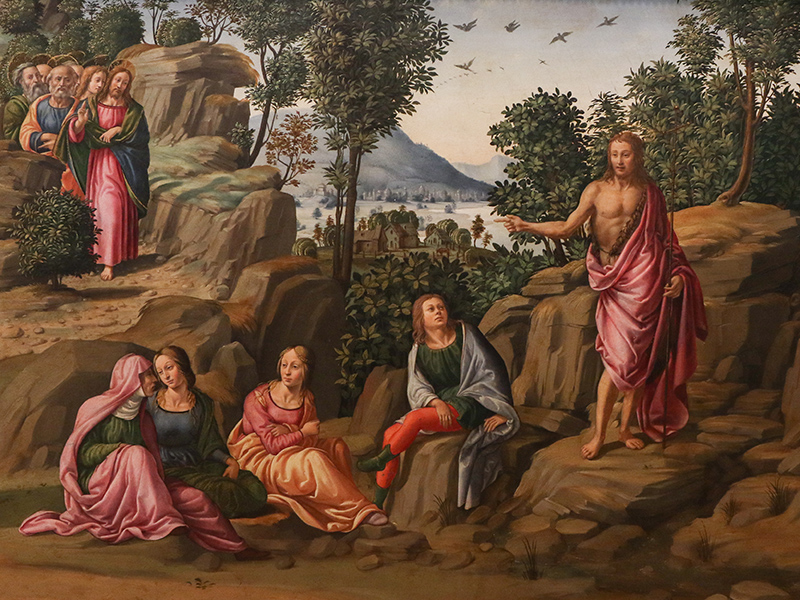 Greater than the Greatest Prophet

Third Sunday of Advent (A)  |  Fr Duncan Campbell ponders how we in our time could be considered greater than St John the Baptist.

Everyone in the world knows that Christmas is coming. That’s wonderful. Many, however, may not know very much about Christ. In the Church, we imagine ourselves not knowing, waiting for Christ.

John the Baptiser was waiting. When Jesus came to him for baptism, he recognised him as Messiah – Christ. A year or more later, however, John himself was held in prison, for speaking ‘truth to power’. He asked Jesus for confirmation. It reflects the thoughts we may be tempted to have – much of the world seems to carry on, in its own old way, not knowing Jesus.

Jesus had a lot to tell John, about curing the blind, the lame, lepers, the deaf; raising the dead to life. Jesus was ‘God among us’. He dealt with the misery he met, directly.

This doesn’t happen today; but the world – thanks to him – is very different now. There is care for the sick and disabled and elderly; and the poor are, if not much helped, are at least not left to starve and die in our streets. Those involved in this work are admired –  St Vincent de Paul, St Teresa of Calcutta, Sister Rita of Manchester. This is a greater miracle – the world-wide care, and concern; so much good, done to so many, by so many; the great respect shown; and support given.

It is striking, that the climax to Jesus’ miracles is that ‘the poor are given Good News’ – the ‘Gospels’, we know and love. His ‘Good News’ is widespread in the world today. Over two billion Christians know, love and follow Jesus; and even over a billion Muslims, who know ‘Isa’ Jesus, and ‘Maryam’ Mary, in the Koran, are urged to care for the poor.

Jesus has great things to say about John. People went, in numbers, far out to the desert to see him. They weren’t interested in the ordinary beauties of Nature that many satisfy themselves with today – ‘a reed swaying in the wind’; or in celebrities – ‘someone wearing fine clothes’. They went out to see a holy man, a prophet, a ‘spokesman’ – for God. But John was much more than other prophets. John was especially mentioned, in scripture, Jesus asserts, and quotes Prophet Malachi, who foresaw God as having to break into our world, to transform it back into what it should be; and having to send a messenger to prepare us for it. This was John.

He is, Jesus says, ‘greater than any other man there has ever been’. Certainly, he lived dramatically, in the desert, wearing rags of camel skins, eating whatever he could find there – locusts, wild honey – and plunging any who came to him, rich and poor, learned and simple, into a humiliating public bath, to cleanse them of their sins. It’s the most important thing, so much needed, in this world of ours – to see through our pride; adopt humility; and realise that we have sins, which need to be forgiven, by the God we can come to know, and love, and serve.

Then Jesus says something that I have thought about, all my life. I am not sure I fully understand it. ’The least in the Kingdom of Heaven is greater than John’! I long thought it meant that in heaven, we shall all be like angels, and full of all the knowledge and love we need, of God and His world.

It might mean more simply that John could have known nothing of Jesus’ later life – his teachings; his rescuing us from sin, in sacrificing himself on the cross; his rising to an eternal life, to share with us. The least of us knows something of this, about Jesus. But how many know it –  really?

It may mean something much more. Are we aware of all that we have been given in the Church – in Baptism, Confirmation, Penance, the Eucharist, and the other Sacraments? – The Holy Spirit, God’s Presence to us? The power to Pray – speak to God, as Our Father? The Knowledge to do God’s will? To live in ‘Grace’ – the ‘goodness of God’ Himself!

Photograph by Fr Lawrence Lew OP of a painting from the Workshop of Francesco Granacci, c.1506-7, housed in the Metropolitan Museum of Art, New York.

fr Duncan Campbell is a member of St Albert's Priory, Edinburgh, and is currently resident at St Mary's home, Stone.