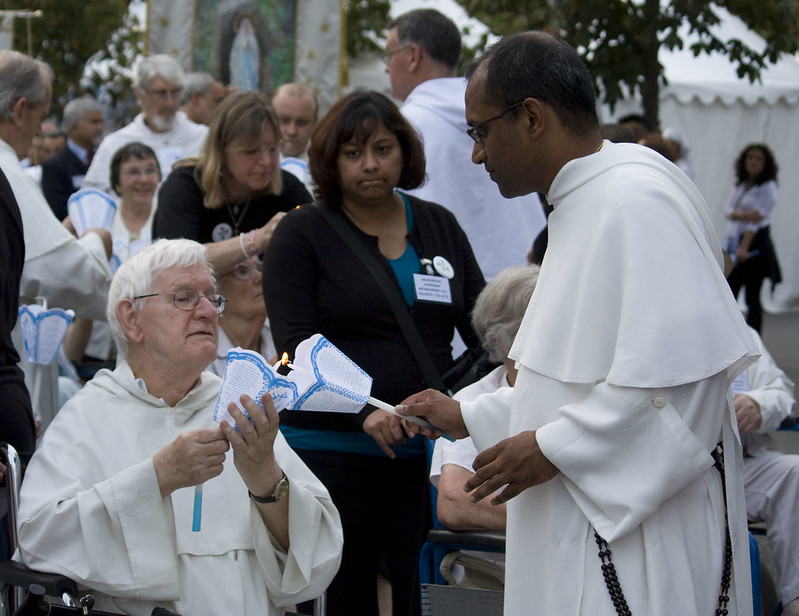 12th Sunday of the Year (A): Fr Matthew Jarvis is inspired by a new emoji.

In April, Facebook introduced a new reaction emoji: Care. It’s the smiley hugging a heart. Long gone are the days when a tragic or angry message would get the ambiguous ‘Like’ as the only non-verbal reaction: was that sympathy or Schadenfreude, we used to wonder. Facebook later introduced a limited range of alternative reactions – Love, Haha, Wow, Sad, Angry – but now we can show we Care.

As a Christian, I know that ‘God is Love’ (1 Jn 4:8,16), yet somehow Facebook’s Love emoji (just a heart) strikes me as less expressive of God than the Care emoji. There’s something about the way the Care face smiles, scrunches up its eyes, and presses the heart close to itself, that illustrates God.

This is not everyone’s idea of God. The idea that God cares for us, or indeed for anything in this world, can strike atheists as absurd, even offensive to human suffering. They cite Charles Darwin’s complaint about a nasty kind of parasitical wasp: ‘There seems to me too much misery in the world. I cannot persuade myself that a beneficent and omnipotent God would have designedly created the Ichneumonidae with the express intention of their feeding within the living bodies of caterpillars…’

Is this what God care looks like? It’s tempting to tell God to go away then.

And yet, Wittgenstein’s comment against geocentrism can make us think again. To scientifically uninformed people who insist the sun goes round the earth because it looks like it does, he asks rhetorically: what would it look like to us if the earth went round the sun? This is what it looks like! (If Wittgenstein were on Facebook I would respond: Haha. Wow. Like.) We just need the bigger picture, using some maths and science, to see that our instinct misled us.

Jesus always gives us a bigger picture, revealing God’s truth and love for us. In today’s gospel, he is teaching his closest disciples that, despite persecutions they will suffer by following in his footsteps (Mt 10:25), they must overcome their human instinct to fear. He says it three times: ‘Do not be afraid.’ We can survive any earthly suffering, even bodily torment and death. Our only fear must be ‘fear of the Lord’, a deep humility before God the Almighty Creator, not because we imagine he wants to hurt us but because in his love he has given us a terrifying opportunity freely to return or reject that love.

Our first parents rejected God’s love, though not irredeemably. Death entered the world through the original sin of Adam, St Paul teaches, and in Adam we all died (Rom 5:12): we lost our inheritance of grace, our original friendship with God. Christians, then, do not deny suffering or death – an undeniable part of our picture of the world – but we do have an account of where it came from, and how God still cares for us.

Jesus uses the image of sparrows dying or being sold two-a-penny – that looks like cruel Nature as described by Darwin. But, as Jesus tells it, ‘not one falls to the ground without your Father’ (Mt 10:29). Translations sometimes add ‘without your Father knowing’ or ‘without your Father’s will’, and either works: God knows all things, and his providential will encompasses all things. The early commentator Origen clarified that God’s direct will is not in play when the sparrow falls; God only permits death, never actively desires it.

So this is what God’s care looks like: not preventing all suffering but holding all things in being and never letting sin or death have the last word. Supremely, we see this on the cross of Christ, when Love Himself submits to death and rises triumphant, offering us the ‘abundance of grace’ (Rom 5:17). Now we can look back on Adam’s sin as a ‘happy fault which earned for us so great, so glorious a Redeemer’.

St Peter, having run away from the crucifixion, was reestablished in love by the Risen Christ, and strengthened his brethren with these words (1 Pet 5:6-7): ‘Humble yourselves therefore under the mighty hand of God, that in due time he may exalt you. Cast all your cares on him, for he cares about you.’

Categories:
12th Sunday of the Year