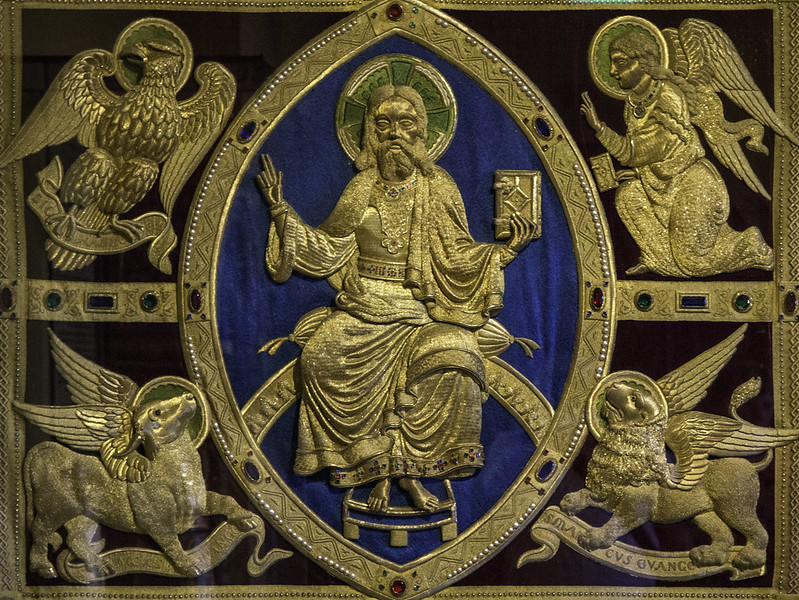 Torch
Home  /  Torch  /  Jesus, remember me when you come into your kingdom!

Jesus, remember me when you come into your kingdom!

Solemnity of Our Lord Jesus Christ, King of the Universe  |   Br Andrew Brookes OP reflects on our crucified King.

The request of the dying thief, ‘Jesus, remember me when you come into your kingdom’ is remarkable.  Jesus is enduring one of the most shameful forms of execution devised by human beings, surrounded by a hostile and mocking crowd. For sure, Jesus has a board above his head, on which is inscribed: ‘Jesus of Nazareth, King of the Jews’. But the human reality beneath it shouts out that this is not true. He is being executed by the Romans, the world’s one super power, having been found guilty of blasphemy and rejected by his own Jewish people.

Although military, politically, socially and physically Jesus is degraded and emptied of power and status, he exercises the power of Godhead, that is in fact greater than all the powers just named and any other power or force that could be named.  Jesus wages war, a kingly responsibility, intent on combatting the true enemies of humanity, the forces of sin, and Satan, and behind them, the power of death, forces that prevent us mere creatures fulfilling our God-given calling.

Light shines out in these darkest of hours, hours during which darkness literally fell on the land, for Jesus is full of truth, full of dignity, full of righteousness, and full of love. The thief is given grace to see this, to see Jesus is in charge of himself and the situation, despite all that is happening to him and around him.  Confessing his sin, he asks to be remembered when Jesus is established in his kingdom, meaning after Jesus has defeated his enemies and has been securely and triumphantly enthroned.  Jesus assures him this will happen, and they will both progress towards it by entering paradise that very day.  This is light vanquishing darkness!  Jesus is fighting, winning and establishing his kingdom, even bringing people into it, while his enemies think they are winning.  It may seem a strange way for a king to fight, but this king is equally a priest.

It is the divinity of Christ that makes decisive the priesthood and kingship exercised here by Jesus. As Paul puts it – God the Father reconciled all things to himself in and through Christ, making peace by his blood, shed on the cross. That perfect sacrifice is a decisive victory over the forces of sin and Satan. Jesus did not sin, and did not yield to the temptations of Satan: he defeated the forces of both, embracing death so as to defeat and disempower it. The nature and value of his sacrifice, the perfection of his virtue, and the reality and power of his victory are all shown in his resurrection and ascension.  He now rules on the divine throne, next to his Father, king of all that is, of the entire Universe.

Jesus’ ascension makes more manifest who he has always been: the eternal divine Son, who proceeds from the Father, and through whom the Father made everything that was made.  The journey from heaven and back to heaven in human flesh changes things for us, for the ruling glorified Son is also the created son of Mary, head and source of a transformed human race.  From Heaven, he now offers us more power – grace given us in the Holy Spirit, the sacraments and other ways – and the chance to reign with him.  We are made kings by our baptism, putting off the old body of sin, and being inserted into Christ. We are called to reign with him by bringing all our personal powers under his truth and rule, and by actively building his kingdom around us, offering participation in it to others.  We do this on a daily basis, living and dying as he did, for the earth is still a battlefield. The battle and hopefully the victory that King Jesus fought during his life on earth will play out in our lives. We can draw on his kingly power by faith, exercise it by love, and hope to share its fulness, and see our King face to face, in the future.

The Solemnity of Our Lord Jesus Christ, King of the Universe marks a fitting end to the Church’s year, since the fulness of his kingship will only be revealed at the end of time, though it will thereafter be manifest in full public glory forever, as he reigns with his Father, over the new creation.  We, living on earth, look forward from our place in time to it, but not passively. We eagerly await it, and are to pray and prepare for his coming.  So, this celebration fittingly falls as we are about to enter Advent at beginning of the next liturgical year. The glorious and powerful kingship of Christ, truly universal in scope, should permeate our minds and whole outlook all year round – that God’s kingdom may come, and Christ, the King of the Universe, be all in all.