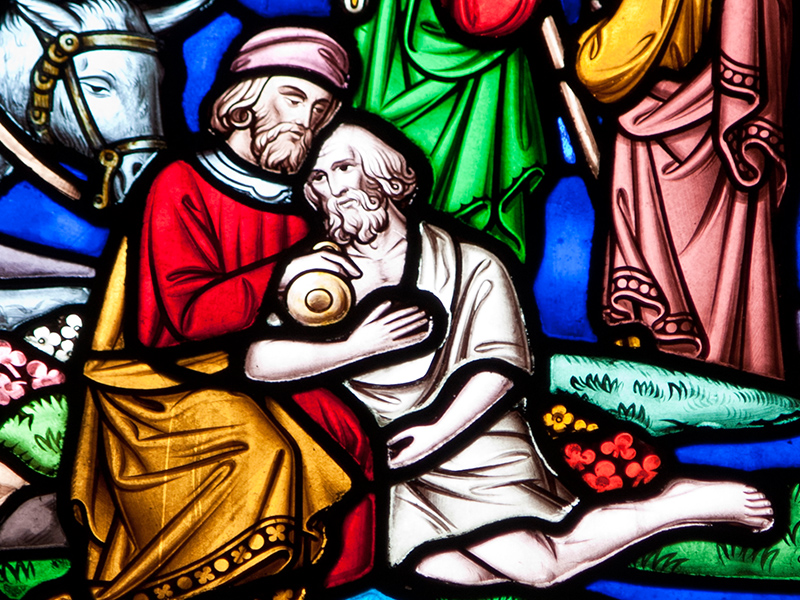 Thirty-First Sunday of Ordinary Time (B)  |  Fr David Sanders says that Jesus unites in love whatever we human beings tend to polarise.

At the end of his ministry it is not surprising that the religious authorities want to know what is the basis of Jesus’s authority. After all, in cleansing the Temple he had challenged the symbol of their authority. Jesus, like Jeremiah before him, had attacked the way God’s law had been carried out by the Jewish priests–with sacrifices and holocausts in the Temple–but ignored in the way that so many of God’s people were treated with disdain and injustice. The temple, instead of being a place of prayer for all nations, had grown inward-looking, excluding the Gentiles. These religious authorities suffered from what we might call today a polarised mind; this is the attitude in which someone is fixated on one point of view exclusive of any competing points of view.

So Jesus is attacked by the Pharisees, the Saducees, and the Herodians as they try catch him out and make him take sides on contentious issues such as the resurrection or the tax paid to Caesar. Now today it is the turn of a scribe to address Jesus. No doubt we have already pigeon-holed him and expect him to pose an aggressive question to Jesus. But, no, the scribe is fair and open-minded. He has listened to Jesus’ wise replies to the other leaders and seems genuinely interested in wanting to know how Jesus would answer what had become a familiar question among lawyers.  With 365 prohibitions and 248 positive commands in the Torah, was there a basic principle behind all this detailed legislation which could interpret it well? So he asks, “Which is the first of all the commandments?’”

Jesus answers by quoting the Shema which we read in the first reading from Deuteronomy. “You must love the Lord your God with all your heart, with all your soul, with all your mind and with all your strength.” Love of God comes first but it is not enough. No doubt aware of our human tendency to polarise, to separate the divine from the human, the earthly from the heavenly, Jesus quickly adds another command taken from Leviticus 19. “You must love your neighbour as yourself.” These two together are the key to true interpretation. These two commandments existed separately in Judaism. It is apt that Jesus, who unites both the human and the divine in himself, should bring the two together.

But is all this legal discussion too abstract? We sense in Luke’s Gospel that love of neighbour must be spelt out in concrete terms. Jesus makes it clear there that the neighbour includes the hated Samaritan. It is he who proves himself a neighbour by acting and not being exclusive in his love.

But Jesus does not expect theory without practice. Throughout his ministry he has shown what the love of God means, and as he goes to Gethsemane and Calvary he will show what the love God and doing his will means. He will accept the cup which the Father gives him.  But that sacrifice is also an expression of his love for neighbour for he gives his life “as a ransom for many.” The Incarnational Son shows in practice what it means to love God and neighbour at the same time.

So how is Jesus’ teaching received? The scribe does not immediately debate aggressively with Jesus as so many of the other religious leaders had done. He can acknowledge the truth in what Jesus says and recognise that the one universal God they worship has no place for exclusion and separation. And he also picks up the prophetic criticism Jesus had made of the Temple which did not recognise that loving God with all one’s strength and one’s neighbour as oneself is far more important than holocaust and sacrifice.

The Church is always in danger of being riven by polarising tendencies where groups are fixated on one idea and will not give room or listen to others’ views. We need to see how Jesus brings together rather than separates; makes love of neighbour closely linked to love of God. And then, we can admire, too, the scribe of today’s Gospel. He was not imprisoned with his own rigid views but was willing to listen carefully to and approve what Jesus said. Even a scribe could change and enter the Kingdom of heaven. What Jesus said to us of the Good Samaritan could also be said of the sympathetic scribe: “Go and do likewise.”

Categories:
31st Sunday of the Year