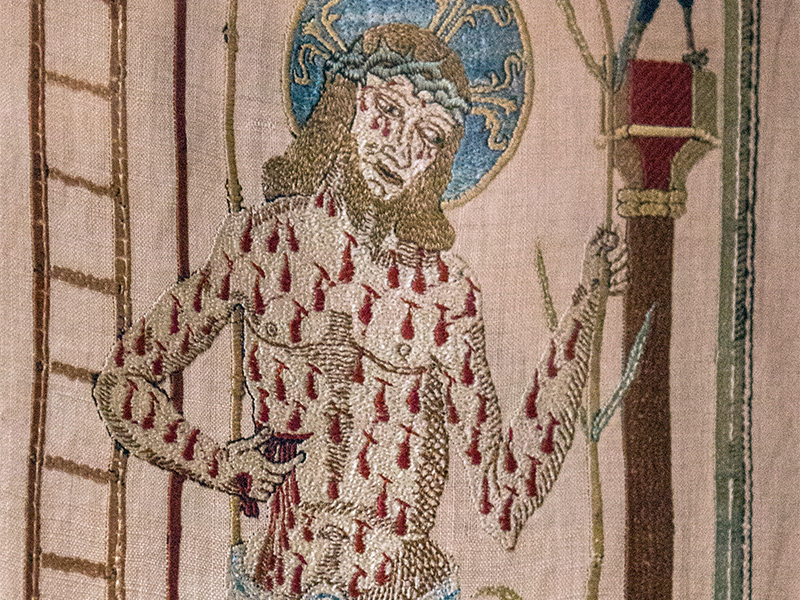 Fifth Sunday of Lent (B)  |  Fr John Patrick Kenrick points to how we, like Jesus himself, have to “learn to obey through suffering”.

Today’s Gospel sets the scene for the forthcoming drama of Holy Week.  Jesus is, in effect, telling his disciples both that his work of preaching is over and also – something difficult to grasp – that a final cosmic battle with Satan is about to begin.  This battle will involve his death, but that death will be unimaginably fruitful in defeating evil and granting his followers access to eternal life.

What prompts this dramatic declaration is something fairly mundane, the significance of which only Jesus understands.  Some Greeks arrive and want to see Jesus.  He appears to show no interest in them.  These are not Greek-speaking Jews but gentile Greeks.  A meeting with them would surely be an opportunity for Jesus to expand his ministry.   But he shows no interest.  Philip and Andrew must have been perplexed by His reaction.

The arrival of these Greeks is the sign that Jesus has been waiting for – His message is beginning to spread to gentile lands. Paradoxically this means that His earthly ministry must now end – just as it is beginning to show promising signs of growth. Even so, here are potential converts – so why does Jesus ignore them?

It is easy for us to forget that Jesus’ immediate ministry was primarily directed to his own people, the Jews.  There is a very good reason for this.  They are His people and God’s chosen people.  It is from them that He has been born and this is part of a divine plan which has been unfolding over the centuries, a plan in which the descendants of Israel are called to a two-fold witness – to witness in their faith to the one true God and in their manner of living, to be examples of fidelity to God’s commandments.  Like all human beings, the chosen people did not always live up to their calling to be a holy people.  But their very failings served only to highlight God’s love for them and His infinite mercy.  The prophet Jeremiah reminds us of this mercy and he foretells a new era when God will recreate His chosen people by planting His law in their hearts.

It is Jesus who ushers in this new era.  He is both a son of David and the Son of God.  In Him a human will has so fully embraced God’s law that it is a perfect expression of the Father’s own will.  His first priority, then, is to perfect his own people by living among them and acting as a channel of the Father’s love for them.  He will sacrifice everything to show them how to respond to the God who is our Father.  If Jesus recognizes the privileged place of his own people in the divine plan, he also knows that there is a place in that divine plan for the rest of humanity too.   As He tells us in this Gospel passage, by being ‘lifted up from the earth’, in other words by dying on the cross, he will draw everyone, Jew and gentile, to himself.  And so after his resurrection He will send out his disciples to accomplish the second stage of His mission, which will be to the whole of the gentile world.

There is a hard pill to swallow in this Gospel because being drawn to Christ will involve ‘hating our life in this world’.  To serve Jesus means to follow Him says the evangelist; and to follow Him means to follow Him to the cross, because that is where He is now heading.  The letter to the Hebrews offers us this further reflection on the human condition: that we all learn to obey God through suffering.  Jesus himself in his passion and death demonstrates the need for ‘suffering as a way to obedience’.

Most of us are careful to avoid anything that might involve difficulty or suffering.  We are tempted to surround ourselves with comforts, says Blessed John Henry Newman, but these comforts corrupt our hearts and seduce us from God.  It’s just part of wanting to have things our own way and to be the centre of the world.

Yet, when we think about it, suffering is an ever present and important part of growing as a human being.  The transformation from child to mature adult is no easy achievement.  So it should not surprise us that suffering and sacrifice are also the way to grow in holiness.  The main thing is not to fear sacrifice and to be willing to begin here and now to embrace the will of God in every moment of our lives.

‘Easier said than done’ you may say – and you would be right.  But then it’s not all down to us.  It is the grace of Christ working within us which will refashion our will and transform our rebellious human spirit into loving and regular obedience.  We only have to keep asking for that grace.

Photograph by Fr Lawrence Lew OP of the medieval ‘Fetternear Banner’ housed in the National Museum of Scotland.