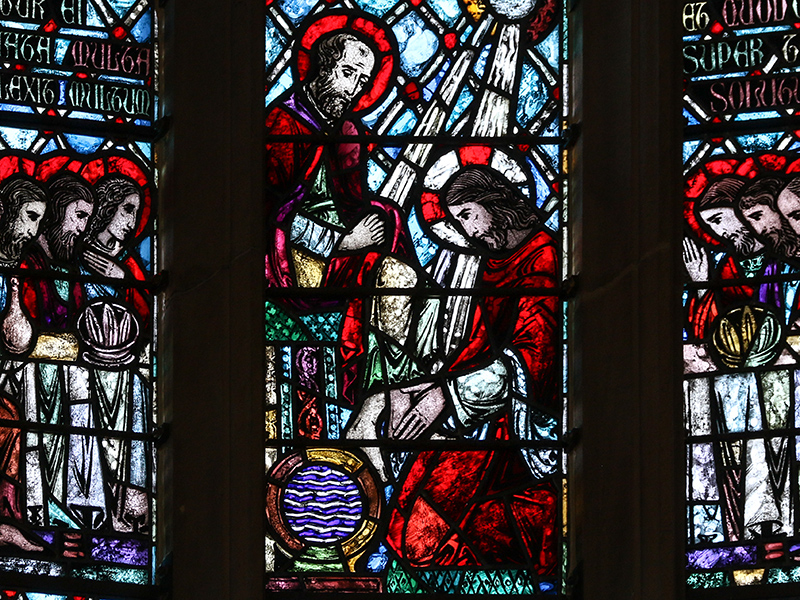 There is a weir on the river near where I grew up. There was a stone on which you could sit under the shade of a tree and cool your feet in the river water in on a hot day. As a child I didn’t know how significant water had already been in my life.  It was with water that I had been baptised. We children did not yet know how the river that flowed over feet would be such an important symbol for the flow of our lives, a flow which took each person in a different direction and yet to the same place in the end.

The ritual of foot washing takes me back to that flow of cool river water rushing over my over my feet and making them clean.  Of course, this year the ritual of foot washing is to be omitted and yet we must plumb still its profound meaning. We must look for signs of our baptism in other actions and other places.  We must come by a less familiar path to the remembering of what he has done for us.

Each gospel gives the account of Jesus sharing his final meal with his disciples, but St John’s account is quite different.  He does not tell us about the preparation for the meal or the location, beyond the fact that it must have been in Jerusalem.  Nor does he tell us exactly when it took place, but the flow of the narrative tells us that it was on the night when he was betrayed.  It is so closely connected with the events of the passion that it becomes a kind of prelude to everything that will unfold before us.

The week began with another meal, at Bethany in the home of Jesus’ friends: Mary, Martha and Lazarus. At some point during that meal Mary anointed the feet of Jesus and the house was “filled with the fragrance of the ointment” (12:3).  Jesus has always been the guest at meals in the gospels, but now he is the host and, as the host, he washes the feet of his disciples.  Foot washing was to be expected, but done by a servant or a slave as the guests arrived.  Jesus waits until they are all sat at table.  It takes place in silence until Peter speaks.

St John tells us that Jesus loved his disciples.  Moreover, they are described as “his own” (13:1).  St John also says that Jesus loved them “to the end” (13:1).   This can mean to the full, as in the jars filled to the brim with wine at that other feast at Cana.  Or, it could have the sense of completion,  as when after a journey you finally reach your destination. The very word that can mean limit implies that this love is without limit.  It can also mean until his death.  It can mean all of these and does. It is the prelude to what he will accomplish on the cross.

A slave washes feet. But Jesus doesn’t do this act as would a slave. He does it in freedom and from a position of strength.  St John tells us that he removed his outer garment, washed their feet and then put his garment back on again.  What he actually says is that Jesus laid down his garment and afterwards took it up again.  This is how he refers to the laying down and taking up of his life, and to the good shepherd who lays down his life for his sheep.  Shepherd and foot washer are one.

So what are we to do this year?   If not in Church, where will the washing of feet take place this year?   I would suggest that it is well under way, in homes between family members, and in the spaces between homes where groceries are left on door steps, on the internet where people support and sustain each other. It can be found in hospitals and in care homes, in the staff and, I think, also in the patients.  This unnamed but very real foot washing is indeed very advanced and widespread.  You will see it in supermarkets and in city parks where people keep their distance, not primarily out of fear of contagion, but out of the proper exercise of love.   “I have given you an example, that you also should do as I have done to you (13:15)”.
On this holy night, the absence of foot washing, reminds me of how the cool waters of my baptism are become the stream of his life in me, and of how I so need to rest in the flow of his life, of his love and his grace.  I need to have part in him.