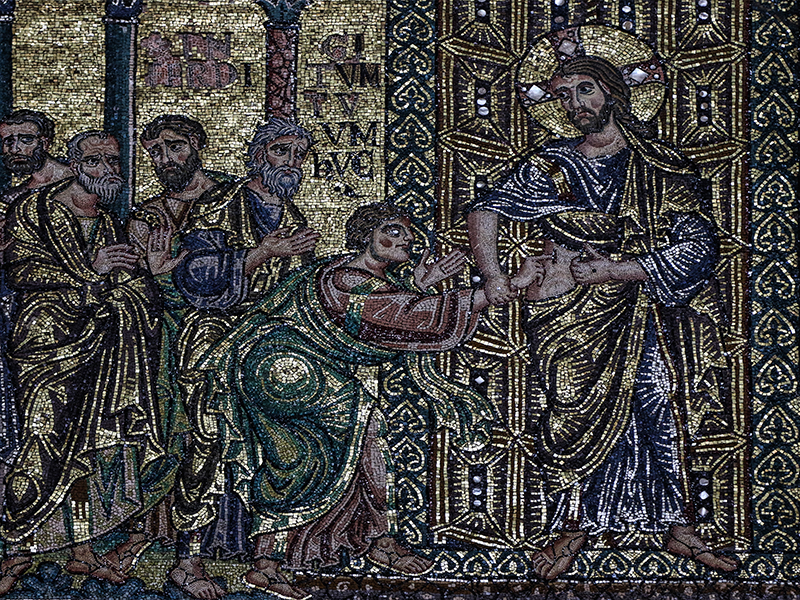 Moulded in His Image

Second Sunday of Easter (A)  |  Fr Richard Ounsworth says that by living lives of mercy we come anew every day to the Easter faith that St John’s Gospel calls us to accept.

Next time you’re in the vicinity of the British Library (it’s near Kings Cross station), pop in and have a look at one of the books on display in the ‘Treasures’ section, which is open to the public. The book I am referring to is a Fourth Century Christian Bible known as ‘Codex Sinaiticus’, and along with another called ‘Codex Vaticanus’ it is the oldest Bible in the world. If it happens to be open at the right page, the page containing today’s reading from the end of Chapter 20 of St John’s Gospel, you will be able to say that an ancient scribe made a correction to what the original scribe wrote in the last verse of the chapter. The addition is a single letter, a sigma, that could possibly change the meaning not just of the verse but of the whole Gospel.

You see, without the sigma, the most obvious way of understanding the verse would be ‘…that you may keep on believing that Jesus is the Christ…’; with the sigma, it would rather be ‘that you may come to believe …’. So was the Gospel written for Christians, to strengthen their faith? Or was it for potential converts, to bring them to faith? Is it written for us, who received our faith at baptism as many thousands of people across the world might have done at the Easter Vigil? Or is it not really directed to us at all.

Well of course even if we have been Christian for decades, we all find that very often our faith is a tender flower, a wavering flame. Even if St John did write his Gospel for unbelievers, we too need to come to faith anew every day, to allow the Word of God to resurrect our faith once more. We are all frequently in the same situation as those early Christians who were perhaps converted by their first encounter with St John’s Gospel, and we are frequently in the same situation as St Thomas was in that upper room. We doubt, we long for a deeper, firmer, more convincing encounter with the Risen Christ to give us that conviction that we lack. Jesus, in his infinite compassion, gave Thomas what he sought, and he will not deny it to us either, though it may come in a slightly different way.

For St Thomas, this encounter is an astonishingly physical one. He is invited to put his fingers, his whole hand, into the holes that forever mark out the risen and glorified body of Christ as the crucified one. The word for ‘hole’ or ‘mark’ is ‘tupos’, which is a mould, an imprint or permanent impression that in turn is able to mould other things that are pushed into it. So – perhaps only on an unconscious level – St Thomas is asking, and being permitted (nay, commanded) to be moulded to the image of Christ, conformed to the crucified. It is so important, too, for us to recognise that these marks remain, to be reminded that the resurrection does not wipe away the crucifixion but completes it, as Christ has not come back unharmed to this life, but rather has gone forward, indelibly marked with the signs of his self-giving love, into the new kind of life that began with his resurrection.

So Thomas is being invited into that life, a life that is absolutely characterised by the love that led Jesus to his death. This is the greatest love of all, the love of one who lays down his life for his friends, the love that will lead Thomas to make that same sacrifice in the fulness of time, and the love that invites you and me to make that sacrifice too: to be vulnerable, to risk all, to give everything and not to count the cost. This is what we mean when we say that we must be merciful as God our heavenly Father is merciful.

And it is by living out that merciful, vulnerable self-giving love that even in this life we already begin to enjoy the life of the resurrection, as we build up that trusting relationship with Christ that we call faith. It is because we trust Jesus when he tells us that love is stronger than death, that we are able to dare to live lives of mercy. And it is by living lives of mercy that we come anew every day to the Easter faith that St John’s Gospel calls us to accept.

So today we put our fingers into the marks of the crucifixion, inviting Jesus to mould us, to conform our hearts and our lives to his merciful life and his sacrificial death. Today we place our hands into the side of Jesus to be washed clean by the water and the blood. Today, as we embrace our risen Lord with Thomas, not seeing him in his human form but recognising him in the breaking of bread, Jesus breathes upon us also his Holy Spirit, the Spirit of mercy and love, the Spirit of courage and power, the Spirit which makes us truly alive with the new Easter life of the Cruficied and Risen Lord.

Photograph by Fr Lawrence Lew OP of a 12th-century mosaic in the Basilica of the Nativity in Bethlehem.