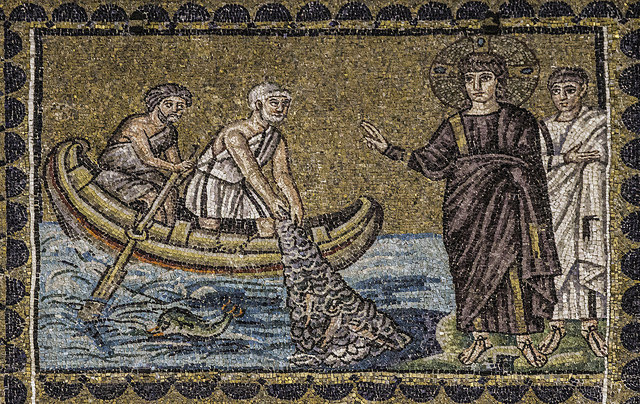 The words that St. Luke records a kneeling Simon Peter as addressing to Jesus—“leave me alone”—don’t seem like an auspicious start for the one chosen to be leader among the apostles. But, as our first reading from the Prophet Isaiah reminds us, reluctance on the part of those chosen to be missionary prophets of the Lord is not a new thing (and the vocation stories of more than one Dominican suggest that it’s not limited to biblical times either). Within seconds, though, Simon is on his feet and has abandoned everything to follow Christ. What has happened?

The short answer is that Simon has met Christ. This is a particular kind of ‘meeting’, not just the fact that Simon and Jesus have bumped into each other as one among many in a Galilean marketplace, nor a cosy bilateral on a Palestinian beach. Rather Simon has truly met Jesus, recognised Jesus Christ to be who He is: the promised one, the one sent from God, the one who will fulfil God’s plan of salvation for his people and the world. But it is important to note that Simon is busily going about his daily routine when Jesus arrives. To be more precise, then, it is Simon who has been met by Christ, and Christ who has intervened in Simon’s life. There is a subtle but important difference: it is not Simon who finds Jesus, but Jesus Christ who hunts out Simon, Jesus who reveals his own identity, Jesus who gives Simon’s life new purpose and meaning. Jesus is the prime actor here, and Simon, for his part, allows himself to be found, opening up his fears to Jesus and allowing himself to be discovered, to be shown who Christ is. Simon allows Jesus to take centre stage, not only on the beach, but in his whole life. Simon is open enough to Jesus’s work to allow himself to be set free from the shackles of his past, for a new way of living, to leave his boats and belongings on the seashore, and so to receive the new life that Christ gives him.

Simon would already have known something about Jesus. Earlier in the gospel we read that Jesus had healed Simon’s mother-in-law, and it’s clear that Simon has just about enough belief to cast out his nets again after a hard night’s fruitless labour. Perhaps Simon had thought that Jesus was a wonder-worker or a wandering sage. But putting nets out into the deep is a gesture of faith, one that defies human logic—in human terms it seems like it is the least sensible course of action, probably more deleterious than worthwhile, and certainly not good business acumen—but Simon is willing enough to give it ago on Jesus’s say so. It’s a gamble, but one taken in hopeful trust. And seeing the fruits, Simon is converted. Almost without knowing it, Simon is, by his conversion, brought into Jesus’s plan for the salvation of the world, given his own unique role to play. In falling to his knees in front of Jesus, Simon has taken the first steps toward becoming Peter.

It’s notable that both Isaiah and Simon Peter cite similar reasons for their reluctance to take up the office that they fear is about to be bestowed upon them: “I am a sinful man”; “I am in a wretched state”. These are not words of sinful collapse into the self—an escapism into selfishness, or a refusal to confront reality. Nor are these words reflective of merely human moments of self-knowledge. Rather, they are words reflecting a conviction made possible only in grace: only one who has been chosen, only one who has received the gift of faith, can truly speak these words with Simon. For it is by being brought into the presence of the glory of God (“seeing the Lord of Hosts”, as Isaiah puts it) that Simon and Isaiah are given the grace of insight into the immense infinity of divine love and so the grace of insight into the finitude and feebleness of the human condition. Simon’s “leave me alone” moment is not that of a sulky teenager retreating (amidst much door-slamming) into his bedroom, but, paradoxically, a moment of recognition, in which he sees his neediness before God’s all-powerful Love. Peter’s falling at the knees of Jesus is—though perhaps he couldn’t have put words to it—also a recognition that the fullness of divine glory dwells in Christ. The recognition of human wretchedness, then, is linked to an act of worship, placing Simon in the attitude of reverence, it is an act of hope that sees the glories to which God calls wretched creatures like Isaiah, Simon, you and me, not because they are worthy, but because they are loved.

The Lord replies directly to Isaiah’s sense of wretchedness, with words implicit to Jesus’s embrace of Peter: “your sin is taken away, your iniquity is purged”. This, too, is the mission of Christ, not only for Simon but for us all; Jesus coming to make all things new in himself. “Do not be afraid!” Jesus responds to Simon Peter, echoing the words the Lord speaks elsewhere to the Prophet Isaiah (Is. 41:10). Simon’s recognition of Jesus as the one sent from God, the promised messiah, could never be a neutral or inert observation. Simon’s recognition that Jesus Christ is the promised Messiah implies that Jesus Christ is somebody to and for Simon himself, somebody whose life will have radical implications for Simon’s own life. Many of the certainties of Simon’s life have, in a few short minutes, been shattered. It is perhaps with one eye on the comforts of his past and one of the consequences that this meeting will have for his future that Simon wishes that the Lord will leave him alone. For even if it has the certainty a glorious conclusion, and a joyful path, the road of discipleship is nonetheless tough, and sometimes dangerous. Though it gives more than it asks, it is nonetheless demanding.

There are, I suppose, times in all of our lives when we wish, like Simon, that the Lord would leave us alone. Times when Jesus asks us to do things that only make sense because it is the Lord who asks. Times when we have to allow ourselves to be found afresh by the Lord, so as to glimpse in grace the smallness of our own plans, fears and anxieties. “Do not be afraid,” the Lord says to us, if only we would hear him: “your sin is taken away, your iniquity is purged”.