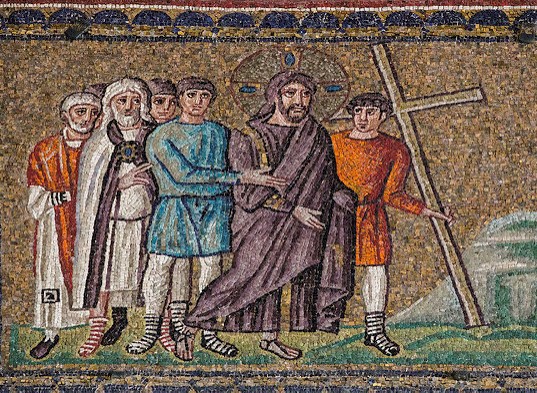 Thirteenth Sunday of the Year. fr Peter Clarke challenges us to reflect upon what we expect in following Jesus Christ.

Jesus resolutely turned His face towards Jerusalem. With grim determination He journeyed towards His destiny which He knew would be far from congenial. This was in loving obedience to what His Heavenly Father required of Him…the horrific death by crucifixion. With unsurpassable divine love Jesus lay down His human life for the redemption of mankind.

While preoccupied with such weighty thoughts Jesus was interrupted by the two most head-strong of His disciples, James and John. They were angry because the Samaritans would not receive them as they were preparing for Jesus to pass through their village on His way to Jerusalem. To us it’s incredible they should ask Jesus if He wanted them to call down fire from heaven to burn them up! Jesus simply turned to them and rebuked them.

In so doing Jesus said two things drawn from His own experience. ’In carrying out the will of God don’t expect always to be welcomed and rewarded.’ And, ‘Keep your cool when you’re resented and rejected.’ Today He’s speaking this to all of us, His Missionary Disciples. Time and again Jesus Himself was rejected in spite of His godly words and kindly deeds. Some simply walked away from Him, others slandered Him and yet others took up stones to pelt at Him. Jesus did not retaliate.

This applies to each of us who are in any way promoting the Kingdom of God. How many of today’s loving parents have met strong resistance when they have attempted to direct and correct their children? I myself, a priest working in parishes, have met with vehement opposition and resentment over some of the decisions I have made and the sermons I have preached. What about you? Surely your best efforts have not always been acclaimed?

Many of us, perhaps all of us, have had the fiery, destructive impulses of James and John. We’re still likely to have them. In such times a rebuke from Jesus will always be deserved. Most of us throughout our lives will need to learn from Him how to keep our cool.

As the shuffling crowd moved along with Jesus towards Jerusalem people would approach Him to have a word with Him. St. Luke tells us of two who wanted to be closely associated with Him. He didn’t discourage them but He did caution them. To one enthusiast He let it be known that He had nowhere of His own to lay His head. Doing God’s work alongside Jesus would not entitle him to a comfortable, flashy, well-appointed, life-style.

Then there was another such volunteer, and another whom Jesus invited. They were of the same disposition – eager to join Jesus when it was convenient to them, but not at that very moment. Most of us, I presume, would agree that at least one of them was entitled first to attend to the burial of his father, and the other, at least to take leave of his family.

Surely Jesus, a reasonable person, would see their point.

And so He did. He Himself continuously felt the sharpness of their point…the urgency, the absolute priority, of fulfilling the will of His Father – over against His own feelings and inclinations, not least His sensitivity towards the one He loved more than anyone else on earth –His mother. He did not have to be told the anguish He was causing her as the opposition to Him increased day by day. She would have seen Him as flirting with danger; as it were, nailing Himself to the cross. Jesus Himself suffered mightily because of this, having no choice but to subject her to this.

The Gospel Reading given to us by the Church today challenges you and me: In our following of Jesus do we really expect to meet with approval and even fame? Should we be rewarded with, are we entitled to, all the amenities and comforts of life in compensation for giving ourselves to Jesus and to His Church? Are we willing to do what Jesus expects of us, if and when it is inconvenient (heart-breaking) to ourselves?

I must say, ‘My own sermon has made me feel very uncomfortable!

The image above is from a 5th-century mosaic in the basilica of Sant’Apollinare Nuovo in Ravenna.

Fr Peter Clarke worked for many years in the English Province's mission in the West Indies. May he rest in peace.