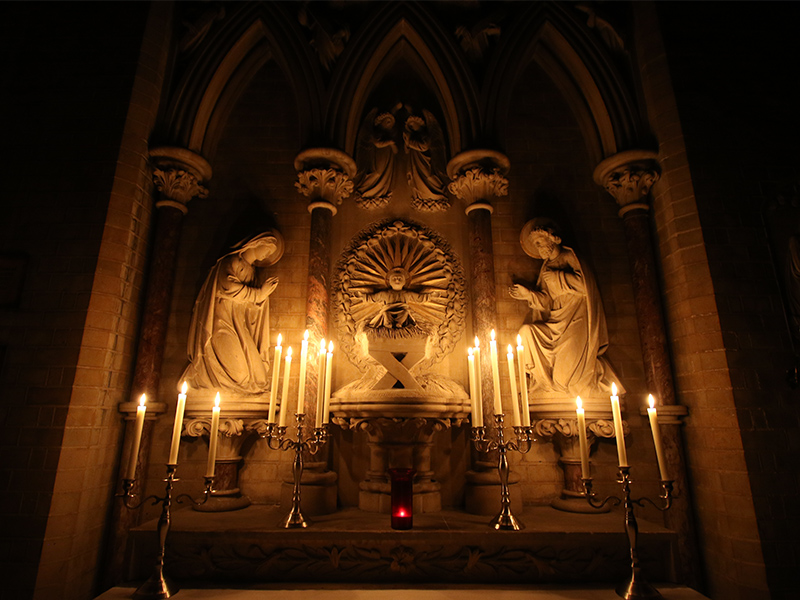 Christmas: The Nativity of our Lord  |  Deacon Toby Lees contemplates the two natures of Christ and the effect of Christ’s Incarnation on our human nature.

I’d like you to take a coin from your wallet or purse. Look at it. You can see it has two sides: nothing you didn’t know already contained in that statement, I hope. But try looking at both sides at once. Unless you have abilities I don’t, you’ll find that it’s not possible.* Two sides of the same coin, but you can only focus on one at a time.

I think it’s a little bit like this when we contemplate the Incarnation, we know that Christ is truly human, and we know He is truly divine. Two natures, one Person, and yet it’s extremely difficult to focus on both natures at the same time. This should not trouble us. The Incarnation, the fact that God became man, is the central mystery of the Faith, and it’s in the very nature of mystery that whilst we can come to some understanding through our reason, we will never fully comprehend it. This is as it ought to be, our awe and wonder for God should be inexhaustible.

Now at Christmas, as we gaze at the infant Jesus, only recently placed in the crib, the human nature of Jesus most obviously springs to mind. We contemplate, in the words of Gerard Manley Hopkins, ‘Infinity dwindled to Infancy’, the humility of a God who would lie in a manger, the Creator of all that is, lying prone on a bed of straw. We marvel that God should take on human flesh like us, that He would become vulnerable, that He would hunger and thirst. And then perhaps there’s a moment of sadness in the knowledge that this innocent child should one day suffer and die. And maybe there’s a tinge of remorse for our part in the suffering of others and the suffering that this life inevitably entails. There’s joy in our humanity, but there’s also great pain, and for many, there is no time like Christmas to bring this home.

But there’s a danger that if we only look at the human nature, only at the descent of God to man, if we only reflect on ‘tails’, so to speak, we’ll miss the bigger picture. If our contemplation at Christmas stops at ‘The Word became flesh and dwelt among us’, we’ll hear good news, but not The Good News.

Imagine you found yourself in prison, admittedly guilty, but with no prospect of release, yet longing for a life beyond bars. Now imagine that an innocent man broke into the jail, and He lived alongside you, He shared the hardships of your daily existence, and they were transformed by Him. Life took on another dimension, it became richer and you were shown a better way, a more perfect way. He spoke of Father’s house, with its many rooms, from whence He came, and of the love and mercy of His Father. And you loved Him because He had come to live alongside you and shown you what love looked like. All wonderful things, and yet . . . surely you would wonder, if this man can break in, might He not be able to break out, and might He not take me with Him to this beautiful house of His Father’s?

You are a child of God. Think about this, say, ‘I am a child of God’, because I don’t think we reflect on this enough, or if we do, I don’t think we always take on board what it means. Because what we celebrate on this night is that Jesus comes among us as a vulnerable child and transforms everything. Our human nature is joined to the divine nature and re-created. Nothing that Jesus does is without significance because His every action is the action of God. Jesus does not offer salvation as something He gives somehow independent of Himself; rather His whole life is our salvation.

We remember tonight as the night our mere human existence was elevated, the night we were called to become ‘partakers in the divine nature’. To be a Christian, to be a child of God is the greatest gift one could imagine. Resting in the power of God, and freed from previously unbreakable shackles of sin, we can start to live in the love of God. Trusting in the love of one who transforms all, who makes a throne of both crib and cross, one who can manifest His greatness in our weakness, allow yourself to be transformed by Love, and heed the words of Pope St Leo the Great:

Christian, remember your dignity, and now that you share in God’s own nature, do not return by sin to your former base condition. Bear in mind who is your head and of whose body you are a member. Do not forget that you have been rescued from the power of darkness and brought into the light of God’s kingdom.

* The lateral thinkers amongst you may have held the coin up against a mirror and seen both sides at once. Well done! Now be clever enough to see no sides: pop it in a charity box!

Photograph by Fr Lawrence Lew OP of the Nativity Chapel in the Dominican priory church in London, designated the Diocesan Shrine of Our Lady of the Rosary.