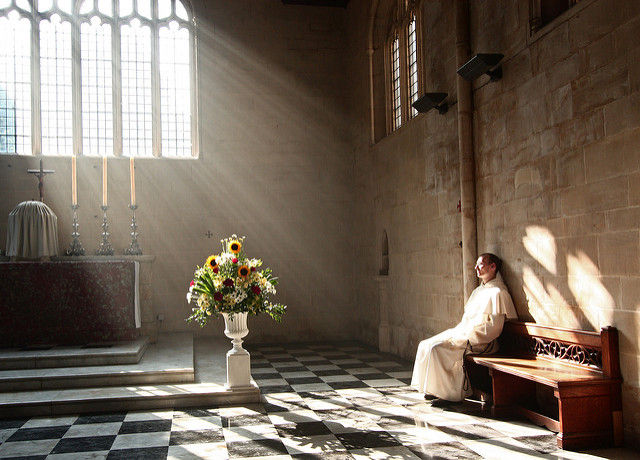 Sixteenth Sunday of the Year. Fr Toby Lees wonders why Christ is concerned that the Apostles should rest.

With some Gospel passages you can relate to the experience of the Apostles and disciples immediately, but I have always struggled to understand when people have told me ‘they had no time even to eat.’ There have been times when I didn’t happen to have anything at hand to eat, but never a time when something was at hand and I didn’t have time to eat it!

When the Apostles re-join Jesus, in today’s Gospel, tired and hungry from their first experience of the mission, which will give shape to the rest of their lives, it’s interesting to observe the pattern in which He responds to their needs. He will indeed feed them, and the feeding of the five thousand follows on immediately from the end of our passage today, but, first, He seeks to have them rest; next He begins to teach them; and only then does He feed them. Perhaps we might see something of the order of the Mass in this sequence?

However, it’s Jesus’ concern for the Apostles’ rest and what it might mean for us that I want to consider today, because I think we give insufficient consideration to what truly Christian rest might be.

While it’s possible that Jesus’ particular concern is that the Apostles should simply physically rest, I think when we read the Gospel today it’s important to observe that the rest is with Him: how often do we think of resting with Jesus? Or do we think of rest as something simply to be done between spells of work, and as primarily for the sake of work? I certainly don’t place such an emphasis on making sure I rest as I do on making sure I eat!

Sabbath rest is such a key part of the story of creation and still plays a central part in the life of Jews, but, I would hazard to say, for most Christians, our notion of the Sabbath goes little beyond the Sunday obligation on the Day of the Lord. But if this is the case we’re missing out on something really important.

In his treatise, Leisure, the Basis of Culture, Josef Pieper makes an important argument for the importance of leisure as more than the absence of the work. He thinks a proper understanding of leisure is essential for the revitalisation of western culture. He speaks of rest, properly understood, as the antidote to the restlessness that characterises so much of modern life.

He contrasts the two modes of operation of the human intellect, ratio, reasoning which is more akin to intellectual work, and intellectio, which is more passive, a received understanding, that spark of insight which comes to us in the action of contemplation.

And proper human rest should lead us to contemplation because to contemplate is essential to being properly human. So often people speak of ‘vegging out’, language which indicates that such an activity can never fulfil them completely.

Contemplation is the raising of the mind to God and to the things of God, not as problems to be solved, a conundrum to be figured out, but as a gift to be received. Contemplation is the antidote to that characteristic modern vice, acedia, which – far from being sloth, understood as aversion to work – is that rejection of the divine within us, that restlessness which leads us to see our fulfilment in everything but God. Aquinas thought acedia was a sin against the third commandment and a rejection of our humanity because it rejected the end for which God had made us: union with Him. Acedia is an unwillingness to rest in God.

Just as listening is essential to loving family and friends, there can be no love of God, no true love of self, without that stillness and silence which makes us receptive to Him. This rest might sound like another name for prayer, and prayer will be a part of it, but it’s something more too. It’s a recognition of the goodness of creation that surrounds us, it’s a sharing in the activity of God, looking at it and seeing that it is good.

For Pieper the highest form of affirmation of this goodness is the festival, in which is found the ‘union of tranquillity, contemplation, and intensity of life.’ For him, ‘to hold a celebration means to affirm the basic meaningfulness of the universe.’ He says that ‘in celebrating, in holding festivals upon occasion, man experiences the world in an aspect other than the everyday one.’ England, then, may not have won the Euros, but our celebrations should go on!