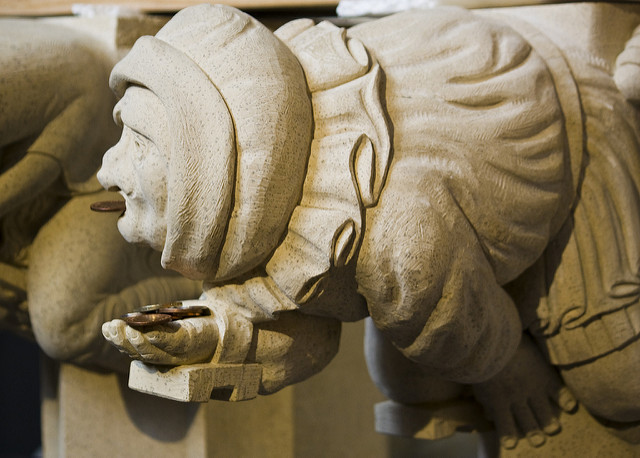 Sharing Possessions Makes You Rich in the Sight of God

Eighteenth Sunday of the Year. fr David Sanders reflects on the joys of sharing.

Our possessions are in a way an extension of ourselves. What we do with our possessions reveals the kind of people we are. They symbolise our character. In Luke’s Gospel Jesus is constantly warning us about the way we use riches and possessions. When Zacchaeus comes down from his sycamore tree, repents and turns to God his conversion is expressed by giving a half of his possessions to the poor. And then in Acts the apostles respond to the gift of the Holy Spirit by sharing their possessions with each other. They understand, what the whole Bible teaches, that God is the creator and giver of all good things. Life is not something we possess; it is a gift we receive. And we want share these gifts with others.

But it is so easy to forget this and to get caught up with acquiring possessions. We want more and more. Today someone wants to co-opt Jesus to help him get his inheritance but Jesus declines. Settling wills can be a terrible time in families when greed comes to the surface and Jesus knows what such avarice can do. It takes you over and makes you think that the more you have the more secure you are.

And so he tells a parable which shows just how the hunger for more possessions can isolate us and cut us off from life. A farmer has a really good harvest and instead of giving thanks to God for such abundance he turns in on himself. He does not have enough room for his crops so he decides to build larger barns which will house them. You might have thought that he was doing this so that he could then have a store of food to help his neighbours in time of famine. But no, it is clear he is only interested in himself. He sees increasing his possessions as a means of security. He can protect himself from the pitfalls which ordinary people face each day. The deadening effect of his greed is seen in his selfish desire for his own enjoyment and he uses a well-known formula for hedonistic living. ‘Eat, drink and have a good time’ but he has forgotten how the saying ends ‘for tomorrow we die’.

At this point his internal dialogue is rudely interrupted by God himself – which is unusual in parables. His self-regarding world is broken open and he is called a fool. Literally this is true for we read in the psalms ‘The fool says there is no God.’ The farmer acts as though there is no God. He thinks he alone can plan his future. But beneath his greed there lies a deep fear of the frailty of life and like so many like him, he thinks he can secure life with even more possessions. And like many in an acquisitive society he shuts out the thought of death which will prove that life is a gift over which he has no power.

The farmer ended up sadly dying alone, rich in possessions which would soon handed to another who had not toiled for them as Ecclesiastes points out. If he had wanted to really live he should have been ‘rich in the sight of God.’ What does that mean? It means that God alone can provide the security because he is the source of all life. And God provided a Law which taught how possessions must be shared, how the poor must be given the gleanings from the harvest. Sharing possessions is a sign that you have overcome the fear of the frailty of life and are willing to be generous to God’s creatures.

Avarice, greed, covetousness, each desires to have more and more, and each was regarded as a pernicious vice in the time of Christ for they destroyed society. Greed, St Paul tells us today, ‘is the same thing as worshipping a false god’. In our acquisitive society, where we are told to maximise profits and to buy what we do not really need, greed still isolates and divides our community. When the difference between what greedy managers and ordinary workers earn is becoming greater each year and avaricious businessmen milk every penny from the sale of their enterprises to increase their personal wealth, Jesus’ stern warning is still good news. ‘Beware of avarice for a man’s life is not made secure by what he owns.’ But trust in God, the giver of life, conquer your fear and have the joy of sharing your possessions with those in need.