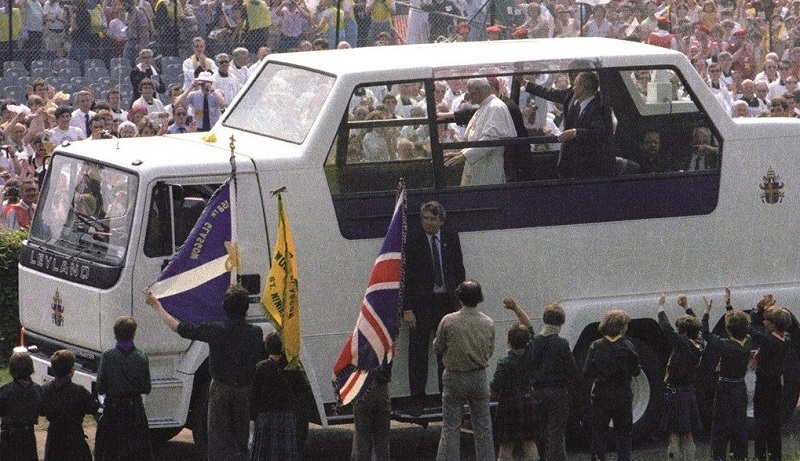 Torch
Home  /  Torch  /  Sometimes it is all about you

Sometimes it is all about you

Fourteenth Sunday of the Year. Fr Euan Marley ponders the failure of the people of Nazareth to recognise Christ as Lord.

I have seen with my own eyes two people who have now been declared saints. One was Pope John Paul II in his popemobile in Glasgow, where he was taken round the crowds, who were in separate rectangular areas, rather like the crowd in the first multiplication of loaves and fishes in the Gospel of St Mark (6:39-40). So we all had a good view of him. The other was Mother Theresa who came to Glasgow to speak on behalf of pro-life issues. I was late coming to Glasgow Green with my father, which meant she walked past us, only a few yards away. My father remarked that she looked like she was made out of stone. Since I was predisposed to think of them as holy people, it is hard to say whether I would have been so impressed if I did not know who they were and what they represented. I do think, though , that I would have felt some aura of holiness about them, under any circumstances. I might add a third person I saw close up was Br Roger of Taizé in Dublin. Again very close up, and again with a sense of something special, something other worldly, and with a strange sort of frailness which seemed like a sort of strength, but not human strength.

So if these servants of Our Lord seem so impressive, how could it be that when Jesus came to his own town, the small town where he had lived, grown up, and worked for a substantial part of his life, his sanctity was not recognised? Even though he was working miracles, and speaking words of wisdom, which the people of Nazareth acknowledged, they would not accept him. What had happened? I think it would help to understand his rejection, if we look at a contrasting passage from the Gospel of St Luke. This is when Our Lady visits St Elizabeth. Elizabeth speaks in words which very elegantly sum up the mystery of the Incarnation: ‘And from where is this to me, that the mother of my Lord should come to me?’ (Luke 1:43).

This is the rather literal translation in the Douai version of the Gospel. In a few Greek words, St Elizabeth sums up the incarnation which is not just a visitation of God, but a visitation of the God who is already human in the womb of Mary. There is no obvious sign that this is so, except the fact that John the Baptist leaps in the womb, and St Elizabeth sees this as a joyful acknowledgement of the Messiah. Why then does St Elizabeth see what the villagers of Nazareth could not? I would suggest it is because she is humbled by the presence of God and his Blessed Mother, aware that their presence to her is a great and undeserved grace. So she uses the word ‘me’ twice. Grace is perceived within herself and that grace brings with it the sense of wonder that God should visit us in such an intimate way.

The villagers of Nazareth do not think of themselves, so they do not perceive the grace of the visitation. They perceive the facts, the wonders he works, the family relationships, they see him as a mere fact, a puzzle to be solved. They do not consider themselves, and so they have no sense of shame to be in his presence. Pascal, the great French Catholic thinker, says in the Pensées that one of the marvels of the Christian religion is that it reconciles man with himself by reconciling him with God (Chapter 26). The villagers of Nazareth do not think about themselves and so do not perceive the wonder that God was among them in the coming of the Christ. Even if it would be too much for them to perceive the incarnation, if they looked at themselves, they might find in themselves something of the gratitude and humility which is the beginning of the presence of God.

In short, the Nazarenes do not perceive the fundamental truth about Jesus because they are afraid to accept the fundamental truth about themselves, that we do not deserve the incarnation. So think about yourselves, consider what you are, and no matter how poor and inadequate that self may seem to be, hold on to this unshakable truth, that it is in this undesirable location that God has chosen to dwell.