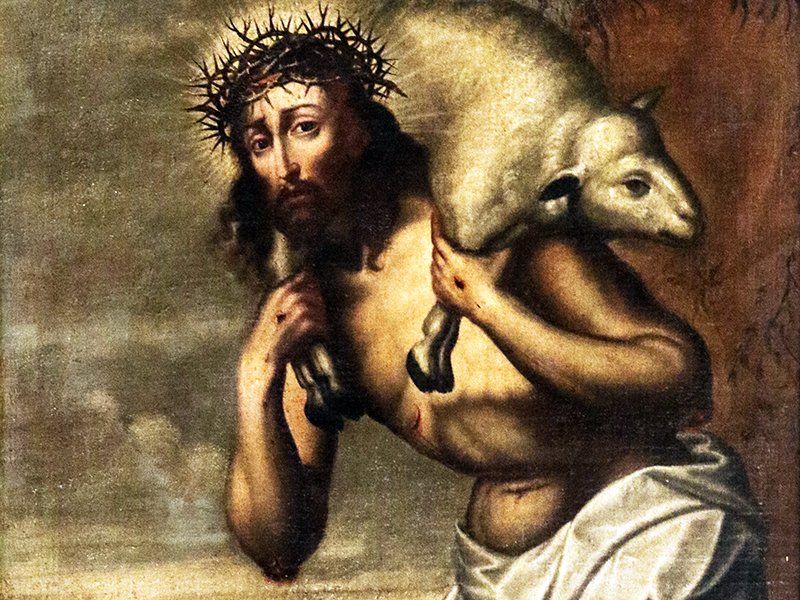 Fourth Sunday of Easter (A)  |  Fr John Patrick Kenrick reminds us that true safety comes from being in union with Christ even if this demands patient suffering with him.

‘Good Shepherd’ Sunday  conjures up one of the most comforting and memorable images of Jesus – the caring shepherd.  For many of us that image is likely to be coloured by the illustrations of a clean and rather respectable looking shepherd in the bibles we read as children.  We shouldn’t allow those pleasing pictures to colour our reading of the gospel.  Shepherds in New Testament times were rough, dirty and rather dubious characters, hardly people who were trustworthy.  Unless, that is, you were a sheep.  In a land where good pasture was not easy to find, the shepherd had a much greater role in finding the sheep somewhere they could graze.  He probably did ‘lead’ them and he probably did know each of his sheep quite intimately.  His own livelihood depended on keeping every sheep secure.  He would live close to the sheep, often sharing the same shelter and even sleeping in the gap through which the sheep would pass into the safety of the sheep-pen.

Those who listened to Jesus preaching were also acutely aware of the unpleasant demands of being a shepherd.  Most of them would also have been familiar with the Old Testament idea that a ruler is meant to be a shepherd to his people and that God is, in a sense, the perfect shepherd of Israel.

So how did they manage to miss the point of the parable?  The answer is not that like us they had an inaccurate image of a shepherd.  No, they failed to understand how this image could possibly apply to Jesus.  He clearly wasn’t as rough as a real shepherd.   He wasn’t obviously leading the crowd in a physical sense – very often he avoided the crowds and took refuge in solitude.  He may have provided the odd miraculous picnic but he was hardly in the business of regularly feeding his ‘flock’, still less of ‘protecting them’ from tax collectors, Romans or self-important clerics.  So you can see how they didn’t quite ‘get the parable’ when Jesus told it for the first time.

That is why in the gospel Jesus turns the imagery around and now calls himself the gate rather than the shepherd.  What the crowd have failed to grasp is that the intimacy between Jesus and his ‘flock’ is actually of a completely different order.  A parable can only take you so far.  Jesus is not just leading his people,  he really is feeding them in the most important sense of all. He feeds them with His words which are life giving.  He really is the entrance to eternal life.  Safety is not to be found in the sheep-pen per se, not even if you take the sheepfold to be the Church.  The safety comes from being in union with Christ.

So when Peter addresses the crowd in the first reading he doesn’t talk of Jesus as a great leader or even a great prophet.  It is not Jesus’ leadership or His wisdom that is decisive – it is the fact that He is the living expression of God’s will – He is both Lord and Christ.  The long expected Messiah has turned out to be rather more than a shepherd of his people in the tradition of king David.  By  preaching the crucifixion St Peter brings home to the people the fact that Jesus really gives us life, in fact His own life.  Dying for us and feeding us are part of one and the same mystery.  He is not just ‘a good shepherd’, he is the ‘never before experienced, unheard of shepherd, so mind blowingingly self-giving that He sacrifices himself for His sheep as the inevitable outcome of his love and care for them’!

The people listening to Peter are ‘cut to the heart’.  Peter’s words are now capable of having the same life changing effect as those of Jesus.  Like Jesus, Peter is now acting as a true shepherd, and like Jesus will give his life for the eternal well-being of his brothers and sisters.

In the second reading St Peter makes clear that it is not only the apostles who are called to imitate Christ’s radically new way of shepherding.   Yes, there are those called to be pastors, in a very visible participation in Christ’s ministry.  But in fact every member of the flock is being called to an exemplary witness, by accepting the suffering that comes from witnessing to Christ.

Our problem is rather different to that of the crowd addressed by Jesus.  We understand what is being preached only too well.  Our problem is the apparent difficulty in following St Peter’s lead.  How difficult it is just to do our duty – let alone to patiently suffer for so doing!   But after the Resurrection we should be thinking in an entirely new way.  Yes, it may be demanding but it must also be possible if Christ is asking this of us.

Photograph by Fr Lawrence Lew, OP of a painting in the church of La Concepcion in San Cristobal de la Laguna, Tenerife.