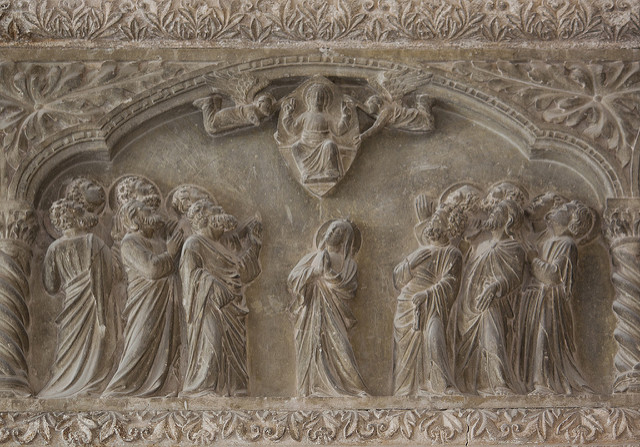 Torch
Home  /  Torch  /  The Ascension of the Lord

The Ascension of the Lord

The Ascension of the Lord. fr Robert Verrill helps us to understand St Luke’s account of the Ascension by comparing it with Christ’s transfiguration.

With our modern understanding of the world, the Ascension can be rather
hard for us to comprehend. After all, surely if you go up and up into
the sky, you don’t go up into heaven at all, but you just end up going
into outer space. So what was it that the apostles witnessed at the
Ascension and what does the Ascension actually teach us? Well, there’s
another story about Jesus which has a number of parallels with the
Ascension and that can shed some light on this question. This is the
story of Jesus’ Transfiguration.

It’s also significant that a cloud is mentioned in both stories, for in
the bible a cloud often depicts the presence of God. We’re told this
very explicitly in the book of Exodus, where the Israelites were said to
have been led by the Lord in a pillar of cloud. The Transfiguration and
the Ascension are very reminiscent of this. In the Transfiguration, a
cloud overshadowed them and they heard a voice in the cloud saying “This
is my Son, my Chosen; listen to him!” and in the Ascension, a cloud
took Jesus from their view. So the cloud is very symbolic of Jesus’
intimate relationship with His heavenly Father.

Another similarity is that in both the Transfiguration and the
Ascension, two men appeared: Moses and Elijah at the Transfiguration,
and two mysterious men in white at the Ascension. At the
Transfiguration, Peter wanted to make three booths in some kind of vain
attempt to hang onto this experience rather than see it as a preparation
for something greater; Peter wasn’t at all ready for Jesus’ departure.

When it came to the Ascension, the apostles were still not entirely
ready. As St Luke recounts, the apostles were left amazed staring into
heaven, and they had to be told by the two men in white ‘Men of Galilee,
why do you stand looking into heaven? This Jesus, who was taken up from
you into heaven, will come in the same way as you saw him go into
heaven.’

Jesus spoke with Moses and Elijah about His departure at His
Transfiguration, and this departure was fully realised at His Ascension,
but it was not a departure that left His disciples abandoned. In fact,
the Greek word St Luke uses for departure in his account of the
Transfiguration is the word Exodus. Thus, St Luke wants us to understand
the Ascension in the light of the Exodus story. Jesus’ departure is
about leading His people into freedom, into the promised land.

Jesus’ departure was difficult for the apostles to accept, but their
experience of the Transfiguration and the Ascension helped them to grow
up in spiritual maturity so that they could witness to the power of
God’s redeeming works.  The Transfiguration gave the apostles the
courage to accompany Jesus to Jerusalem where they would witness His
terrible suffering and death on the Cross, and the Ascension prepared
the apostles for Pentecost, that defining moment when the Holy Spirit
inspired the apostles to go out into the streets and give witness to the
glory of Christ’s death and resurrection.

It was at the Ascension, that the apostles came to realise that Jesus
Christ had been exalted to the heights of heaven, and although it’s
difficult to express what it must have been like to come to this
realisation, the point is not to dwell on exactly what the apostles
experienced, but to dwell on what was promised. The promise of the
Ascension is that since Christ has been exalted to the heights of
heaven, we too can share in this exaltation. When Jesus’ disciples
witnessed His Transfiguration, they didn’t leave rejoicing because as
yet they weren’t at all ready to share in the glory that they had
witnessed. But after the Ascension, the disciples did leave rejoicing,
because it was only then that they began to realise that what had
happened to Jesus was going to happen to them. Thus, our hope in our
celebration of the Ascension, is that we too will be raised up with
Christ and be glorified with Him, and this is certainly a cause for
great rejoicing.

The image above is a carved detail from a medieval sarcophagus in the Franciscan cloister in Dubrovnik, Croatia.