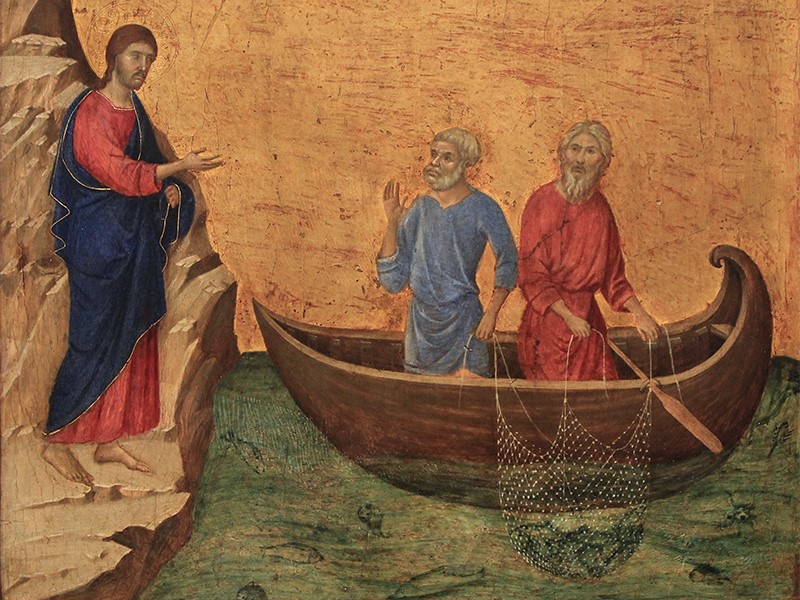 The Dangers of Love

Third Sunday in Ordinary Time (A) | Fr Timothy Radcliffe ponders the dangers of falling in love with the One who is Love incarnate.

After the testing in the wilderness, Jesus is ready to begin his preaching, but everything seems to go wrong. John the Baptist is arrested and so Judea, the heart of the Holy Land, becomes too hot for Jesus. He even leaves his home territory of Nazareth for Capernaum, “the Galilee of the Gentiles”, as it was called.

But as so often, this apparent setback is a new beginning. It foreshadows the community which will come to be, of Jews and Gentiles. It is here Jesus meets his first disciples. When we are forced out of our “comfort zone”, God’s grace brings new things into existence.
This too is the experience of those whom Jesus calls. These simple uneducated fisherman are called to leave behind the familiar life they inherited from their ancestors, taken out of their depth, and be caught up in the life of this alarming stranger. Eventually they will be despatched beyond the boundaries of the world they know.

Becoming a disciple of Jesus can be thoroughly unsettling. One has no idea what will be asked and how one will cope. It is a perilous adventure, especially alarming for our timid culture with its fear of risk and obsession with health and safety.
The great preachers of the gospel are those who are not afraid to lose control of their lives. For example, Samuel Mazzuchelli, born to a wealthy Milanese family in 1806, alarmed his family by joining the Dominicans when he was seventeen. At the age of twenty-two he was despatched to preach the gospel in the wild forests of the upper Mississippi, almost entirely alone. It was mad and we would hesitate to take such risks today, but it led to the establishment of the Church there.

God’s love often propels us into deep waters where we must either sink or trust in him. To love anyone is risky. Who knows what it will involve? How much more dangerous to fall in love with the one who is love incarnate. This is an invitation to lose control of our lives. This frightening call is the heart of Pope Francis’ spirituality: ‘There is no greater freedom than that of allowing oneself to be guided by the Holy Spirit, renouncing the attempt to plan and control everything to the last detail, and instead letting him enlighten, guide and direct us, leading us wherever he wills.’ ‘I have the sense of being in someone else’s hands, as though God were taking me by the hand.’ So the Christian imagination should defy the timid neuroses of our time.

Last summer the Polish Province was dispatching a number of our young friars to work in the refugee camps around Erbil, in northern Iraq. Of course it is risky; Christianity always is.
At Pentecost the disciples received the Holy Spirit that propelled them on a mission to the whole world. But they were reluctant to go and leave the small and familiar community of the early Church in Jerusalem. Finally it was persecution that dislodged them. God sometimes resorts to desperate means.

800 years ago, when St Dominic received the bull founding the Order of Preachers, he sent the brethren to preach and study all over the world. Some did not want to go but, for once, he insisted, saying ‘Stored grain rots’. Where might the Lord be sending us today?
We must dare to grapple with questions to which we have no easy answers and try ways of preaching that may well fail. When the waters of the deep threaten to overwhelm us, then, like Peter further on in the adventure, we shall find a firm hand reaching out to lift us back into the safety of the boat. Let us not be afraid.