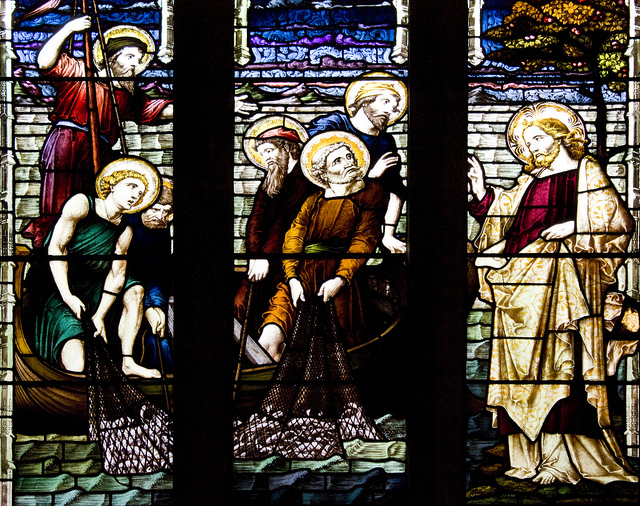 The Deep Serenity of Grace

Third Sunday of Easter. fr Dominic White invites us to rest in the experience of the risen Christ.

A friend who knows me too well once gave me a fridge magnet, on which was written, “Lord, give me patience, but I want it right now!” I like to think I’m more patient than I when I first became the proud owner of that fridge magnet. But there’s still a way to go. And (if I may say in my defence) we do live in a society which is all about now – and it’s perhaps all about now because it has no story for the future.

So we need hope for the future as well as patience. And the Easter story offers us both. Incidentally, we often speak of “the Easter story” as the story of Holy Week. But Easter itself is about the Lord’s Resurrection from the dead, and how he reveals himself risen to his disciples, how he gives them Resurrection. And this is a story which continues to this day, with us.

Unlike before his death, when Jesus was more or less “on tap” for his friends, now they feel much more his absence – and when he does appear to them, it’s never when – or how – they expect. This time, they’re out fishing – back to the old job. But no success. An irritatingly simple suggestion from a stranger on the shore, and they net a record catch. ‘It is the Lord.’ They have a resurrection moment, the passage from the sterility of death to the abundance of life.

And notice that Jesus is not just a “vision”, still less a ghost. He meets them over a meal. He is bodily. This is not a god of escape, but the true God who meets us in the physical everydayness and indeed the crosses of our lives. Because of this, he bestows the power of his forgiveness on Peter and works patiently through his three denials with him in an almost therapeutic manner – healing at the root. Jesus’ forgiveness is no less than the power of the Resurrection, the power which will enable him and the other apostles to witness to the Risen Lord with courtesy and courage in the face of opposition and persecution.

John, “a prisoner for the Lord” in the mines of Patmos, is given a vision, “on the Lord’s Day”, Sunday, the Day of the Resurrection – a vision which takes him into the depths of the present. Amid the music and incense of the heavenly liturgy, he sees the meaning of history, the consequences of evil, and the triumph of the Lamb that was slain. The whole of creation is resurrected and glorifying God.

The Lord continues to reveal the Resurrection to us, often right in those moments when we are immobilised on our crosses – perhaps we need to be immobilised so that we’re not too busy, too impatient to see. Sometimes it is a sunset, a piece of music, the play of the light, or maybe more often a chance word from a friend, or a look, a silence which speaks love, an act of forgiveness – and invites us to think differently. Our conditioning may tempt us to rationalise it. The patience of the Lord invites us to sit with our experience, sit with rising awareness, to “abide in me as I abide in you”.

Let us abide in that risen life, pray for the grace to remain patiently in the knowledge of the Resurrection. In times of trial it will give us the same courage and graciousness of Peter and the apostles. Not the voice of bigotry which exchanges fear and bigotry for more fear and bigotry, but the deep serenity of grace, a serenity deeper than emotion.

The image above is from Newcastle Cathedral.