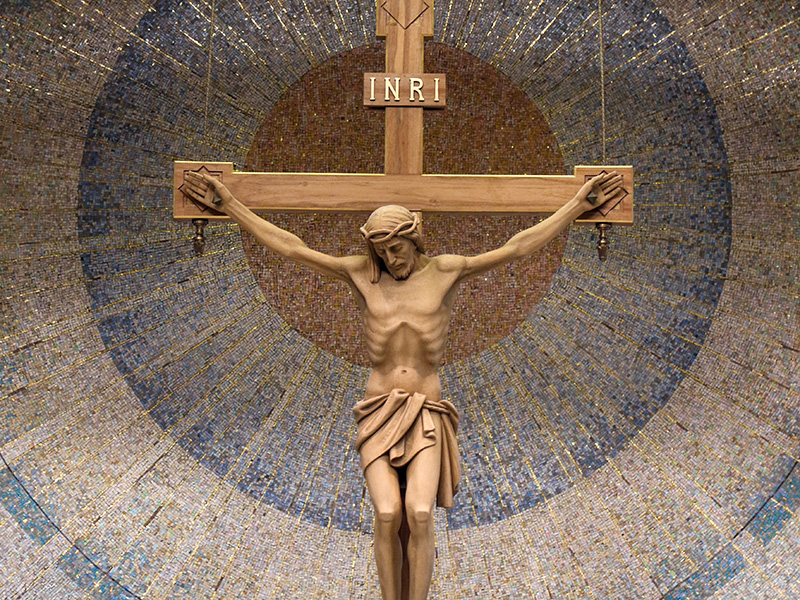 About a third of St Mark’s Gospel – a sizeable chunk – is devoted to the events of what we have come to call ‘Holy Week’, the week leading up to the death of Christ. That week began with the enthusiastic crowd shouting ‘hosanna’ – a cry approximating to ‘save us!’, closely related to Jesus’ own name in Hebrew. But the week ends, so it seems, in tragedy: an apparently forsaken Jesus dying before a jeering crowd. The two passages we read today form the bookends to that week, and the climax to Mark’s work.

Mark is the only one of the evangelists who seems to give his book a title; he opens his gospel with the words, ‘The beginning of the good news [i.e. the ‘gospel’] of Jesus Christ, the Son of God.’  But given the turn of events we have heard today, we might wonder whether ‘good news’ is such an apt description.
Mark includes the curious detail of the young man who fled naked from the scene of Jesus’ arrest, a witness the tradition often identifies with the evangelist himself. Did this embarrassed, fleeing, frightened man, or the other scattered disciples, think at the time that what they were witnessing was ‘good news’? I suspect not.
But there is another witness to these events, a witness whom Christ himself calls to testify with what, in Mark’s account, are his last words from the cross: Eloi, Eloi, lama sabachthani, ‘My God, my God, why have you forsaken me?’.

Just as Mark gives a title to his book in the first verse, and just as many songs and hymns today are known by their first line, so too with the psalms. ‘My God, my God, why have you forsaken me’ is the opening line of Psalm 21 (22), selections from which are the responsorial psalm at today’s Mass. We mustn’t in any way diminish the real anguish of this cry from the crucified Christ; nevertheless, it shouldn’t be understood as a complaint about God, but rather as an impassioned calling on a witness. And that witness is the plan of God as expressed in the psalm.

Yes, the psalm witnesses to the passion of Christ, to the crowd’s derision and mocking, to the piercing of Christ’s hands and his feet, and to the lots cast for his robe. But interspersed with those torments in the first half of the psalm are verses where the text affirms God’s faithfulness down the ages, his closeness to the psalmist with whom Jesus identifies, and the salvation he promises. The second half of the psalm is a hope-filled proclamation of the greatness of the Lord and the deliverance he brings, beginning with Israel but reaching to all nations and through all ages.

Mark knows very well, from his own experience, that the events he relates are only the beginning. The early Christians, reading Mark’s account perhaps a few decades after the events described, share that experience. They already know that Jesus is risen from the dead. They already know the deliverance and salvation worked by him. They themselves have been baptised, have been clothed anew in Christ, and have been part of continuing and proclaiming the good news telling of the Lord’s greatness to every generation throughout the world. By singing the psalm they participate with their own lips in living out the Divine testimony it contains.
Nor is it as if the good news comes to an end with the time of those who themselves witnessed these events. No, for the psalm concludes by saying that posterity shall serve the Lord, ‘and proclaim his deliverance to a people yet unborn’, to us, that is, and to our children. So we are there too, on the lips of Jesus, as he calls this psalm as his witness in his dying words.

This week is perhaps the end of the beginning of the good news of Jesus Christ. But the good news continues, and we are part of it as we bear witness, as we sing ‘Hosanna’, as we sing the psalm, and as we proclaim that Jesus has indeed saved us.