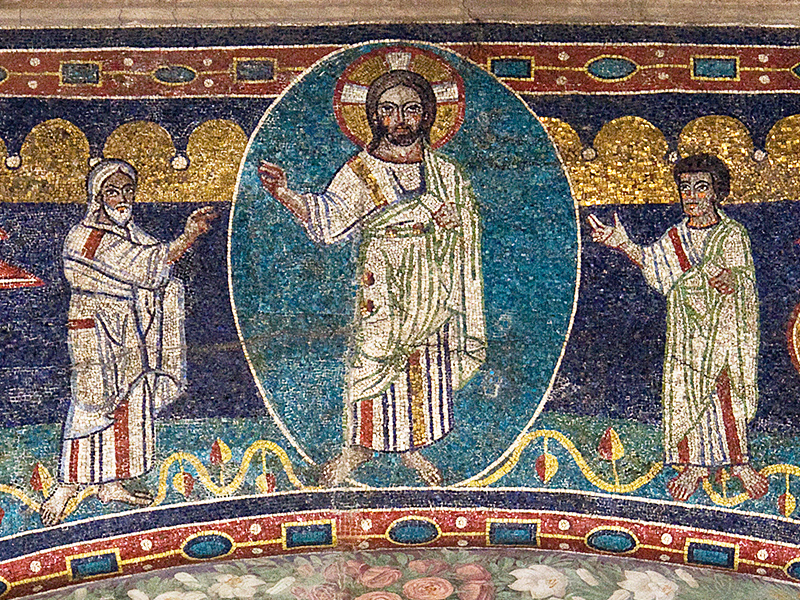 Even before he mentions Moses and Elijah, Mark puts us in mind of them by saying that Jesus took his three disciples up a ‘high mountain’. This reminds us of Mount Sinai where Moses received God’s law; and it puts us in mind of Mount Horeb where the prophet Elijah received instructions from God. Both these men of God experienced powerful manifestations of God’s glory on these high mountains.

On Sinai there had been thunder, lightning and thick cloud and something like a trumpet blast, and smoke and fire. And then, having ascended the mountain, Moses heard the voice of God delivering his laws for the people of Israel, and then he saw a vision of God with a pavement of sapphire stone beneath his feet. After that Moses waited alone on the mountain six days before God called out again to him from within the cloud, appearing as a devouring fire on the mountain top. That is how Moses experienced the God of Israel.

Then in the case of Elijah, ordered to stand on the mountain before God, we have another experience of this kind: God passing by, but the Lord is not in the strong wind that rent the mountains and broke the rocks; nor is he in the earthquake or the fire that followed, but he was in the still, small voice that came at the end. For all these great epiphanies of fire and earthquake, cloud and sapphire, it was the voice in which God was truly encountered.

And yet, in today’s Gospel, both prophets hear the voice of God again on a high mountain, but in a still more powerful and significant way. Here there is no thunder, no lightning, no wind, no fire. Instead, they see Jesus. The glory of God is manifested not in fire and thunder, but in Jesus whose body and garments are turned dazzling white.

Yet still there are voices. At the end of the episode, a cloud appears in Old Testament style, a voice coming from it, just as in Exodus, and this voice bears witness to Jesus: ‘This is my beloved Son, listen to him.’ The Old Testament style voice points us to the New Testament Voice that had already been speaking. Jesus, the beloved Son of God, had already been speaking with Moses and Elijah, just as they had conversed with God hundreds of years before but now through the Voice of God’s only Son, the Word incarnate. And the Old Testament voice from the cloud makes its last declaration: listen to the voice of Jesus.

As if to make the point, at the end of the vision Moses and Elijah, the very embodiment of the Old Testament, representing the law and the prophets, just disappear, leaving Jesus alone for us to listen and be obedient to. So the point is clear: Jesus is the Voice of God.

But this was not performed for the benefit of Moses and Elijah. It was performed for the benefit of Peter, James and John, the three disciples before whom Moses and Elijah appeared talking with Jesus, and through Peter, James and John it was done for our benefit too. Today’s Gospel began with the words ‘After six days’. Just as Moses had six days preparation before God spoke to him on the mountain, so we have an empty six days here.

But Mark is deliberately linking the story of Jesus’ transfiguration to what has taken place six days before. And that was Jesus’ prophecy to Peter and the others of the fact that he must suffer, be crucified, and rise again. And this was so shocking that Peter turned on Jesus and Jesus turned on him. And then Jesus called on his disciples to embrace the same suffering, to deny themselves, to take up their crosses and follow after him, to lose their lives for his sake. If they are ashamed of him and his words, then he will be ashamed of them when he comes again in dazzling glory.

It is this need to share Christ’s cross if we are to share his resurrection that stumps the disciples, and it is something that often stumps us too. It is difficult to understand and difficult to accept, though we have to listen to him and not be ashamed of his words, if he is not to be ashamed of us.

But, despite circumstances, it is not all gloom now. Jesus ends his prophecies of suffering by promising that there were some standing with him who would not die until they had seen the kingdom of God come with power, experienced an anticipation of Christ’s coming glory to sustain them through their crosses. And that’s when Mark says ‘After six days, Jesus took them up the high mountain.’

The disciples are offered a glimpse of the interior glory of Christ’s heavenly soul, and of the heavenly body that will be his after the resurrection. With all their fears of Christ’s passion and their own, this vision of glory was given to sustain them, and to keep them listening to Jesus, however difficult his words might be. Even during the vision, Peter still seems to be getting it wrong: his garbled words about building tents for Moses and Elijah perhaps show that he thought the time of glory had definitively arrived, and no suffering was to come. But he was directed again by the voice from the cloud to listen to the words of Jesus.

We of course have something greater to sustain us: the revelation of Christ’s resurrection to our faith, the gift of the Holy Spirit in our hearts, the examples of the saints, and the gift of Jesus himself. If we suffer in our lives, if we discipline ourselves in Lent, it is not without knowledge of the glory where it will all end, a glory already in our lives through Jesus Christ. So we have no reason to turn away and ignore Jesus, but we have every reason to listen to him and never be ashamed of his teachings. And then he will never be ashamed of us.