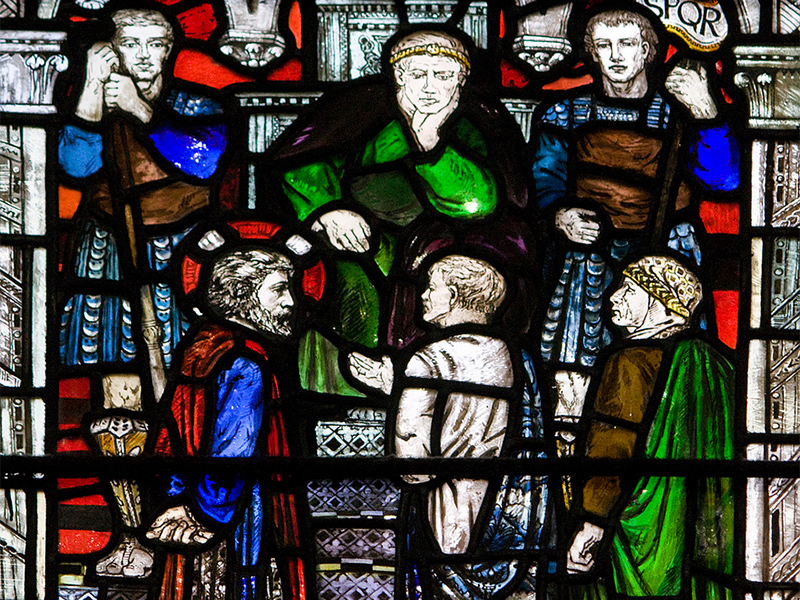 Solemnity of Christ the Universal King (B)  |  Fr John Patrick Kenrick says that Christ’s kingship bears witness to a truth that endures for ever.

When we read the uplifting words of the prophet Daniel foretelling the coming of the Messiah we realize that those words apply to Christ and his coming in glory; that day when the eternal kingdom of Christ will be apparent to all.  Daniel was conscious that the rich and powerful empires that had dominated the world and overshadowed the history of Israel were passing away and that the Messiah would rule over a different kind of kingdom in which people would forever acknowledge the true God, the God of Israel.

In the second reading from the Apocalypse St John is clearly referring to the prophecy of Daniel and he makes it very clear that Jesus Christ is this promised king Messiah.  But St John gives us a more detailed image of the future kingdom.  Jesus is certainly above all earthly rulers but he is also a very different ruler for two reasons.  First, because he loves us he has washed away our sins, including the whole history of human violence.  Even those responsible for killing him will not be prevented from seeing him and there will be a moment of truth when everyone will be conscious of how little we understood and appreciated God’s saving intervention in the life and death of Jesus.  And secondly, Jesus has not only forgiven us, he has also raised us to the status of his own kings and priests, a status conferred on us in the anointing with holy oil at our baptism and confirmation.

So when St John calls Jesus Christ the faithful witness, he means that Jesus is a unique witness to God’s love for us.  He doesn’t just tell us about God’s love for us, he opens up for us the whole mystery of God’s infinite love for us because he is himself the Son of God, who is Alpha and Omega – the one and only being who is truly sempiternal, beyond time itself.

And St John tells us pithily.  ‘This is the truth’.  It is as though St John is saying ‘forget anything else you have ever heard, because this is the most important thing to understand and accept.

When we come to today’s gospel reading, from the trial of Jesus before Pilate, we find Jesus referring to the very same truth.  Jesus has been accused of calling himself a king and Pilate’s own concern is political.  All he wants to know is whether Jesus is a political agitator claiming some kind of earthly kingship.  And Jesus makes it very clear that His kingdom is not of this world.  That is good enough for Pilate.  He immediately realizes that Jesus is no political threat.  So this might have been a wonderful opportunity for Pilate.  No longer threatened he is now curious to know what other kind of kingship there might be.  Jesus’s reply is that he bears witness to the truth.  If Pilate had given him the opportunity Jesus might have gone on to explain that this truth is about God’s love for humanity.  But Pilate’s reaction was the sceptical response of a half-educated man – ‘what is truth?’

So, on the one hand Pilate is impatient to know the truth about Jesus but on the other hand his Roman education and his experience of the world has made him profoundly sceptical.   And that inability to accept the reality of objective truth not only makes him deaf to what Jesus is saying, it also makes him into a very poor judge.  He knows that Jesus is innocent of the charge against him and yet this truth has so little value that he will sweep it aside just to keep the mob happy.  Truth and morality are connected – but reason alone will fail to grasp this without the insight that comes from faith in God.  That is why the rejection of Christianity in western society is leading to the ‘breakdown of society’.

Today’s readings look back in time and look forward, but they are also very much about the present, because the kingship of Christ has been an ever present reality since Calvary, since that moment when Christ demonstrated the infinite love of God on the cross.

It is not just at the end of the Church’s year but each and every day that we face the reality of Christ’s kingdom.  We can be sceptical or weak like Pilate and ultimately capitulate to the idea that actually all that matters is not rocking the boat, going along with the majority just for the sake of peace and quiet.  Or we can rise to the challenge of God’s truth, that actually a God of infinite love and mercy is in charge of this world, and we have to bear witness to that like Jesus himself, whether people listen or not, confident in the knowledge that one day they will all see and understand.