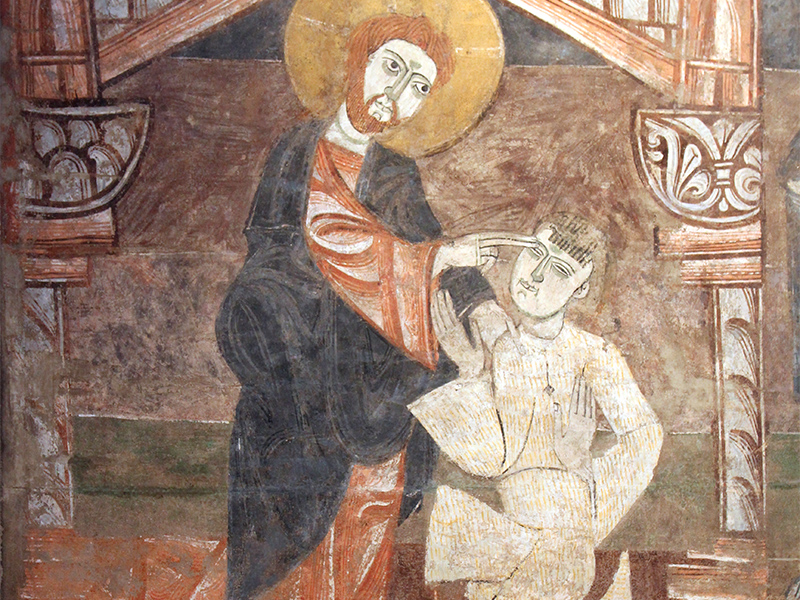 The Vision of Faith

Fourth Sunday of Lent (A)  |  Fr Robert Gay calls us to rejoice in the gift of faith that enables us to see things fully as they really are.

Today a lighter tone is introduced into our Lenten season, where purple gives way to rose, and our more sombre Entrance Antiphons are put aside, in favour of a call to rejoice. These are the unmistakable signs that we have reached Laetare Sunday, a little oasis in the midst of our penitential season, which has hints of the festivities to come. This change in tone is very important for us. So often, in the attempt to take the Lenten season seriously, and our efforts at prayer fasting and almsgiving, we risk becoming a little too gloomy – falling into the trap of the fasting hypocrites we heard of in our Gospel for Ash Wednesday. Today the call is to rejoice, be joyful and exult.

This changed tone is also reflected in our beautiful Gospel reading today, where Jesus heals the man born blind. What draws the attention perhaps more than anything else in this account is the way in which the man is healed. Jesus restores his sight by making a paste with the dust of the ground and spittle, and then covering his eyes. He then tells the man to wash in the Pool of Siloam, and his sight is restored.

The making of that paste from the dust of the ground has strong echoes of the account of the creation of the first man, the account of which we hear of in the book of Genesis. Adam is formed from the dust of the earth, and God breaths life into him, such that he became a living being. There are hints that what Jesus is doing in this healing miracle is an act of creation – to give a man the gift of sight, when he had never been able to see before is to create him anew. But Jesus doesn’t just give him the ability to function well ‘naturally’, as it were. There is a supernatural element, something going beyond the merely natural, to the man’s new found sight. He isn’t merely able to see, just like those around him. Rather, after he has washed, he has been given the gift of faith, and so he sees much more than the others, more than the Pharisees and those who question him. It becomes clear that others, who were able to see, are blind in comparison to him. They are in the dark, unable to see or accept what Jesus has done for this man. The blind man has been taken out of darkness, into the natural light, and then into the supernatural light of faith.

The supernatural gift of faith is one which enables us to see as God would have us see. First of all,  it enables us to see the truth of his Son, the Word Incarnate. To recognise him as the Son of God is to recognise the one by whom God is revealed, and therefore to be drawn into the truth that comes from God. It is this truth that is the foundation for everything else that we know. And having seen this truth we as Christians ought to build our picture of our lives on that foundation, with Christ as our reference point for our thoughts, words and deeds, and the goal towards which our lives are aiming. If we live by ‘natural’ sight alone, the world can be a difficult and often harsh place in which to live, and we can struggle a great deal to make sense of the world and of our lives. But when we live through faith, our lives are then given shape and content, a goal and meaning. To see things fully, as they really are, requires this supernatural gift.

So being people of faith, let us rejoice this Laetare Sunday, and give thanks for the gift of faith – God’s free gift of believing in him. And let’s ask as we continue this Lenten season that the Lord might increase that gift in us, and that our Lenten observances might better prepare us to receive that gift.

Photograph by Fr Lawrence Lew OP of a medieval mural from Soria, now housed in the Cloisters Museum in New York City.