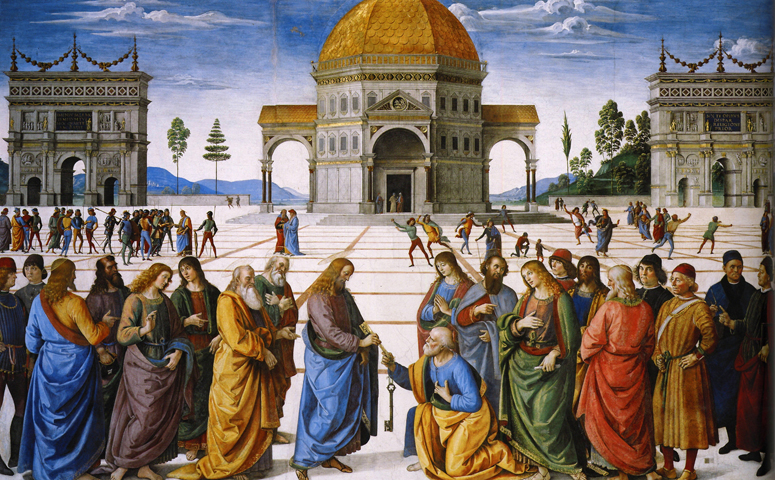 Twenty-first Sunday of the Year. Fr Nicholas Crowe explains why the gift of the keys to Peter is a gift to all humanity.

In our first reading from the prophet Isaiah we were introduced to Shabna, the master of the King’s palace, a position that – the scriptures scholars tell us – broadly corresponded to the role of the Grand Vizier in the Egyptian court. As such, Shabna would have been the keeper of the palace’s keys. This might not sound too impressive to a modern audience, but in the ancient world it was a powerful statement: Shabna’s keys proclaimed that he was a man who could, both literally and metaphorically, open doors. Specifically, he could unlock the doors that led to the King and so grant access to power. Shabna’s keys were the keys to the Kingdom.

The ire that Isaiah directs towards Shabna suggests that Shabna did not use this enormous influence well. Instead of advocating and supporting works of justice and the pursuit of holiness, Shabna enriched himself in an extravagant manner. For this, Shabna was rejected by God: Isaiah prophesied that Shabna would be removed from office and the key of David would be ‘placed upon the shoulder’ of a more worthy servant. In the short term, this meant Eliakim, son of Hilkiah. Yet there was more to Isaiah’s prophecy than just palace politics. Isaiah’s words pointed forward to a deeper fulfilment that comes to fruition in our Gospel reading. We heard Jesus say to Simon Peter:

Shabna held a physical key that gave him access to a King of Judah, Hezekiah, in the eighth century before Christ. But this King Hezekiah and his Kingdom were only preparations for the coming of the true King, the King of Heaven, Jesus Christ, to establish his reign on Earth. We learn in our Gospel reading that the keys of Jesus’ Kingdom have been given to Peter: Peter is the one who can unlock the mysteries of the Kingdom for other people. And the key that allows Peter to open the doors of Jesus’ Kingdom is his faith. Peter’s profound recognition of Jesus’ true identity is the key to the Kingdom of heaven. We heard Jesus ask his disciples:

Who do you say I am?

It is Peter who witnesses to the truth:

‘You are the Christ’ he said ‘the Son of the living God.’

And in testifying to that truth and sharing this grace filled intuition about who Jesus really is, Peter opens the door to faith for his brothers and sisters. This fundamental insight into the truth about Jesus’ identity is the foundation of the Church’s life and her teaching on faith and morals. The Church is founded by Jesus, we are the Body of Christ, yet Jesus has chosen to build his Church on the rock that is Peter. The faith of Peter, handed on by the Church to each successive generation and explored and developed in thought and prayer over the centuries, is the key to the Kingdom.

We believe as Catholics that by a gift of the Holy Spirit the successors of Peter, the Popes, inherit his keys. By this we mean that the Church will always be able to open the doors to the Kingdom in her Sacraments and in her preaching and teaching because she will always be guided by the Holy Spirit to recognise the Truth about Jesus. As the Bride of Christ, the Church will always, fundamentally, be able to know and love her Bridegroom. The keys of Peter, then, are a gift to all of us. They open up to us the possibility of an extraordinary depth of intimacy with Christ our King and our God. May we pass joyfully through the doors that Peter and his successors open wide for us, and so enter in to the courts of the heavenly palace of our King,  and may we be bold in inviting others from far and wide to come with us and share in his banquet.