Nineteenth Sunday of the Year. Fr Benedict Jonak encourages us to follow the example of Abraham as we look forward to the end of history.

I don’t know anybody who thinks that the end of world is a good thing; actually I know very few people who want the end of the world to happen. Yet this certainly is a desirable event, when at the end of time Christ will come in glory.

The end of the world is Good News. In today’s Gospel Jesus gives us the promise of the end of the world specifically as a consolation and not as a cause for anxiety: ‘Fear not, little flock, for it is your Father’s good pleasure to give you the kingdom.’

We were given the promise that when the master comes he will reward his faithful servants. Of course there have been many people who claim that they do their master’s will. Pointing to God as the one who is the source of our actions can become a way of avoiding taking responsibility for our behaviour.

This is, however, not what being a faithful servant means. The Epistle to the Hebrews gives us examples of the ‘men of old’ who were such faithful servants. Unsurprisingly the story of Abraham whom we call ‘our father in faith’ has a prominent place. Abraham left his homeland, and came into a foreign land. This was because of the trust he had in God. He had a son in old age, even Sarah his wife was barren, because he believed that God who made the promise to his was trustworthy.

Being a good and faithful servant, then, requires us to have a relationship with God based on trust that his words are life-giving, that they are true. It means to be open to his life-giving word. This is not an empty phrase. Being open to God is essentially about being a good host, waiting for him to arrive and listen to what he says. This openness and trust is one of the most fundamental elements of the Christian life. We need to realize daily that we are waiting for God. We need to express daily our willingness to do his will, whenever it takes us.

Abraham, faithfully listening to the word of God, was ready even to sacrifice his son Isaac. It is shocking, even disgusting, to think that somebody was willing to sacrifice his own son to God. Is this not an expression of a fanatical belief? This is a question that needs to be answered here, however briefly.

First, fanaticism is a caricature, a perversion of faith. It may be perhaps described as a magical approach to faith whereby we want to gain certain benefits by performing some (ritual) actions. Fanaticism has little place for a living relationship with God, who never asks the impossible of us. This cannot be said about Abraham.

Second, Abraham ‘hoped against hope’ that his son will be restored to him, even as he was willing to sacrifice him. Essentially Abraham’s readiness to sacrifice his son is an act of trust, of faith, in which he was proved right.

The faithful servant is expected then to take some radical steps: Abraham was asked to sacrifice Isaac, and Jesus asks his disciples to sell their property and to give alms. Both calls show the faithful servant in action as a person who is aware that God is Lord over life and death and that this life extends beyond the grave.

Today’s Gospel is of course challenging for us. It questions our priorities and it questions the motivation for our religious actions. Let it be an inspiration for us. Let it renew our dedication to do God’s will and be constant in prayer as we await Christ’s second coming at the end of time. 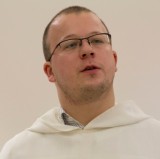 fr Benedict Jonak lives in the Priory of St Paul in Berlin where he is engaged in pastoral ministry for the Province of Teutonia.
benedict.jonak@english.op.org