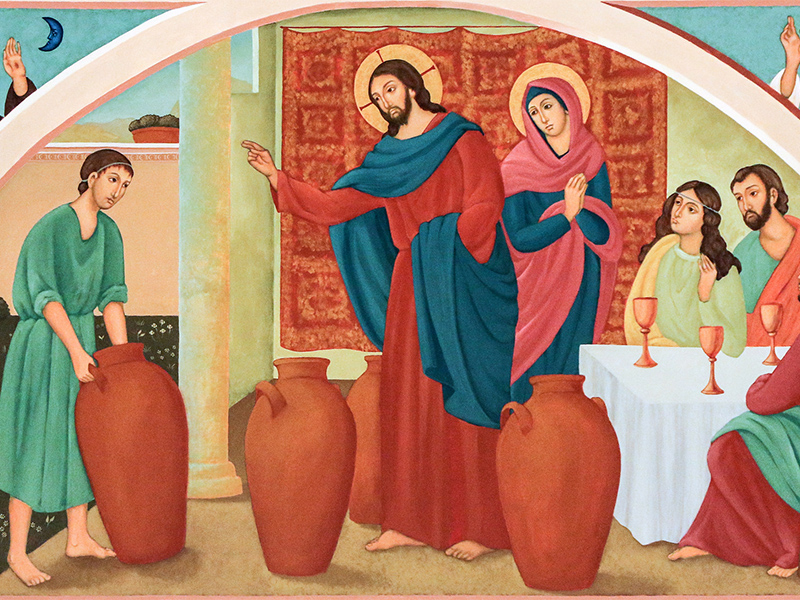 2nd Sunday of Ordinary Time (C)  |  Fr Dominic Ryan analyses the various elements of today’s Gospel to show us the significance of this miracle.

Today’s gospel recounts the famous story of the wedding feast at Cana. It’s the first manifestation of Christ’s divine power and I’m sure we all know the story well. Jesus was attending a wedding with his mother when the hosts ran out of wine. At Mary’s suggestion Jesus changed water into wine, so that their hosts could avoid the embarrassment of not being able to serve wine to their guests. In some ways it’s a strange miracle. Jesus was clearly reluctant to intervene, pointing out that his “hour had not yet come” and in the end appeared only to act because Mary encouraged him to do so. So what’s this all about?

Well, take the act itself, converting water into wine. That’s not something any of us can do. Certainly, we can add a few grapes, jump up and down on them, heat the mixture up, and do whatever else is necessary to make wine. But that’s not the same as converting water into wine, not by a long chalk. What we have here is the power of God manifesting itself in the world to bring about something only God could do, namely change a quantity of water into the same amount of wine. It’s about God acting through Christ in a way that gives us a sign of who is at work here; only God can act in this way and since Christ is acting in this way then Christ must be God. So it’s about an implicit confirmation of who Christ is. And it’s about Christ beginning the public phase of his mission. Christ will redeem the world from sin. He’s got the power to do that and this wedding feast is a demonstration of that very power.

Yet there’s more. I don’t think it can be a coincidence that the containers the water was in were used for Jewish ritual ablutions. Ritual ablutions were governed by Jewish ceremonial precepts. They were in essence part of the Old Law of Hebrew Scripture and when the Word became incarnate, he would perfect this law. As a result, there would no longer be any need to follow Jewish liturgical and ritual practice. And subsequently the need for ceremonial precepts would diminish so that they together with Jewish judicial and moral precepts would be perfected and fulfilled in the new Law of the gospel, the Law of Grace. Nor should we ignore the enormous quantity of water that was converted into wine – more than 100 gallons. It’s clearly symbolic: water is to the Old Law what wine is to the new law of grace. And just as there would be no shortage of wine at Cana, once Jesus had acted at least, nor would there be any shortage of grace in the new Law of the gospel, which Christ would inaugurate through his life, death and resurrection.

But as well as the act we can also consider the roles of those who witnessed it, Our Lady and the servants. Take Our Lady; she has a crucial role here, one that testifies to her role in the history of salvation. Mary is the one who encourages Jesus to act. Mary intercedes on behalf of the hosts of the wedding and Jesus responds to her. And just as Jesus responds to Mary’s intercession then so also he responds to her intercession today. This means of course when we ask Mary to intercede on our behalf with Christ, we have a powerful advocate on our side.

But we should also think about the servants. They are the only ones who recognise what has happened. Everyone else just enjoys the wine ignorant of its provenance; the servants, however, know what has happened. And there’s a message there for us. To recognise what Christ is doing in a particular situation we have to be part of that situation. The servants knew what was going on because they were part of it and it’s the same for us. What Christ does won’t always be obvious to us but nevertheless he’s there at work in our lives and in our world. And we have to make an effort to involve ourselves with Christ so that we too can see what he’s doing.

So there are at least three things going on in the wedding feast at Cana. We’ve got Christ revealing himself as divine and beginning the public phase of his mission. We’ve got Our Lady showing the influence she has with Christ and showing what can happen if we avail of her intercession. Finally, we’ve got the servants seeing what happened, becoming a part of it, and understanding what’s going on. Each element of the feast is important; each element has a message for us. Let’s take it all on board and put it to practice in our lives.

Photograph by Fr Lawrence Lew OP of a ceiling painting in the church of the Holy Rosary in Portland, Oregon. 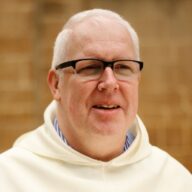