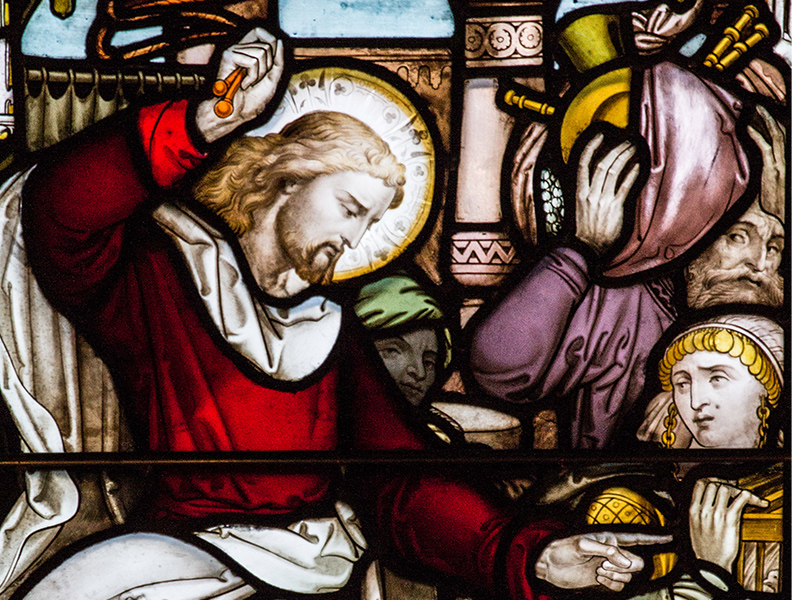 Third Sunday of Lent (B)  |  Fr Richard Ounsworth explains the cosmic significance of Christ’s cleansing of the temple.

There is surprisingly little in common between St John’s Gospel and the other three. Apart, of course, from the bare facts of Jesus’s life, notably his crucifixion, there are very few stories from his biography that all four agree on. But today’s tale of the ‘cleansing of the temple’ is such a one, and all four Gospels see this incident as closely related to Jesus’s death. This is not simply because Jesus was just making himself a nuisance and causing a fuss – even a potentially explosive fuss at the biggest event in the Jewish year – but because by his actions Jesus was seen to be making a claim about himself, one that was absolutely unacceptable to the religious authorities of Jerusalem.

This is very obvious in the account that we read today. ‘What sign have you to show us for doing this?’, he is asked. In other words, ‘Who do you think you are, and why should we believe you?’ Now Jesus gives an answer, but a cryptic one, which is naturally enough misunderstood, at least until the resurrection, when the sign is fulfilled. But in fact what he has done is itself the sign that justifies his action, if we recognise the point of his saying about making the temple a ‘house of trade’.

Naturally we take this to mean that Jesus is against selling things and changing money in the temple. We may ask ourselves whether he would express equal displeasure at copies of Catholic newspapers and fairtrade instant coffee being sold at the back of church. But this would be quite to miss the point. Without the sellers of animals for sacrifice, animals that were guaranteed to be acceptable according to the Law of Moses, there could be no sacrifices. Without the money changers, taking the unacceptable Roman coins and turning them into Tyrian shekels, no-one could offer money to the treasury or pay the temple tax that every Jew took pride in paying. In other words, Jesus is not just trying to get rid of a few corrupt practices that have crept in to mar something he basically approves of; no, he is trying to put a stop to the whole thing.

And this is because Jesus brings, in his own person, the fulfilment of the prophecy of Zechariah – in fact the very last verse of his prophesying, which says that ‘there shall no longer be a trader in the house of the Lord on that day’. On what day? On the day of the Lord, when the Lord shows himself to be King over all the earth, when all the nations of the earth will be gathered into one, and when ‘living waters shall flow out from Jerusalem’. On the day of the Lord, the temple is no longer needed, because the whole world is sanctified by the presence of the Lord.

Jesus claims to be the one who brings in this day of the Lord. Indeed, when he is nailed to the cross, Pilate will truly – though he does not mean to be truthful – proclaim that here is the Lord enthroned as King. From that Crucified King living waters will indeed flow out from Jerusalem to bring life to the whole world, on the day when zeal for God’s house does indeed consume him. What is this zeal? On the one hand, it is the misplaced zeal for the status quo, the present arrangements which, for the priestly powers, are working out very nicely thank you, and they will not stand for anyone who threatens their tottering authority. Or perhaps they are not so cynical: after all, the temple was a great institution, it was the place where God had chosen to make his dwelling among humanity and invite his chosen people to celebrate his mercy by participating in the sacrifices established by Moses. All of that, important though it was, was but a sign pointing towards its fulfilment, the astonishing fulfilment that came in the person of Christ. Perhaps we are all guilty, from time to time, of loving the outward signs more than the inward reality.

But more importantly, the ‘zeal for your house’ that consumed Jesus is also Christ’s love for God’s true house, which is the whole world, and which is every human heart that welcomes his Spirit of truth and love.

On the Cross Jesus died for love of us, as zeal for our hearts consumed him. Today, will we decide again to accept that life-giving love, and die to sin for love of him?