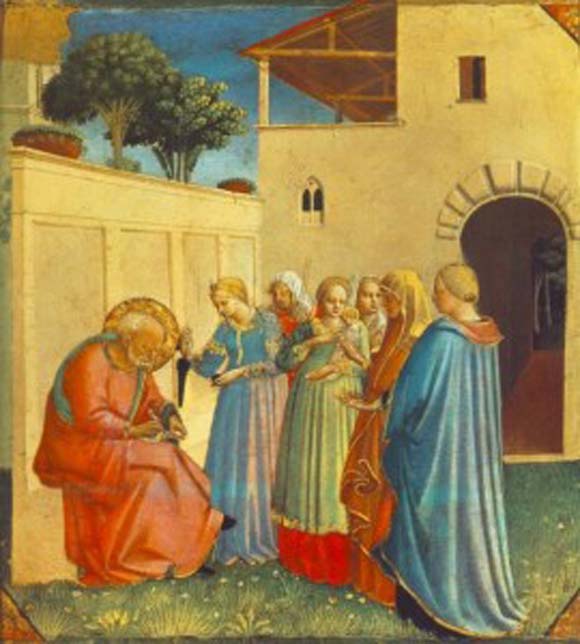 
What is the price of your doubt? When Zechariah doubts God’s plan, he loses the ability to speak. His lack of voice comes at the most inopportune time, as he is serving as priest in the sanctuary. Fortunately, his loss and eventual regaining of speech is part of God’s plan. For when he sees his son, John the Baptist, and finally believes the message of the angel, he sings a song of praise to God that the whole world hears. Zechariah, a man who doubted God’s power and plan, now shouts words that each morning will echo from the mouths of Christians for thousands of years.

The Benedictus, Zechariah’s canticle, unites the history of God’s covenant with the saving work we begin to commemorate this evening. He reminds us of God’s promise throughout the Old Testament, that He would “save us from our enemies, and from the hand of all who hate us,” and “show mercy to our fathers” (Luke 1:71-2). It is from Zechariah that John the Baptist first hears his mission. His tender infant ears hear his father’s proclamation: he would be Prophet of the Most High, announcing His way.
Zechariah’s praise demonstrates the power and mercy of God, and the capacity of man to change in light of God’s grace. For when he doubted the message of the angel, Zechariah could only see his own limitations – he and Elizabeth were advanced in years and unable to bear a child. He could not open his mind and heart to the angel’s message. Zechariah could not see through his own shortcomings how God could elevate him and his wife as the parents of the Messiah’s great forerunner.
When Zechariah sees his child, he sees in him God’s promise fulfilled. What great faith he demonstrates in his conversion! He does not have to lay eyes on the infant Christ or even hear him preach as an adult. He requires no further evidence. Zechariah takes one look at his son, the Forerunner of the Messiah, and immediately sees the whole of salvation history. He understands how every event in Scripture has led his people to this moment before dawn, when his son will announce the Christ.
At some time in our lives, we all fail to see how God can use us to fulfill His plan. There is no shame in our initial doubt. However, at our moment of conversion, we must follow Zechariah’s example. When we recognize God’s action in our lives, however great or small, we must respond as God commands and sing our praise to God. Others may initially look at us in confusion, just as the crowd did with Zechariah’s naming of John. But, he did not hold back from doing as God commanded, and God granted him the ability to sing words of eternal value.
We have less than a day before we enter the Christmas Season. As you make final preparations, consider how God tries to work in your life. Look for the places where He calls you to act. And sing God’s praises with confidence and joy as a witness to the Good News.