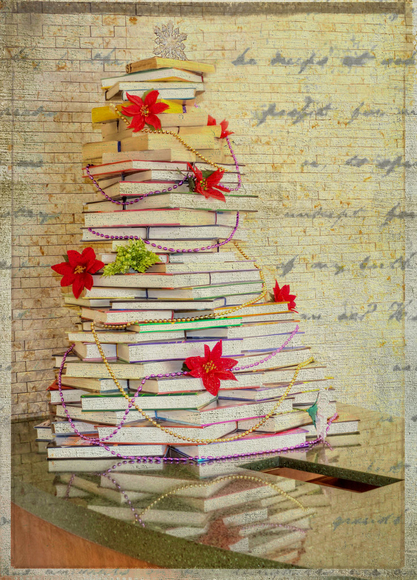 Scared that you are going to be bored this Christmas? What to do with those 12 days? The student brothers recommend some seasonal reading that might take your fancy (and you might wish had taken your stocking!).

Br Albert recommends… Erasmo Leiva-Merikakis, Fire of Mercy, Heart of the Word: Meditations on the Gospel According to St Matthew

“Christmas is a great time to read long books, and this is a long book. Good commentaries on the Scriptures can be a really helpful thing, and the particular value of this commentary is that it really encourages one to pause as one reads through the Gospel: and for the same reason that Christmas is a suitable moment for reading long books, it’s also a suitable moment for pausing. This book will really lend your Christmas a space for contemplation, a time to pause.”

“Vile Bodies comes to mind only because I recently finished reading it myself. While not a Christmas book as such, the narrative reaches its happy almost-ending at Christmas time on a country estate: the two bright young protagonists, Adam and Nina, find (after repeated disappointments) that they shall indeed be able to marry. It is quite typical of Waugh’s early work: a jaunty and experimental narrative, witty, cynical, obsessed with the decline and decadence of post-World War One high society.”

“The Advent Lyrics are an important collection of Anglo-Saxon poetry based on the famous ‘O’ Antiphons: we sing seven of these now in the week leading up to Christmas, all of which address Christ, but this poem draws on an extended set which also address Mary, St Joseph, and the Holy Trinity. What I really like in the Advent Lyrics is the overtly “logical” emphasis: a concern with word, speech, and truth. Anglo-Saxon poets delighted in the use of kennings to describe things: for instance, humans are ‘speech-bearers’, and the Angel Gabriel is called the ‘word-bearer’. The poem is interwoven with allusions to liturgical texts in such a way that the connection between the liturgical and logical is well brought out, for it is in the liturgy above all where we meet the reality of the historical event of Jesus’ first coming and the promise of his second.”

“Mother Teresa used to say that this was her favourite book. It makes for a deeply devotional and inspiring read from a man who may be soon to be beatified.”

“I find Chesterton is one of the few writers of recent times capable of expressing the expansive joy of Christmas in a way that is not only free from frivolity or sentimentalism, but at the same time with characteristic depth and sharp wit. There are three texts I particularly recommend. The first is ‘The God in the Cave’, a chapter from his book The Everlasting Man, where Chesterton attempted to develop a Christian vision of the history of mankind. Thus, starting from ‘The Man in the Cave,’ he comes to what he considers the culmination of this history, the Incarnation. Next is an article he wrote for a London newspaper called ‘The Theology of Christmas Presents’. He is responding to Mrs. Eddy, who protested against the worldlier elements of the Christmas celebration by refusing to give presents, and instead sitting still and thinking about Truth, Purity and Love, until it had an improving effect on her friends. Chesterton retorts that we are right to give gifts, and really concrete gifts: the essence of Christmas, like that of Christianity, depends upon the tangible and the particular. Finally, I would like to recommend his poem ‘Glory to God in the Lowest’, a celebration of the feast which can speak for itself.”

Br Thomas recommends… The Gospel According to St. Luke

“This Gospel isn’t short, but for the same reason you are likely to find your favourite and most familiar Gospel stories here. The benefit of reading the Gospel whole is that you can get a sense of the whole structure and the particular emphasis that different Gospel-writers want to put on what they tell us about Jesus. The Gospel of Luke is a good one to start with at this time of year because it is a major source for what we know about the Christmas story, and if you paced it a chapter a day you could carry it on to climax with Easter some time nearer that holiday. That way too, it would only be a small amount of reading each day, since the chapters aren’t long. But whether you read this or another Gospel, it is good at this time of year to reconnect with the Word of God: because it’s the Word’s becoming flesh that we are celebrating.”

MORE ON: BOOK AND FILM REVIEWS