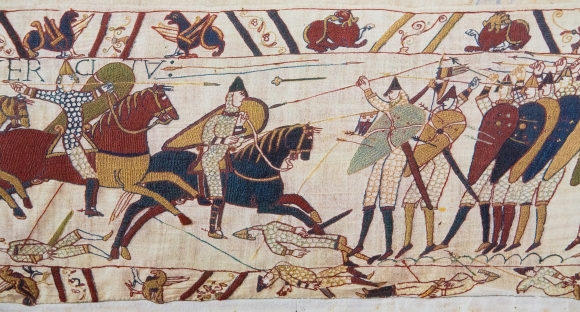 A Theory of Courage

By Br Pablo Rodríguez Jordá, O.P. | Br Pablo writes about one of his favourite books, The Lord of the Rings, and about courage, death and hope.

One of the most memorable scenes in The Lord of the Rings, in my view, takes place after the Fellowship has escaped the Mines of Moria. They have just lost Gandalf, their leader, to the enemy; their mission stands on a knife-edge. Aragorn looks towards the mountains and cries, ‘Farewell, Gandalf! What hope have we without you?’ and then, turning to the others: ‘we must do without hope. At least we may yet be avenged. Let us gird ourselves and weep no more! Come! We have a long road, and much to do.’

Though it is impossible to summarise The Lord of the Rings in one word, I would certainly choose ‘hope’ if you pressed me. The characters of the book are sent on a desperate quest with meagre chances of success: so desperate in fact, that by any ‘reasonable’ standards one would give up hope and prepare for defeat. In this way, to put it somewhat simplistically, the plot of this 1000-page book unfolds as each character in turn is tempted to lose heart, caught between resignation to impending doom or the choice to cling on to ‘something’ uncertain that defies all possible calculation.

This elusive ‘something’ has much to do with the ‘noble northern spirit’ that Tolkien discovered in the Germanic legends of the Early Middle Ages, and which occupied his attention during most of his career as a writer and an academic. He and his colleague at the university of Leeds, the medievalist E. V. Gordon, developed the concept of what they called the ‘Northern Theory of Courage’: a spirit forged in a time when the chief evil in life was death by the sword, and the freedom of an indomitable will, scorning one’s fate until the end, the only heroic response. Two lines from one of the most famous Old English poems, The Battle of Maldon, epitomise this. Byrhtnoth, Earl of Essex, has been slain in battle, besieged by Viking raiders. As his troops are scattered, a lone warrior stands by his fallen lord and summons others to do likewise:

‘Mind must be the stronger, heart the bolder,

courage must be the greater, as our might lessens!’

Tolkien pondered long about this desperate fierceness in the face of death, in which an echo still resounds of the ‘godlessness’ of a heroic age, in Tolkien’s own expression, when belief in the old Germanic pantheon was waning and, with it, all promise of an afterlife. Yet as a profoundly devout Catholic, Tolkien was drawn to what he saw as one of the most original contributions of the medieval Germanic spirit, and sought to redeem it and incorporate it into his work. One can see it in Aragorn’s sober stubbornness in the passage mentioned at the beginning, and pervading The Lord of the Rings.

But isn’t the Christian called to hope? How can one ‘do without hope’? Well, in one sense, everybody hopes: that our plans and projects shall come to fruition, that all shall be well with us. But when the world runs against our fragile expectations, ordinary hope must yield to something deeper, as gold is tested in the furnace. Tolkien’s world is strangely silent on the topic of religion: it is not a ‘Christian’ world, for there has been no Incarnation, not even the promise of a Redeemer. Yet courage and hope, transfigured through Tolkien’s art and faith, receive a universal scope. For in our world, just as in the Middle Ages which captured his imagination, Christians and non-Christians alike share a common destiny, the same certainty of eventual defeat: ‘mortal men doomed to die…’ Interviewed by the BBC in the last few years of his life, Tolkien gravely remarked when asked about the ‘key’ to The Lord of the Rings: ‘any large story that interests people or can hold their attention for any considerable time … all human stories … are practically always about one thing, aren’t they? Death. The inevitability of death.’

The pagan heroes Tolkien admired saw their hopes dashed but stood undeterred, masters of their own destiny. In the world of The Lord of the Rings, however, reliance upon self is not the characters’ only resort (though they could not succeed without it). One can glimpse something else at work, a Providence ordering human events to a good end, exceeding our powers of comprehension, yet indelibly present in the course of the story. From their limited perspective, each character’s fortune may seem uncertain, their choices and efforts doomed to failure, but a power beyond their control drives each character’s path into a larger narrative, like many-coloured threads woven into a majestic tapestry. This awakening to the action of Providence, it seems to me, was Tolkien’s way of redeeming the ‘noble northern spirit’. Courage need no longer be tinged with despair. For the Christian, it is not merely a response to danger and fear, but a virtue born out of hope beyond all hope, of the promise that no matter how desperate a situation may be, nothing is impossible to Him who is the Lord of History, and death shall not have the last word.