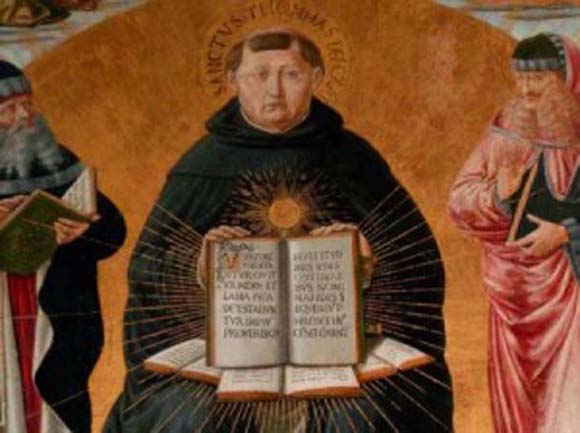 Fruits of Study 7: Esse and Essentia

By Robert Verrill O.P.
32
St Thomas’ second argument in the Summa for God’s existence goes along the following lines: in the universe, everything we sense has some cause, nothing can cause itself to exist and there can’t be an infinite series of causes. Therefore there must be a first cause, and this we call God. This cosmological might at first seem susceptible to some serious objections: if God can exist without being caused, then why can’t other things exist without being caused? Why can’t there be lots of first causes? Aquinas’ argument for the distinction between esse and essentia in his short work, De Ente et Essentia can help us to respond to these objections.

Essentia and esse are rather technical terms for St Thomas, but roughly speaking they correspond to the two operations of the intellect: we can understand what something is, and we can understand that something is. Essentia is that within something by which we understand what it is; the essentia determines the specific manner of somethings existence. Similarly, esse is that within something by which we understand it to actually exist; it is because of a thing’s esse, because of its act of being, that something is actual, real, existing. Everything that exists must have an essentia and an esse.
The fact that we might understand what a unicorn is (its essentia) without knowing whether it exists (i.e. has an esse) suggests that essentia and esse are different. But does this difference in our understanding correspond to something in reality, or is it just the way our minds work which makes us think essentia and esse are distinct? St Thomas says it’s the former – esse and essentia are really distinct. He uses a rather subtle argument to show that essentia and esse are distinct in reality for any essentia that can be in more than one thing. For example, human nature (an essentia) can be in two different human beings, and therefore there must be a real distinction between a person’s essentia and their esse. A corollary of this is that there can be at most one thing whose essentia and esse are identical. Such ‘a thing’, if it existed would be pure existence. In De Ente et Essentia, the question of whether God exists is the same as the question of whether pure existence exists. This is not obvious – after all Aquinas doesn’t believe in pure whiteness or pure heat, so why should he believe in pure existence?
His argument for pure existence is rather like the second way argument in the Summa: everything that belongs to something must depend on its essentia or arise from something extrinsic to it. For example, a person’s tendency to laugh depends on their human nature, but a person’s knowledge also depends on some external reality. Now everything possesses an essentia and an esse, and a things esse cannot come from its essentia because the essentia depends on the esse for its actuality, and so a things esse comes from something extrinsic to it. This extrinsic thing must also have an esse and essentia, and so we can apply the same argument again to show that the esse of this extrinsic thing must also be caused by something else extrinsic to it. Now this argument can’t go on for ever; the argument can only stop if there is something whose esse and essentia are identical. This is the first cause. It is unique, it depends on nothing else, and everything in the universe depends on it. And this is what we call God.