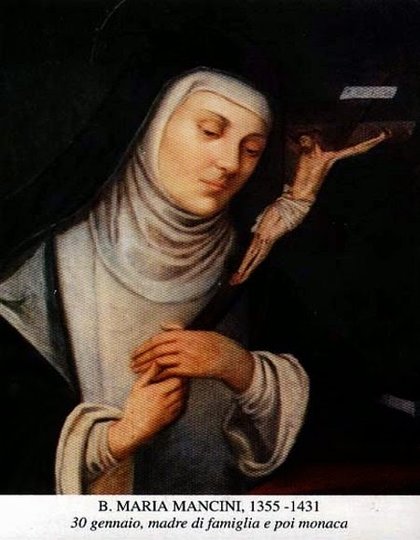 If you were told of someone, aged twenty-five, twice-widowed, who had lost all seven of her children before their teenage years, you wouldn’t begrudge them seeking to hold on to what little they still had left. But holiness often confounds our expectations, and Blessed Mary Mancini’s life (1355-1431) is a case in point.

Her response to her predicament was to throw herself into an ascetical life of prayer, good works and discipline of the body, in which she gave all that she had to the poor. She, who had lost everyone, took those who had nothing into her own home and nursed and tended them.

In her dedication to the most poor and vulnerable of society, we may be reminded of St Catherine of Siena, and, in fact, these two great women met when St Catherine visited Pisa, Mary’s home town. The two prayed together and were drawn into a holy friendship.

It was on the advice of Catherine, a lay Dominican, that Mary chose to enter an enclosed convent of nuns of the Dominican Second Order. She took to this new life with great zeal and desired to live the life fully and unstintingly. This led her, along with Blessed Clare Gambacorta and some other members of the convent, to found a new convent of stricter observance. In due course, she would become prioress of this new community and was reported to have exercised her position with great justice and holiness.

Whilst she was blessed with visions and mystical experiences, she is not as famous as Catherine, but nonetheless we can still learn from her life. First, we can learn from her prudence and humility, in listening to the counsel of the best and holiest of her friends, when seeking her path in life. Second, in her recognition that when things were at their worst, she needed to turn ever closer to God, not to shut herself off from the only true source of hope.

In this last respect, she reminds me of so many patients who I have been privileged to meet in hospitals, whilst taking communion to the sick. Here I have met people who, by the standards of the many, have very little to be grateful for – or to hope in – yet radiate a contentment and a faith, which has humbled me. In the example of these holy patients, the life of this 14th century saint is made that bit more real.