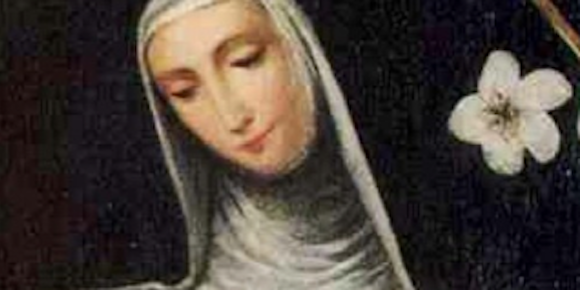 It reads almost like a Disney film script, with a bit more religion thrown in. But is the tale too incredible for belief?

Legend has it that a young English princess called Euphemia (meaning ‘well-spoken’) was very pious and loved to pray. She took a vow of virginity and wanted to dedicate her whole life to God. But the king, her father, insisted that she marry. She asked for three days’ grace to prepare in prayer, but afterwards they discovered that she had fled the country disguised as a maid. Arriving in Cologne, she changed her name to Gertrude and began caring for the sick poor at the hospital, while spending much time in prayer and at Mass. A jealous old woman planted some stolen silk in her bedroom and ‘Gertrude’ was arrested and placed in the stocks.

As (bad) luck would have it, knights from her father’s court came looking for her and arrived just at that moment. Ragged and publicly shamed, Euphemia was somehow recognised by one knight, who insisted on questioning her about her origins. Euphemia replied that her father was hanged as a public criminal and eleven of her brothers died a similar way – referring cryptically to Christ and the apostles – and joking that she was equally disreputable!

Once free, she joined the Dominican monastery at Pfortzheim as a humble laundress, living apart in a small cottage. She was allowed to make profession as a secular Tertiary, serving the noble-born ladies who constituted the community of Second Order nuns. Her holiness was manifested not just in her daily chores but also in a miracle, when a visiting pilgrim saw her transfigured in light. ‘Gertrude’ declined an offer to become a choir sister, preferring her lowly occupation.

Eventually her origins were discovered after she fainted at hearing the news of the death of an English prince in battle. The noble nuns were shocked at the revelation that their laundry had been looked after by a royal princess all that time. Again, Euphemia resisted the invitation to join the community and continued to live a holy and humble life in her laundress’s cottage. Thus, Euphemia of England lived happily ever after, but died in February 1367.

So, is the story true? No elements in the tale rule it out as impossible, and we have many more reliable accounts of similar holiness and humility among high-born saints, including the Dominican St Margaret of Hungary, and the Franciscan St Agnes of Prague. Nevertheless, the historical claims of the Euphemia story do not add up: she is claimed to be the daughter of Edward III, hence brother of John of Gaunt and the Black Prince, but no such daughter is known to historians. Similarly, none of Edward’s sons died in battle in the years leading up to Euphemia’s own death in 1367 (or would she have fainted at the news of a princely cousin’s death?). We have records of a ‘Euphemia of England’ born in 1101 to Henry I and Edith of Scotland, but she died young, and certainly could not have joined the Dominican Order a century before its foundation! And we have no records of a Saint or Blessed Euphemia in the Order, though of course very few of our holy women and men have been officially recognised with such titles.

At the very least, the existence of Euphemia of England in the chronicles merits her entry in the Biographical Archive of the Middle Ages (F. 111, 399), and her story is recounted in Sister Mary Jean Dorcy’s Saint Dominic’s Family: Lives and Legends (1964). Whatever her precise dates and parentage, the account of this holy and humble princess-turned-Dominican recommends her for our attention and emulation as a great Dominican. And perhaps we should try selling the rights to Disney!