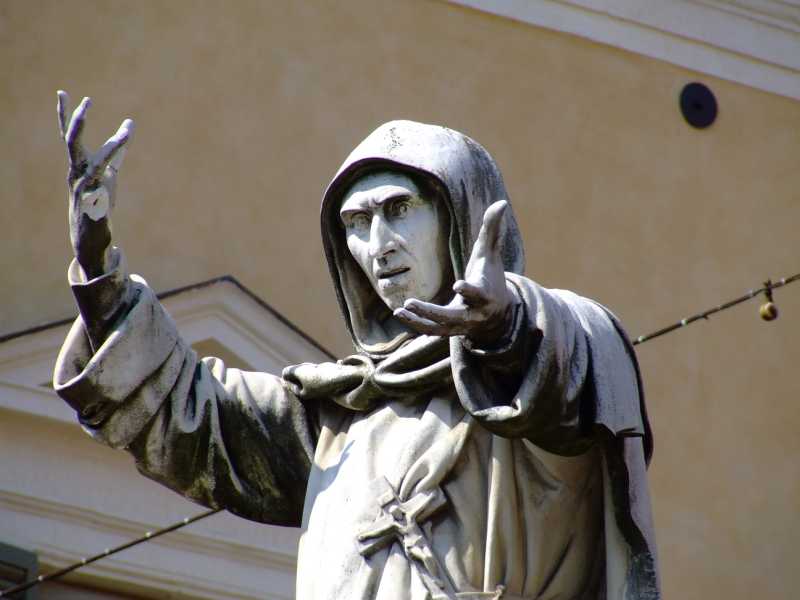 Savonarola was a Dominican friar who lived at a time when the Church had a great power and influence in the city states of Italy. The Papacy, as well as the clergy, often furthered their own personal interests and those of the ruling families in Europe, such as the Borgia Popes.
Girolamo Savonarola joined the Dominican Order in 1475. This was a time when there was a relaxation of adherence to the strict ascetic common life of the friars, as set up by St Dominic from 1216 until the mid 14th century. Savonarola, who strived to live the ascetic life, had a love of scripture as well as conventional piety. From an early stage in his life as a friar, Savonarola wrote on the ‘ruin of the church’ in poetry. He saw Rome avid for ‘ecclesiastical dignities and carnal pleasures, committing grave sins in the confidence God will take no revenge’. This would seem to be an accurate description of the behaviour of the Pope at the time of Savonarola’s public life, Alexander VI. Keeping mistresses, having offspring and failing to live up to chastity and celibacy were common practice in Roman circles.
Donald Weinstein opens the prologue of his book “Savonarola: The Rise and Fall of a Renaissance Prophet” asking the question, ‘Was Savonarola was a God-intoxicated visionary or a thrusting opportunist?’  In his book, Weinstein documents the build up of Savonarola’s preaching in Florence, and the particular style in building up his audiences through prophetic sermons, and in his condemnation of the vices of Florence.
Extreme poverty and disease prevailed in medieval Renaissance Florence. But in addition, a degraded morality prevailed in the mercantile city. The city was rife with gambling, prostitution, taverns encouraging drinking and debauchery, and also widespread sodomy as well as the sexualisation of children (particularly boys). There also existed at the time of Savonarola, street gangs of boys and young men who lacked a proper role model, and who were caught in a cycle of immoral lives and poverty, often harassing passers by, and being largely un-policed in the city state. Savonarola started up groups to recruit these feral groups of youth, and converted them to a pious army of ‘volunteer’ police in a war on vice. Savonarola was of course famous for encouraging the bonfire of the vanities in Florence, where objects such as cosmetics, art, and books were burned as such objects might tempt one to sin.
Preaching and political thought
Savonarola was a lector at a novice house and wrote various textbooks: the Compendium Logicae was completed in 1484, followed by Compendium Philosophiae. One key point of interest is his view of the state as a political community and natural association of households and other small groups of humans, organised for the purpose of living well. To this end the community makes laws to prevent ignorant and wicked people from oppressing others and doing evil (for according to Savonarola, without law people are brute animals, and if heavily armed and without the restraint of law they are a danger to others). His philosophy and ideas on politics and government are documented in his book on Compendium of Morals. An opposition to commerce, and a politics of promoting the ‘middle’ sort – that is those who do not acquire great wealth, nor live on the end of extreme poverty – is the ideal for avoiding the extremes. Savonarola placed the idea that service to the common good was a Christian as well as civic virtue. In his medieval worldview, society was a moral community, united in the search of God’s grace.
Constitutional reform and theocracy of virtue
The practices of the ruling council of the city of Florence were contrary to Savonarola’s ascetic philosophy and religious-political beliefs. Savonarola advocated in his revolt against a corrupt Florence council, ‘popular republicanism’ although omits discussion on political liberty and extension of the franchise. Savonarola became politically involved as a friar, and secured limited reform of the council chamber in Florence to increase the number eligible to vote, as well as a dilution of the power of the ruling elite who held power over the city. He was part of a movement for fairer taxes and lessening the burden on poorer citizens; also in making vices illegal throughout the city to ‘clean up’ the immoral practices.
Savonarola’s fundamental religious thought
In his preaching, Savonarola made use of the book of Apocalypse, as well as ‘fire and brimstone’ prophesies that would predict the downfall of the social order in the region, informing the congregation to repent for their sins as the end was nigh. Weinstein expresses that many of the prophesies Savonarola preached on were either predictable, or when proven incorrect Savonarola denied the preaching took place. Some of the radical and extreme religious thought of Savonarola included:
In 1495, Savonarola was summoned to Rome in order that the Pope could address his concerns over Savonarola’s preaching, particularly as the Florence population ended up unwilling to join a Holy League against the French. In 1497, Savonarola was excommunicated by Pope Alexander VI, and in 1498 was hanged in Florence at the age of 45. 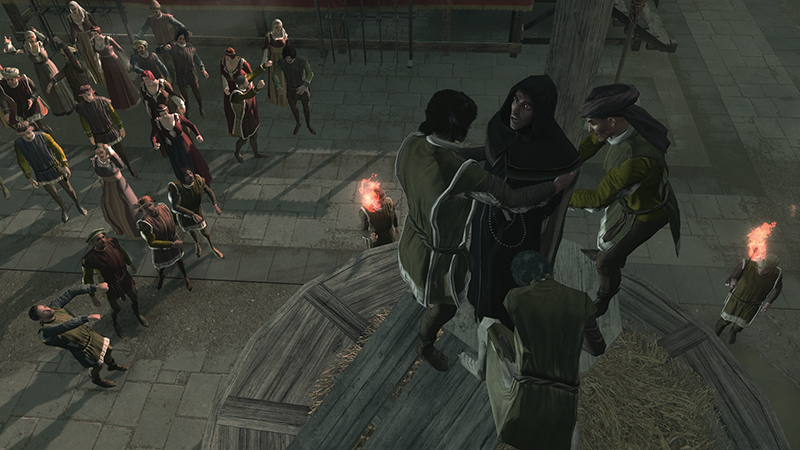 Execution of Savonarola (from Assasin’s Creed)
The issue of Savonarola’s prophetic legitimacy is better left to theologians, but his story did interest Machiavelli in ascertaining the reasons for Savonarola’s downfall. According to Donald Weinstein, “Machiavelli derived a fundamental lesson in the art of statecraft, namely, that given the natural inconstancy of humankind, polities tend toward entropy. Just as state building requires vision, so the new order must have force at its disposal in order to sustain it. Prophets like Savonarola who do not have force at their command are reduced to hectoring and fakery, symptoms of impotence”.
Savonarola had a dismal ending, but continues  to fascinate authors of fiction as well as historians and such commentators.
Categories:
Dominicans, Great Dominicans