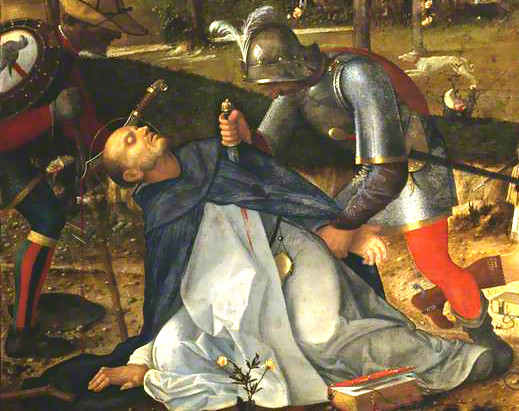 Preaching is in fact a dangerous activity. The life of Peter of Verona, often called Peter Martyr, illustrates one dimension of this danger.

One of the earliest members of the Order of Preacher, St. Peter preached vigorously against the heresy of the Cathars despite threats against his life. Due to his efforts, many Cathars converted to Catholicism, leading a group of Milanese Cathars to plot against him and to hire an assassin, one Carino of Balsamo. On April 6th, 1252, Carino and an accomplice set upon Peter and his companion as they made their way from Como to Milan. Carino struck Peter’s head with an axe and Peter rose to his knees, recited the beginning of the Apostle’s Creed and, according to legend, dipped his fingers in his own blood and wrote on the ground: “Credo in Unum Deum” before dying.  It would seem that preaching is a dangerous business.

However, Jesus concludes the Beatitudes by telling his disciples “Blessed are you when men revile you and persecute you and utter all kinds of evil against you falsely on my account. Rejoice and be glad, for your reward is great in heaven, for so men persecuted the prophets who were before you.” Martyrdom is in fact a blessing. Yet preaching remains dangerous even when the great reward of martyrdom is off the table.

Consider what Blessed Humbert of Romans wrote in his Treatise on Preaching:

There are three evils to be noted which result from a premature and rash acceptance of the office of preaching.

The first is that the good results which the preacher might have produced at the proper time will be imperiled. It is necessary, St. Gregory informs us, to warn those, who, because of their age or their incompetence, are unsuited to exercise this office, and who nevertheless meddle in it prematurely; for their rashness endangers the good results which they would later have achieved. Eager to undertake what they are not prepared for, they lose forever the good they might have accomplished at the right time.

The second evil resulting from too early entrance into the office of preaching is the obstacle which the preacher places in the way of his own formation; for whoever undertakes a task before he has the necessary strength makes himself for the future weak and useless. As one author of the lives of the Fathers admonishes: “Refrain from instructing too early, for you will thus weaken your understanding for the rest of your life.”

The third evil is the danger of the preacher losing his own soul. In regard to this St. Gregory wishes that those who are impatient to assume the office of preacher to consider the fledglings which, before their wings are strong enough, try to fly into the skies, but soon fall back to earth; or to consider a foundation newly-built and insecure, which, instead of becoming a house when the superstructure is added to it, rather collapses and becomes a pile of ruins; or to consider those infants born prematurely before being completely formed in the womb of their mother, and who fill graves rather than homes.

The innumerable evils resulting from haste prompts Ecclesiasticus to say: “A wise man will hold his peace till he see opportunity” (Ecclus. 20:7).

It is also for this reason that Isaias gives the following warnings: “. . . and it shall bud without perfect ripeness and the sprigs thereof shall be cut off with pruning hooks: an what is left shall be cut away and shaken out. And they shall be left together to the birds of the mountains and the beasts of the earth: and the fowls shall be upon them all summer, and the beasts of the earth shall winter upon them” (Isa. 18:5-6).

And finally, it is for the same reason that our Lord Jesus Christ before His Ascension, commanded His preachers, the Apostles, “Wait here in the city until you be clothed with power from on high” (Luke 24:49). St. Gregory, explaining this, says: “We remain in the city when we retire into our innermost soul, not venturing forth with idle words, but waiting the coming of the divine power, before we appear before men to preach the truth which we now possess.”

Let us then carefully prepare ourselves for the Holy Preaching. Holy Father Dominic, pray for us.