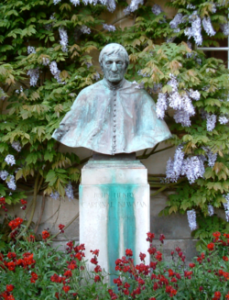 Alas the Holy Father will not be visiting Oxford during his visit, which is a shame as this seat of learning is most fitting for a scholar of Pope Benedict’s standing. It is also of course the city and university so central to the life of Cardinal Newman. He entered Trinity College in 1817: a bust of him stands there today. He was a talented student and five years later was elected a fellow at Oriel: a window was dedicated to him there in 2001. He received Anglican orders in 1824 in Christ Church Cathedral and then went to work in the poor parish of St Clements in the east of the city. Three years later he was appointed Vicar of the University Church of Saint Mary the Virgin. There, his spiritual influence on his parishioners and the members of the University was enormous. He also worked as a college tutor, and began to research the first of the many theological works which were to put him at the forefront of religious writers.
It is during this time that Newman became one of the leaders of the Oxford Movement. The Movement, which spread rapidly, was in

tended to combat three evils threatening the Church of England – spiritual stagnation, interference from the state, and doctrinal unorthodoxy. Newman was the at the forefront being a driving force behind Tracts for the Times, editing The British Critic and giving lectures in a side chapel of St. Mary’s on the via media, the middle way of Anglicanism between Roman Catholicism and popular Protestantism. In 1839 his study of the Monophysite and Donatist heresies and on the works of the Church Fathers first raised in his mind a doubt as to whether the Anglican position was really tenable. So began a period of soul searching and discernment.
By 1841 he felt that he was “on his deathbed as regards membership with the Anglican Church.” The British-Prussian proposed joint Anglican-Lutheran bishopric of Jerusalem convinced him that the Church of England was not apostolic. He withdrew to Littlemore in a house in College Lane, under a rule of strict monastic discipline. In 1842 he retracted all he had said against Rome and resigned the living of St. Mary’s Parish. Three years latter he was received into the Catholic Church by Blessed Dominic Barberi. The current parish of Littlemore is dedicated to this great Passionist (who is also closely associated with the Dominican Sisters’ convent at Stone).

Newman then left Oxford and did not return until 1878, when he was elected as Trinity’s first Honorary Fellow in 1878. Nevertheless’s presence is still felt in Oxford. In 1858 Newman proposed a branch house of the Oratory at Oxford. This project did not bear fruit in his lifetime but in 1990 the central Oxford parish of St. Aloysius was entrusted to the Birmingham Oratory. In 1993 it was established as an independent congregation. A new chapel dedicated to Newman, designed by Anthony Delarue, is planned for the Church.
In 1888 the Catholic Club of the University renamed itself the Newman Society. It continues to play an important part in Catholic life within the city and the University and has become a model of Catholic student societies throughout the English-speaking world.